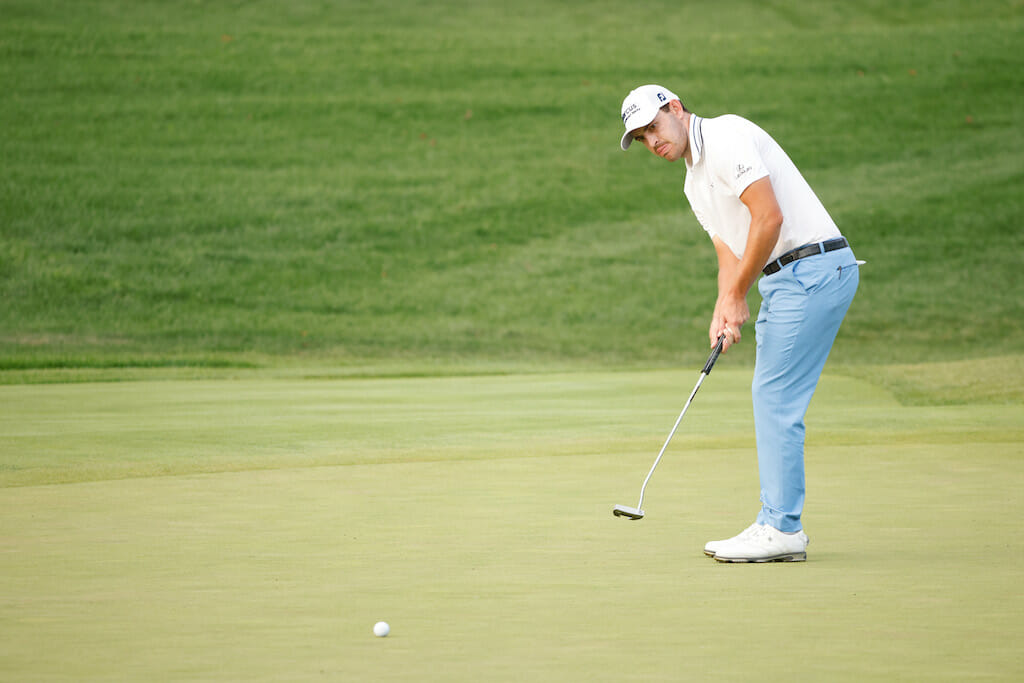 There was an enormous reward for all those who sat-up into the first half-hour or so of Monday morning (Irish time) watching TV coverage of the final round of the BMW Championship from the outskirts of Baltimore.

The sight of Patrick Cantlay going head-to-head with Bryson DeChambeau was simply riveting and watching the two Americans fight it out for the title not just over 18 holes but then six extra holes meant there was no way you could surely hit the sack not knowing the outcome.

There had been 39 prior play-off holes in the 2020/21 PGA Tour season but the extra half-a-dozen holes on the Caves Valley course were undoubtedly the most exciting. Here was DeChambeau launching missile after missile with his Cobra Radspeed driver and Cantlay, just two-years older, putting his trust in his Scotty Cameron Phantom X-5 putter.

After going hammer-and-tongs for 72 holes the duo could not be separated, ending regulation play tied at 27-under par and with daylight a distant third. It was the lowest four-round total on a genuine par-72 course in PGA Tour history, three fewer than the previous record set in the 2019 Shriners Hospital Open.

Three times over the opening play-off holes, DeChambeau had the chance to put away Cantlay but on each occasion his putter let him down. Then at the fourth extra hole, the 18th, DeChambeau leaked his drive right with his ball taking one bounce and landing in the water feature running all the way up the right side of the hole.

For the first time in the play-off, it was DeChambeau needing a saving par and he managed that in holing a five-footer pin-high left of the flag, so back it was to the par-3 17th.

Cantlay landed his tee shot to about 10-feet only for DeChambeau to put his ball to around six-foot from where both holed out for birdie. Now the commentators were talking of how dark it was becoming with suggestions there was about enough light for maybe two further holes. Surely, it could not go into a second straight Monday finish?

Cantlay then delivered the outcome with his approach shot into the 18th to 17-and-a-half feet short of the flag but with advantage to his younger rival who was some six-foot right and again pin-high.

Then for a first time in 78 holes ‘cool-hand’ Cantlay displayed emotion clenching his right hand and producing two fist pumps in holing his birdie putt. Now for a second time in the play-off the pressure was back on DeChambeau in needing to hole a 12-footer but horribly let slip a ninth PGA Tour title, in the process handing an automatic first Ryder Cup cap to Cantlay.

Cantlay, now top of the FedCup points table, hit 83.33% of greens over the four rounds and then proceeded to hole 537.5 feet of putts in regulation to become the third PGA Tour winner since 2003 to make over 500-feet of putts en route to victory. No surprise, he was asked about his putter.

“I actually switched to Phantom X-5 through two rounds last week, so I think I took it out on Saturday last week, and I have been working with the guys over at Scotty Cameron all year since I got into this new putter around maybe Wells Fargo was the first week, I put this model in the bag,” he said.

“I finally have one that feels absolutely perfect, and I can’t thank those guys over at Scotty Cameron as they sent me a ton of putters, and I got the magic one now.”

Looking at DeChambeau’s driving stats he hit 64.29% of all Caves Valley fairways, the same percentage as Cantlay but he hit 16.66% less greens in regulation than Cantlay. DeChambeau still tops the charts in ‘average driving distance’ with Cantlay well down in 50th place.

So, after sitting-up all night and first glued to ‘the box’ in seeing Shane Lowry produce a closing 65 to hold onto the ninth and last qualifying spot for the European Ryder Cup, we then delighted in seeing Rory McIlroy grab fourth for his second-best finish of the season.

Though nothing could have prepared you for what unfolded in deciding the eventual winner. Given the enormity of the event and in the FedEx Cup standings bigger picture, it was the most nail-biting play-off I’ve watched in a long time

Though in the end it was that old golfing adage coming to fore that when the chips are down, it seems yet again a good putter of the ball will always beat a great driver of the ball.