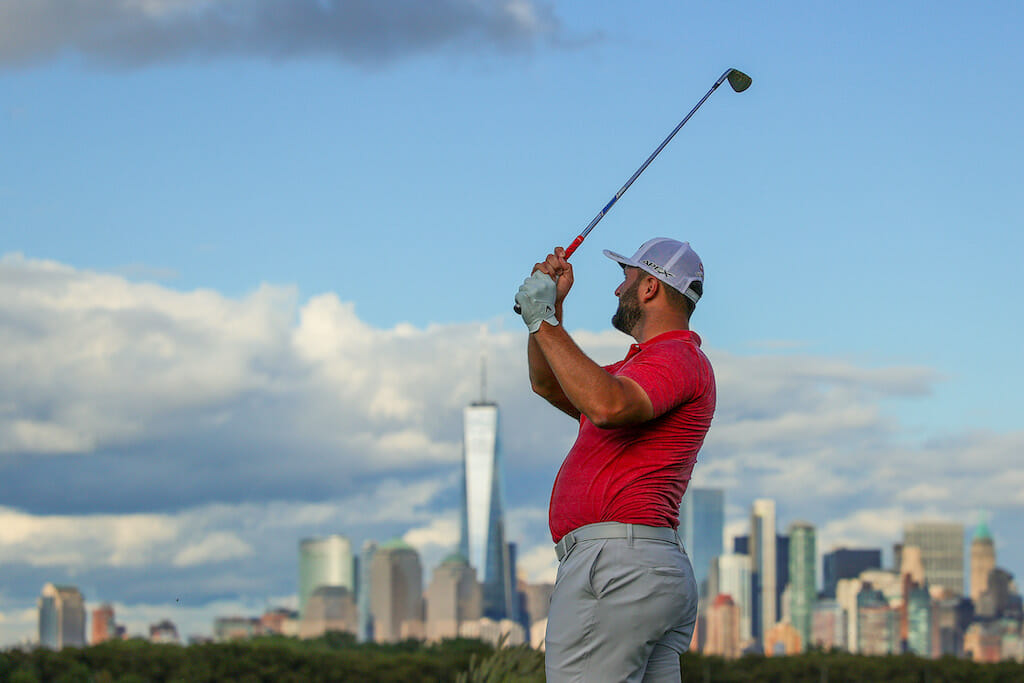 How is this for an introduction? “We’d like to welcome World No. 1, FedExCup No. 2 and defending champion of the BMW Championship, Jon Rahm.”

No issue with the PGA Tour press officer but it was less than 24-hours after Rahm had finished third in the Northern Trust, his third straight top-3 finish of the PGA Tour season. The Spaniard won the U.S. Open, shared third place at The Open and now has a third along the shores of the Hudson River.

His Northern Trust disappointment was not near as gut-wrenching some months back when informed in front of the whole world that he had to withdraw from The Memorial. No, on this occasion waiting for him at the back of the 18th green was his wife Kelley and four-month-old son, Kepa.

“It’s not digesting, it’s learning from and thinking about and analysing what I did, what my thought process was in each moment and what I could have done better and what I did really well,” he said in response to using the word ‘digesting’ a day earlier at the close of his play at Liberty National.

“But I’m going farther back, and if something like this ever were to happen again, I need to get the speed of the greens a little bit quicker and adjust a little bit quicker. It took me quite a while, and there were a lot of missed putts early on. The four birdies I made were literally tap-ins, all of them. Tap-ins or two-putts, which I didn’t really make anything outside five feet, and I think that was the biggest difference.

“I feel like I played better than my score was showing, and at the end just a couple of bad swings really cost me.

“But that is really quick at the moment. Probably today after I hit some shots and some balls out here, when I get home I’ll think about it a little bit more, but still haven’t really done that much of that simply because we had to get back, pack, sleep, travel. I haven’t really had time to think about it.

“I go back on, I think there’s a lot more positives to take out of it than negatives to be fair. There’s a lot of good things I did last week, and hopefully I can keep those going on, and again, what is life if not a process of learning from one’s mistakes.”

Ram revealed also what he’s been learning from talking to swimming legend Michael Phelps, now aged 36, and the most decorated athlete in the history of the Olympics with a total of 28 medals, 23 of them gold.

“You know, he’s a great guy. He’s gone through a lot, and as an athlete he’s somebody to look up to very easily,” said Rahm.

“When you’re the greatest Olympian of all time, you definitely have a couple tricks up your sleeve, a couple good moments of wisdom in that sense. You’ve got to also understand golf and swimming are very different, very different sports, and I’m not going to disclose too much on what I’ve asked him golf-wise, but he has helped me a lot.

“He has texted me every once-in-a-while when I’m doing good or bad. The last thing we talked about is trying to figure out how to play in the pro-am together, and that’s about it.

“You know, he’s been very open to my questions. Any time I have a question about anything, he would respond. The one I can talk about or that I’m willing to talk about was mainly when Kepa was born he texted me right away because he was in Colorado when his first child was born, and he flew back for the delivery, and then two days later he had to get back to keep training for the Olympics.

“He knows how hard it is to be there and then right after that, gone, I have to go train, and not see him. He did help me out with that. That’s not an easy feeling. It wasn’t the easiest thing to do, even if it’s the Masters.

“I really did not want to leave that room, but he helped me out with that. You know, at the same time he’s a great friend. Great guy to be around. Trying to become a good golfer, and that’s about it. When it comes to the advice he’s given me, yeah, I’m going to keep that for myself.”

And spare a thought for the local Baltimore journalist who had probably been thinking over his question all night and all morning that he wanted to ask of the World No. 1.

Q – When it comes to Caves Valley, what do you know about it being recognised around the world? It’s a new venue, obviously, to you guys, but what about the reputation?

Rahm’s response: “If I’m honest, I know nothing about it. Zero. Absolute zero.”

It had me laughing my head off but dare I say, yet another example that the golf world does not always sit centre in the US.

Listen to this week’s Podcast