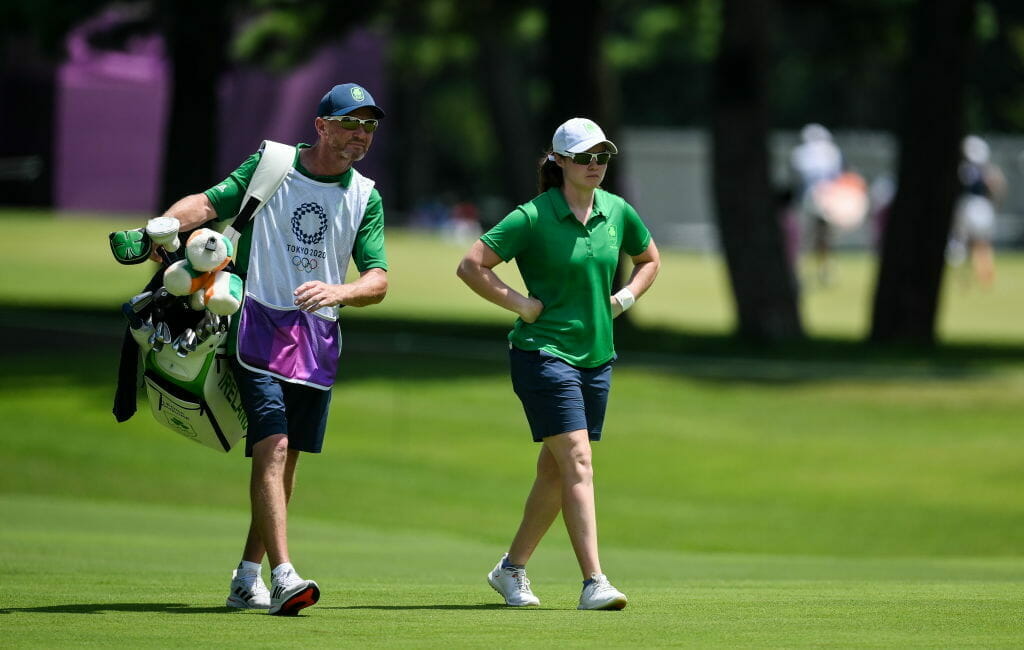 Leona Maguire and her caddie Dermot Byrne walk the 12th fairway during round one of the women's individual stroke play at the Kasumigaseki Country Club during the 2020 Tokyo Summer Olympic Games in Kawagoe, Saitama, Japan. (Photo By Brendan Moran/Sportsfile via Getty Images)

Maguire opened with three pars before a bogey on the par-3 fourth but she bounced back well with a birdie on the fifth. On her back 9, she posted two bogeys and two birdies, one of which came at the 17th when she holed a 20-foot putt down the sloping green to ensure parity for the day.

“It was mixed,” admitted Maguire of her round. “I probably didn’t give myself as many chances as I would have liked and didn’t quite have my irons dialled in, not that there was that many of them, it was mostly hybrids and woods into the greens but it was just slightly off I would say today. I holed a few nice putts to save pars and that. Just a little bit of fine tuning I think this afternoon and be ready to go again tomorrow.”

“I didn’t get the hang of my irons today but I made some good pars when I needed to to keep myself in it which is the most important thing on the first day. It was nice to pick up a birdie on 17 and a good par on 18 to finish.

“I’m happy with it (level par). There are a few tricky pins and it’s set up longer than the men’s so for us women, we’re using a lot longer clubs and it’s a case of trying to take the chances on the shorter holes.

“I felt like I was a little unlucky in spots and there were some shots that were maybe a foot or two off and I got punished for them. On 15, I hit a really nice shot in and it just stayed up on the ridge, another two inches and that would have been down beside the pin. On 16 I thought I hit a great shot and it hit the lip of the bunker and I had no shot. I’ll fine tune things this afternoon and go again tomorrow.”

The conditions are undoubtedly a contributing factor, with temperatures rising to 34 degrees Celsius and real feel touching 38 degrees. However, Maguire has been preparing for the heat well in advance with her team.

“I mean, this is hot. This is hot for everybody and it’s just a case of doing whatever you need to to keep going. This is a marathon not a sprint and I’ve been doing hot baths and stuff for a few months now,” she explains.

”This was kind of a continuation of a few events in the heat but this is the hottest we’ve had this year. I use slushy drinks and ice, it’s whole combination of things before, during and after your round. After is going to be the key to recovery with the quick turnarounds.”

With the majority of the best female golfers in the world taking part, the field is stacked with talent and it will take something special to medal.

“Yeah there’s only two of the top-30 that aren’t here I think so this is the strongest field we’ll get all year. You’re going to have to play incredibly good golf to win this week, or even to get a medal this week. It’s still only my first full year on the LPGA and there’s plenty there with more experience than me but I’m trying to do my best this week and if it’s good enough for a medal then great and if it’s not then I still have a big year ahead of me.”

Maguire represented Team Ireland in Rio and admits that she likes to think that she has matured a little bit since then.

“Yeah I mean, it’s hard to tell really how different I am since then,” she laughed. “I’d like to think that I’ve matured a little bit and have a lot more experience under my belt. I didn’t get off to the best of starts in Rio, so I was a little bit more patient today. I got a few bad breaks and tried to stay as patient as I could and stay strong. I could have let it get away from me today and I didn’t, so I’m happy with how I managed that.

“This week you’re part of something bigger than yourself. You saw that with the lads, with Shane and Rory. I enjoy wearing green, it’s an honour for me to represent Ireland, I do it every week but this is a special one this week.”

Stephanie Meadow had a different type of day and it wasn’t the opening she would’ve wanted after going three-over par through 13 holes before she dug deep to find two birdies in his last three holes to return a one-over par effort.

2 birdies in her last 3 holes and @stephmeadow20 fights back 💪

“I’m happy enough. To make two birdies coming in makes a big difference. I wasn’t overly impressed with how my irons were today but I’ll figure it out on the range and be ready to go tomorrow,” she said.

“Three over on the first day would be a lot to come back from, one-over is not so bad. I think it was just so hot out there and I was trying to stay one shot at a time and grind through it. I think I had some good birdie opportunities and it was nice to see some of them go in.

Now, like Maguire, Meadow is a two-time Olympian, but this experience in Tokyo is very different to that of Rio five years ago.

“Any time to get to wear green and represent Ireland on the first tee it’s special. A little bit of butterflies, it’s not something I experience every week. I just want to make Ireland proud, especially with everything that’s gone on the last two years, I think everyone wants to do even better for people at home. It’s been great, I wish we could go watch other athletes and cheer them on but unfortunately we just can’t do that.”

Maguire & Meadow are set to begin their second rounds tomorrow, however due to the poor weather forecast for the weekend, tournament organisers are considering alternatives to finishing the tournament on Saturday as planned. With the medical advisors’ input, it has been determined that playing more than 18 holes in one day is not possible and therefore the event may be reduced to 54 holes. Players will be notified after the close of round 2 tomorrow evening.