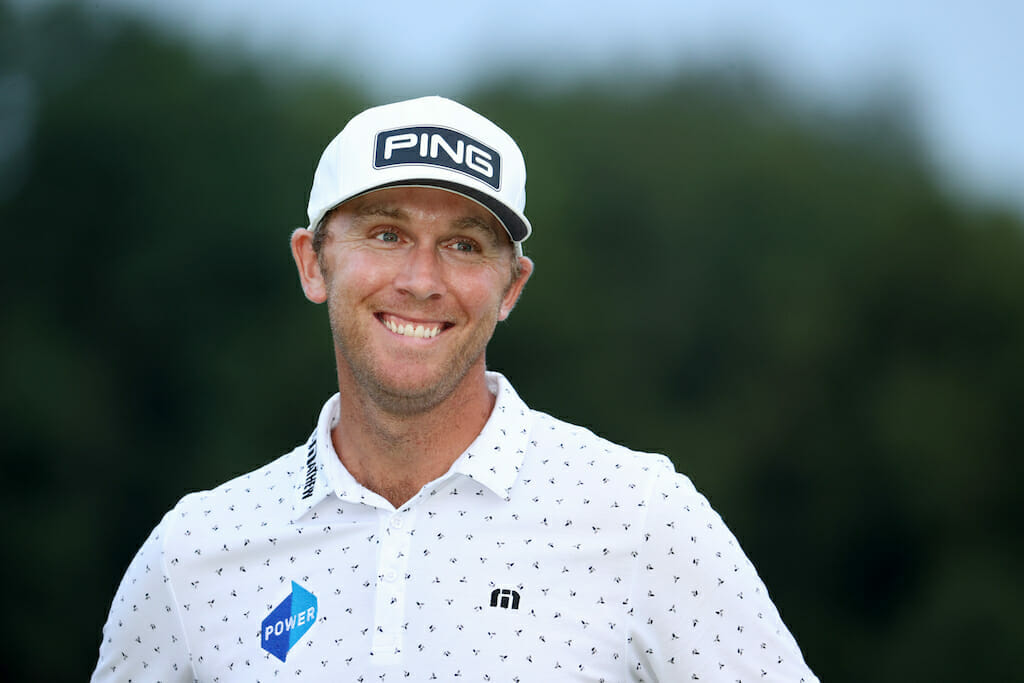 Seamus Power has singled out Tiger Woods as his inspiration after capturing a maiden Tour title with a ‘razor’s edge’ six-hole play-off victory at the Barbasol Championship in Kentucky.

For the past two months, Power has been banging loudly on a hopeful maiden PGA Tour win with a trio of top-10s and two other top-20s. Finally, in an event sponsored by Barbasol, a leading U.S. shave cream company, those close shaves have paid off with Power now joining fellow Irishmen Padraig Harrington, Darren Clarke, Graeme McDowell, Shane Lowry and Rory McIlroy as a winner on the PGA Tour.

Power did it the hard way with a second lengthy play-off in four events after American rival J.T. Poston made a mess of the sixth extra hole in finding water with his drive and leaving the Irishman two putts from 12-feet for victory.

And in claiming the $630,000 first prize cheque and with the assurance of a previously unheard of two-year Tour exemption, Power spoke of the inspiration he’s gleaned playing the same tournaments as Woods.

“For me it was a Tiger Woods influence,” said Power. “He’s the guy that you kind of saw do this in these situations. I guess a lot of people grew up watching him and that’s the kind of stuff you’re trying to copy under pressure.

“But it is amazing as there are just a couple of shots here and there. You look at the final leaderboard and I counted 10 guys who finished within two shots of the lead and they’re struggling to finish in the top-10. It’s just amazing.

“It’s why everything matters right from the get-go on Thursday morning, you’ve got to get into tournaments, you can’t let the tournament come to you it seems like anymore, and you’ve got to stay aggressive, and I was kind of lucky enough to be able to do that.”

Power was also somewhat inspired by double Major winning Collin Morikawa, revealing he managed to squeeze-in 16 holes of the final round of the 149th Open before his final round warm-up in rural Kentucky.

“Collin Morikawa today is an unbelievable example,” said Power. “He’s 24 years of age and I watched him for 16 holes and it looked like he was out playing with his buddies on a Saturday, to be honest. It was remarkable to know he won.”

Four years ago, Power was a relative unknown plying his trade on the secondary KornFerry Tour until picked by Harrington to be his 2016 Ireland Olympic Games team-mate in Rio. This was after the likes of McIlroy, McDowell and Lowry chose not to travel to Brazil due to fears over the Zika virus.

In those four years, Power has fought hard to get back full-time on the main tour including securing 2018 membership by just $287.

And Power was full of praise for West Waterford Golf Club and where it all began, with the club now fighting for existence having celebrated its 28th anniversary last week under the shadow of a looming sale via a July 29th online auction.

The 148-acre site is being touted by the auctioneers for a return to farmland, but the members believe this is an economically non-viable proposition, roundly dismissing estimates of the value of the wonderful native woodland — described as “standing timber” — as well wide of the mark.

“Without West Waterford Golf Club, I definitely wouldn’t be here,” said Power. “I started down there when I was 12, 13 years old. And all of the Spratt family, it was pretty much like my second family, they’re incredible. They helped me through all sorts of stuff, it’s just incredible.

“I’ll be so happy to see them. I can’t wait to see them and talk to them, all the Spratts, all the members at West Waterford. I’ll see my own family, and I have a nephew and a niece now.

“Family, friends, West Waterford, all the Munster GUI coaching, the national GUI coach, I mean, you don’t get here without everyone along the way making a difference and helping you. I can’t wait to kind of see them all and thank them all. Hopefully, they were able to stay up and enjoy seeing me win.”

For more Reaction to Seamus Powers win, Listen to this week’s Podcast