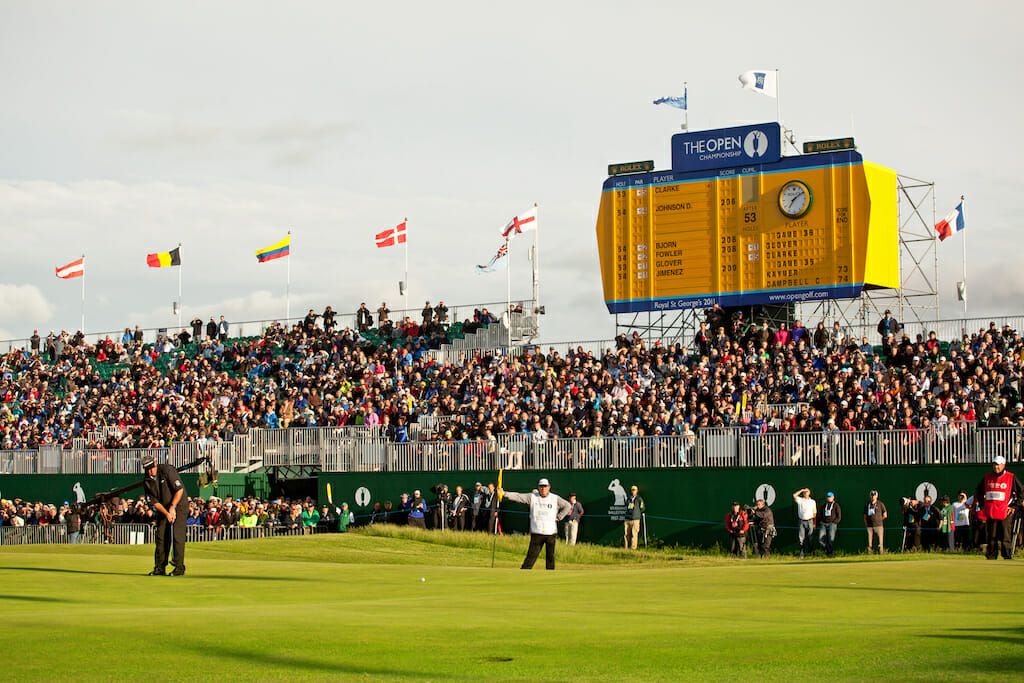 For its part in the Open rotation, this year’s venue, Royal St George’s has hosted 14 renewals across 127 years of golf. It’s fair to say that it’s a course steeped in history, so before the 2021 champion writes his name in its folklore, we look back at three most memorable moments from one of the toughest tracks on the rotation.

One of the most natural talents to ever grace a fairway, many believed Darren Clarke’s chances of collecting one of golf’s big four titles had come and gone by the time the 2011 Open made its way to Royal St George’s.

Clarke was 42 the time the 140th Open came around but it would be at his 20th time of asking that he’d capture a fairy-tale Claret Jug.

In desperate form coming into the event, even his Ryder Cup playing partner and great friend, Lee Westwood suggested Clarke was more likely to “finish last than to finish first” in Sandwich that year, but golf has a funny way of making forecasters look silly and with mind-guru Dr. Bob Rotella in his corner, Clarke stumbled on a state of zen that would see him through to a first Major title before ever a ball was hit on the famous links.

Evidently inspired, Clarke held off the challenge of Phil Mickelson and Dustin Johnson down the stretch that Sunday, fulfilling potential that had been no secret to the golfing public long before that.

“At The Open, I played like I can play,” Clarke said of his three shot win.

After Phil Mickelson became the oldest winner of a Major at the PGA at 50, who’s to say a 52-year old Clarke, twice a winner on the Champions Tour, can’t relive that winning feeling again back on a happy hunting ground?

When the Great White Shark got the bit between his teeth at the 1993 Open at Royal St George’s, there was no stopping Greg Norman. A final round 64, one Norman describes as “the best I’ve ever played”, gave the popular Australian a second Major title seven years after his first as he lay siege to home favourite Nick Faldo’s hopes of a fourth Claret Jug.

Norman’s 13-under total battered Faldo into submission by two shots while it also smashed the previous winning record at Royal St George’s by a whopping eight strokes.

“What Greg Norman did there was incredible – the scores he shot there,” said eight-time Major winner Tom Watson. “I’ve always felt that St George’s is really a tough golf course, a great second shot golf course, but what Norman did there, in particular, was a remarkable achievement.”

Sandy Lyle’s victory in 1985, where Christy O’Connor Jnr led after an opening 64, brought to an end a 65-year wait for a Scotsman to claim an Open Championship title.

George Duncan had last snatched the title in 1920 but two-time European Order of Merit winner Lyle wasn’t about to let that burden stop him capturing the Claret Jug for his country.

On a scorched Sandwich layout, Lyle came through the pack on the final day, holing a raking birdie putt on the par-5 14th that swung the momentum in the Scotsman’s favour. He would birdie 15 before taking an agonising one-shot advantage up the last where Lyle’s approach found ‘Duncan’s Hollow’ to the left of the green.

He would take two to find the putting surface from the dip – dropping to his knees in despair as his first attempt came to rest back at his feet. But the subsequent up-and-down, after a near heart-stopping wait, would prove fruitful as Lyle lay claim to his first Major crown.