McIlroy: Brooks/Bryson video was the “best thing ever” 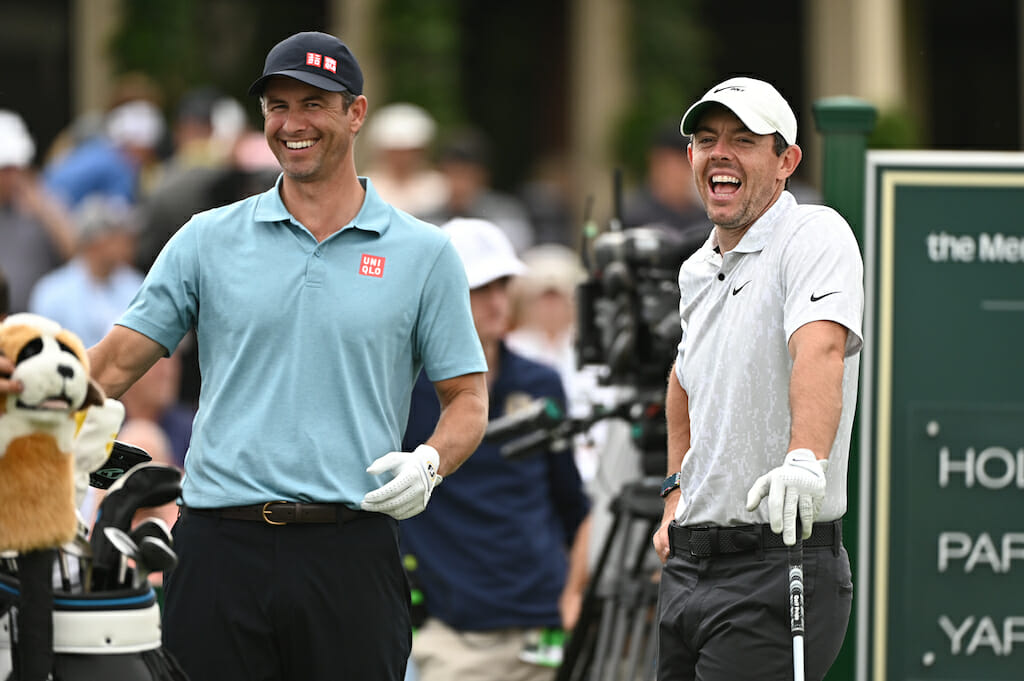 Rory McIlroy certainly looked to be getting along with Adam Scott in Dublin, Ohio (Photo by Ben Jared/PGA TOUR via Getty Images)

Rory McIlroy admits he’s all in on the Brooks Koepka – Bryson DeChambeau rivalry, saying it’s a part of life that some people don’t like each other and that’s true of the PGA Tour as well.

McIlroy was speaking after signing for a second successive even par 72 to be sitting in a share of 43rd as play was suspended for a second straight day at The Memorial tournament.

“I sent Brooks a message last Monday morning when it all came out. I said, ‘I don’t care what happens to me for the rest of this week, this has made my week, this is like the best thing ever’,” McIlroy said of the leaked video post-PGA at Kiawah Island where Koepka’s disdain for Bryson was there for all to see.

“Like it’s fine, I think it’s good for guys to show personality and I’m pretty sure whoever leaked it from the Golf Channel got in trouble, I don’t know if anyone’s got to the bottom of that, but, hey, look, it is what it is. There’s certainly people out here that don’t like me, I’m sure, and there’s a few people out here that I don’t like and that’s, you know, but that’s…”

‘Never gets aired,” asks the journalist?

Another fact of life, particularly when you’re Rory McIlroy, is that winning breeds expectation and since his victory at Quail Hollow, the 32-year old has felt a heightened external anticipation that his game has been unable to meet.

“I think everyone from outside thinks, ‘Okay, he’s got it again, he’s back, he’s going to go on a run’,” McIlroy explained. “But you never know. Like you never – we all play this game and you, you never know. You maybe have a feeling — like I felt like I was going into Quail Hollow with a pretty decent game and it’s a golf course that I love and I play well at, so I knew that if I played my game I would have a decent chance.

“And I didn’t play that badly, I think I played the par-5s at Kiawah in 3-over and Phil played them in 11-under or 10-under and he beat me by 12 for the week. So if I play the par-5s like Phil at Kiawah, I have a chance to win.

“And then I was saying as well, like if you look at my scores over the last few tournaments, they probably wouldn’t look spectacular, but I feel like what I’ve done over the last three months say is I’ve basically just played the toughest venues on toured, played Augusta, Quail Hollow, Kiawah and here. So like I, it would be nice to shoot a few more rounds in the 60s, but when you’re playing courses that are this tough, you sort of, it sort of makes it maybe look not quite as good as what it is.”

McIlroy’s even par halfway tally is eight shots behind clubhouse leader Patrick Cantlay who heads the field at eight-under par alongside Spain’s Jon Rahm who has five holes to complete of his second round at Muirfield Village.

Shane Lowry had two bad holes to blame for dropping ten places down the leaderboard to a share of 21st on Friday. Starting from the tenth, the Open champ double-bogeyed the 12th and 17th, holing a 33-foot putt for his double on 12 after finding water from his green-side bunker shot at the 170-yard par-3. Lowry also posted three birdies and was two-under par for the tournament with six holes to play when sirens sounded on Friday.