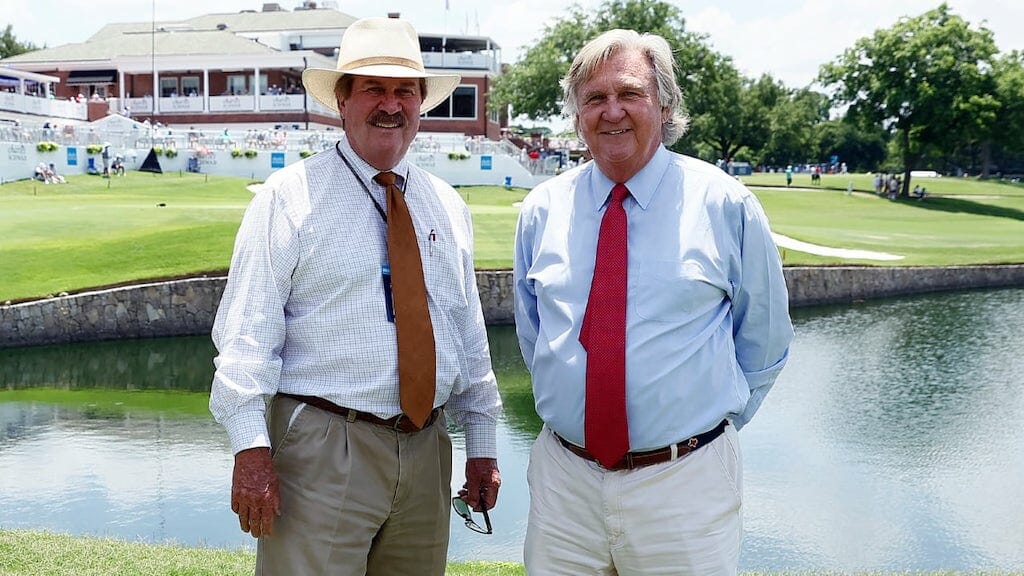 In the past seven months we’ve seen a huge change on the leading two tours of the world. Last October, golf celebrated the end of an era on the European Tour with the retirement of John ‘JP’ Paramor and his fellow Chief Referee, Andy McFee.

JP joined the European Tour in 1976 and Andy in 1983 but in retiring, no-one knows how many tournaments either has been present at in a referee capacity. Whatever the number, the duo have been cornerstones for the European Tour having worked with the best of the best of European-born golfers including Seve, Lyle, Woosnam, Faldo and also the current crop of European-born players now making their mark on the game.

JP and Andy appropriately chose last October’s BMW PGA Championship at Wentworth to end their days working on the European Tour. Now the pair have been joined in retirement by their counterparts on the PGA Tour in Slugger White and Mark Russell, with the duo choosing last week’s Charles Schwab Challenge at Fort Worth in Texas to call it a day.

Slugger and Mark have been working the PGA Tour for well over 40-years and, from my own relationship with the pair, they’re two of the nicest fellows you could meet. Though I have to admit, I sometimes mixed-up who was who but I was not alone, while I wouldn’t know ‘Slugger’s’ first name and for that matter, I don’t think anyone else does.

In researching this article, however, I now have learnt Slugger’s given name was Carlton White and he was nicknamed ‘Slugger’ by his father as he was a large baby and his father nicknamed him after an Army buddy of his who, like his father, was a boxer. Slugger played on the PGA Tour from 1976 through ’79.

In an article by Golf Digest US, he said: “I made exactly $32,279 out here. It actually was enough to break even, and it helped that I was able to supplement it by playing the mini-tours. Those events, I actually could win. A $2,500 cheque for a win at a tournament played somewhere between Phoenix and Tucson felt huge. In Waterloo, Iowa, I won a car, which I immediately sold back to the dealer for $6,000. It was a scrambling kind of life, but I enjoyed it. There were moments when I felt on the verge of really making it.”

Just like JP and Andy, Slugger and Mark have seen the likes of Arnold Palmer and Jack Nicklaus come through the ranks of the PGA Tour along with Tiger Woods and so many other golfing superstars.

“We’ve always had a good time together and we’ve always been in a situation where both of us like to laugh and have senses of humour,” said Russell.

“No matter what was going on, we could always see the bright spot in things, and we’ve just always had a good time. We kind of think alike. We like to uphold traditions of the game and the PGA Tour and the players. Slugger is just a great friend, always has been. It’s a special relationship I think that not many people can say they have. I’ll cherish that.”

Russell started with the Tour in 1980. White joined him two years later, after his playing career was over. White played in 73 events from 1975-81. His best finish was fourth in the 1977 San Antonio Texas Open, where he started the final round one shot behind co-leaders Tom Kite and Hale Irwin.

“I was able to play with some of those guys. I played with Arnold a couple times. Practice round with Jack,” said White. “And then I came to this side of it, and it’s just grown so much. … I’m glad we put together a pretty dog-gone good team and they will carry forward, that’s for sure.”

White couldn’t recall ever receiving a penalty from Russell, but does remember the time he retreated to the bar at Pleasant Valley before turning in his scorecard from the Monday qualifier. Russell had to interrupt White’s post-round refreshment and remind him to take it to the scoring area.

White said he’ll use retirement to learn the piano – “He’s a tremendous singer, I can tell you that,” Russell said – do volunteer work and spend time with his granddaughter. Russell said his retirement plans are to be determined.

“It is kind of strange, realising this is going to be the last time we work together but we are turning it over to some really good people that we’ve hired through the years,” Russell said, “and they are going to uphold traditions of the great game and the etiquette of the great game. They will do a great job.”

Congratulations to Slugger and Mark and enjoy your retirement. All those working the Tour will miss your friendship.