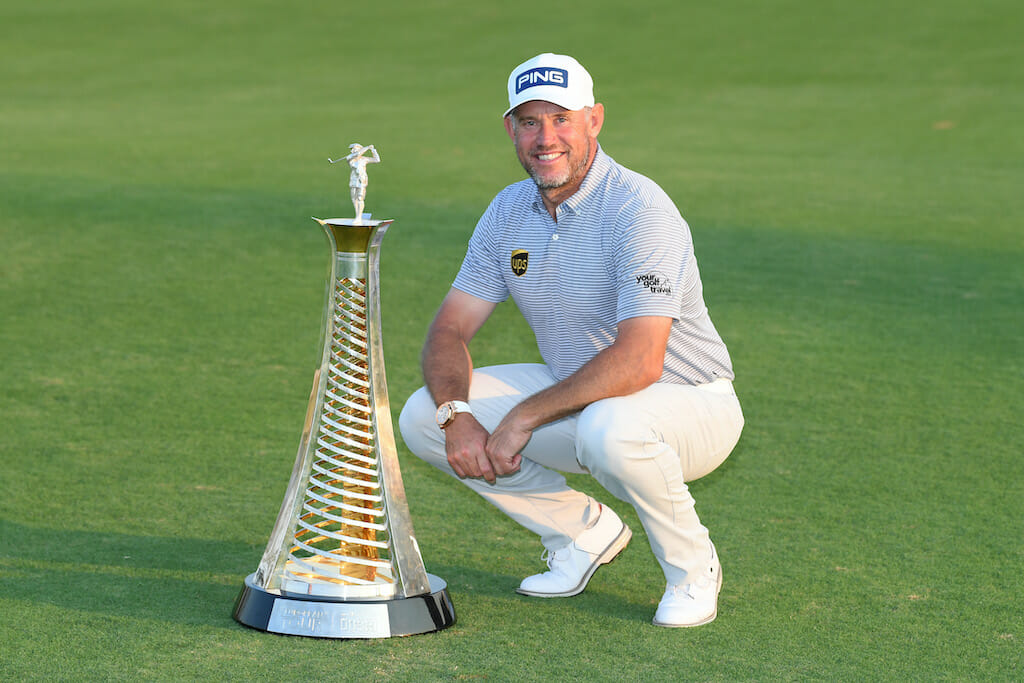 Lee Westwood has been named the winner of the Seve Ballesteros Award as the 2020 European Tour Players’ Player of the Year following a remarkable season which culminated in the 48-year-old topping the Race to Dubai Rankings presented by Rolex and being crowned European Tour Number One for the third time in his storied career.

The announcement coincides with the ten year anniversary of the passing of the Spanish legend Ballesteros, who died on May 7, 2011 following a battle with cancer. Westwood’s first of ten Ryder Cup appearances came in 1997 under Ballesteros, who captained Europe to a famous win at Valderrama. The Englishman had long ago secured his status alongside the late Ballesteros as one of the European Tour’s greatest ever players, but a memorable 2020 campaign has earned him another accolade after his fellow European Tour Members voted him the Players’ Player of the Year.

It was a season bookended by two of his most impressive performances. In his first appearance of the season, Westwood claimed his second Rolex Series title at the Abu Dhabi HSBC Championship, overcoming his fellow Englishmen Matt Fitzpatrick and Tommy Fleetwood as well as France’s Victor Perez. He capped off his season on a high too, his runner-up finish behind Fitzpatrick at the season-ending DP World Tour Championship, Dubai earning him the title of 2020 Race to Dubai Champion.

In a disrupted campaign due to the Covid-19 pandemic, Westwood’s consistency was something to behold – in 15 appearances he missed just one cut and produced eight top 20 finishes. On top of that, Westwood continued to give back to the game and to the European Tour through hosting the 2020 Betfred British Masters at Close House, which marked the first of six events in the UK Swing and was won by Italian Renato Paratore.

“It means a lot that it is voted for by my fellow players, the guys I play with week-in week-out,” said Westwood. “Awards like this are always very special because I feel like they as players know what you have to go through.

“I played a lot of good golf under pressure when I needed to in 2020. The win in Abu Dhabi at the start of the year and then to have a chance to play so well in the final event at the DP World in Dubai, I was really pleased with those two tournaments, but I was also consistent and that was important to me. It was a very difficult year with the pandemic for everyone, and we were very fortunate to play golf during this time.

“Seve was an icon of the game, and still is. When I started playing golf, I was looking at the Europeans and Seve’s name was at the top of that list as somebody to aspire to. The first tournaments I ever went to watch were Ryder Cups in 1989 and 1993, and Seve’s name is synonymous with the Ryder Cup.

“I remember looking at these guys like Seve and Nick Faldo, Colin Montgomerie, Bernhard Langer and Ian Woosnam wanting to be like them. Then in 1997 I am in a Ryder Cup team captained by Seve Ballesteros, so it was a very short gap between looking and watching and learning from my heroes to actually being amongst them trying to win points in a Ryder Cup. That for me was really one of those pinch yourself moments, like is this really happening to me. Seve was a huge part of that and inspirational in the team room, and just a phenomenal and very calming presence.”

Keith Pelley, Chief Executive Officer at the European Tour, said: “I don’t think it is any surprise that Lee Westwood has won the Seve Ballesteros Award after such a tremendous season. At 48 years of age he is an icon, a former World Number One, our most recent Race to Dubai winner and like Seve, Lee is a true champion. He has an unwavering will to succeed, and he has proven that over and over again in his career.

“Lee is one of the few remaining European Tour players to have competed alongside Seve and to have had the honour to call him a friend. They are two players who will be long remembered in the pantheon of European Tour and Ryder Cup greats.”

Javier Ballesteros, Seve’s oldest son, added: “I am personally very happy Lee Westwood is the winner of the Seve Ballesteros Award for his incredible season. Lee is playing some great golf, I think he is physically in great shape and when you enjoy not only golf but life away from the game, things go well for you, and that has shown in how he has played not only last year but over the past few years around the world.”

David Howell, European Tour Tournament Committee Chairman, said: “It’s obviously not the first time Lee has won the Race to Dubai, and last year was of course a strange year, but it seems fitting that whenever something slightly different comes along Lee Westwood is there to remind us that things are normal.

“Whilst Seve was a worldwide player, a Major winner and one of the biggest stars in the game, you always felt that his heart was with the European Tour. I think that came out with his Ryder Cup heroics and you just knew Seve cared deeply about the growth of the European Tour, and similarly with Lee, while he has been at the top of the tree for many years you just know his heart is with us and he has always supported the European Tour where possible. He has been one of the biggest names for over two decades now and it is great to see someone so loyal to our Tour coming up trumps again last year.”