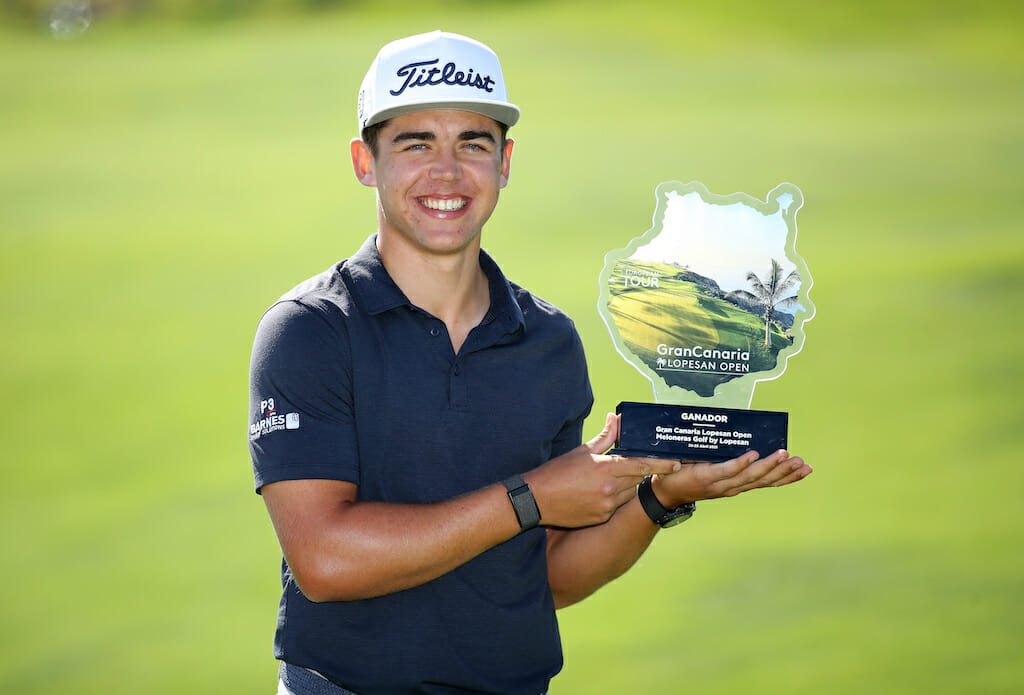 Garrick Higgo made history at the Gran Canaria Lopesan Open as he recorded the 500th win on the European Tour by former European Challenge Tour players.

The 21-year-old picked up his second European Tour title at Meloneras Golf thanks to a closing seven-under par round of 63 to reach 25-under par, three strokes clear of Maximillian Kieffer in second place.

Higgo, who earned his European Tour card by winning the dual-ranked Open de Portugal at Royal Óbidos in 2020, said: “It’s awesome. I think my success is a combination of the Sunshine Tour back home and then the Challenge Tour. The Sunshine Tour really gave me the platform to do well and then I got a couple of invites to play on the Challenge Tour. Golf in Europe is hard, so it definitely sharpens your game.

“I’ve definitely looked up to people like Louis Oosthuizen and what they’ve done. Everyone has their own path.

“Bob MacIntyre has done pretty well since we last played together. I played with him the week before he won in Cyprus, so hopefully I can follow in his footsteps a little bit. Rasmus Højgaard has done really well, as have a lot of guys. Everyone pushes each other on. I’m sure I’m going to push other guys on to win as well.”

“There is no better training ground for players to come through and achieving 500 European Tour victories is testament to more than 30 years of hard work by our staff, promoters, sponsors, stakeholders and, of course, our players.

“I must pay tribute to former Challenge Tour Director Alain de Soultrait for his leadership and dedication to producing the next generation of talent for over 25 years. Without Alain, the Challenge Tour would not be what it is today

“I am excited to continue working alongside our partners and stakeholders to provide more opportunities for future stars to grow and fulfil their undoubted potential.”

The Challenge Tour was founded in 1989 and the first win on the European Tour by a former Challenge Tour player arrived when Per-Ulrik Johansson triumphed at the 1991 Renault Belgian Open.

In total, 187 different former Challenge Tour players have won on the European Tour, including seven who have 11 Major Championships between them.

There had been 47 wins on the top tier at the turn of the 21st century, before the frequency of victories increased, and when New Zealand’s Michael Campbell became the first former Challenge Tour player to win a Major at the 2005 U.S. Open, the total number of wins had reached 137.

Victories kept coming thick and fast, as future Ryder Cup Captain Thomas Bjørn made it 150 wins on the top tier with his 2006 Irish Open victory, before further milestones were reached the following year.

England’s Justin Rose, who played on the Challenge Tour between 1998 and 2000, won twice in 2007 on his way to becoming the first former Challenge Tour player to be crowned European Tour Number One.

Trevor Immelman, who graduated as part of the Class of 2000 alongside fellow Major winner Henrik Stenson, became the Challenge Tour’s first Masters Champion when he claimed victory number 196 at Augusta National in 2008, before Richard Finch’s Irish Open victory later that year made it 200 top flight wins.

Swede Stenson, who won the Challenge Tour Rankings in 2000, picked up the first of two European Tour Number One titles in 2013 before adding a second in 2016, the same year in which he claimed his maiden Major Championship title by winning The Open at Royal Troon – the 387th European Tour win by former Challenge Tour players.

Englishman Tommy Fleetwood, the 2013 Challenge Tour Rankings winner, earned win number 400 with his victory at the Abu Dhabi HSBC Championship in 2017, before Alex Noren wrote his name into the record books later that year. The Swede’s thrilling victory at Wentworth Club in the BMW PGA Championship made him the Challenge Tour’s first Rolex Series winner.

The Challenge Tour is a proven pathway to the European Tour and uses its vast international schedule and relationships with golf federations and PGAs to give players from around the world the opportunity to compete against some of the most talented up and coming stars in world golf.