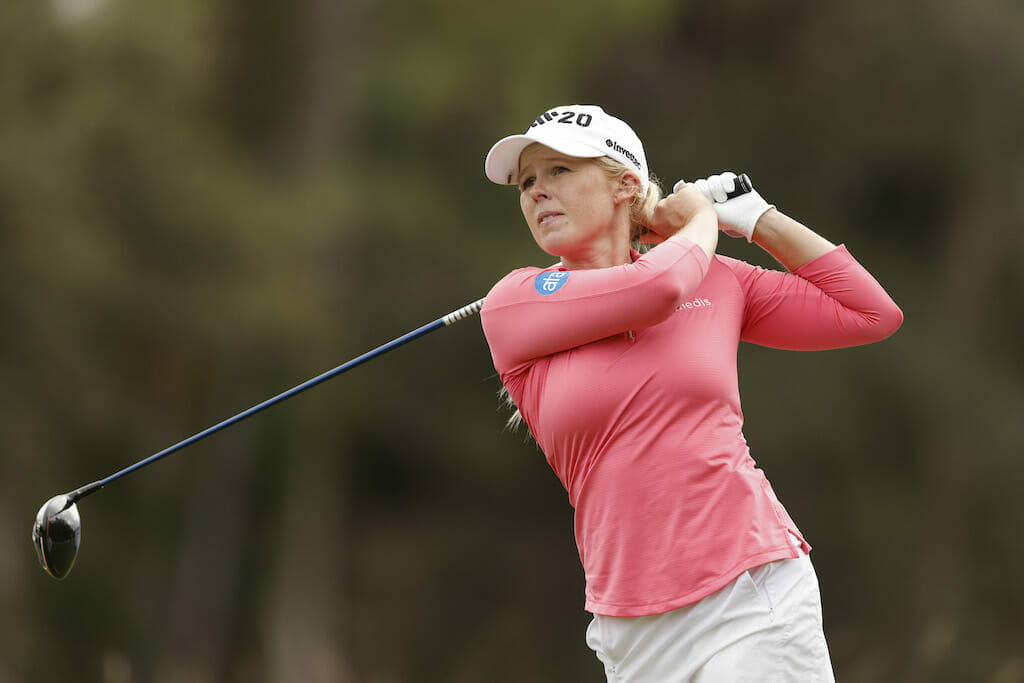 Stephanie Meadow saved her best golf ‘til last to sign off in style with a five-under par 67 for a top-20 finish as Thailand’s Patty Tavatanakit claimed her maiden Major win at the ANA Inspiration.

Jordanstown professional Meadow was electric on Sunday, firing five birdies in a blemish-free showing that saw her bolt up the board to a tie for 19th at six-under. Averaging 288 yards off the tee on the final day, Meadow found 14 of 18 greens in regulation and needed just 27 putts en route to collecting a cheque worth $34,340 in a real early season boost for the Northern Irishwoman.

It saw Meadow finish two clear of her Olympic teammate Leona Maguire who also signed off her week well with a two-under par round of 70. Leading during day two of the tournament, the Cavan professional will be left to wonder what might’ve been but her four-under total for a share of 28th was another step in the right direction and a valuable one for many reasons, not least the $23,352 cheque.

Yet nobody was beating Tavatanakit at Rancho Mirage last week, despite an incredible challenge coming from New Zealand’s Lydio Ko on the final day. Tavatanakit calmly closed out with a blemish-free final round of 68 having held the lead since Thursday.

The 21-year old rookie started the day five shots clear of a formidable chasing pack which included the world No.1 and four past ANA Inspiration champions. It was the 2016 Champion Ko, who came closest to thwarting Tavatanakit’s maiden LPGA victory as she surged up the leaderboard with a stunning final round of 62, finishing just two shots back in second place.

Tavatanakit’s jump into Poppie’s Pond alongside her caddie Ryan Hogue was almost as impressive and stylish as her on-course performance.

“It’s amazing I’m still calm, there is some calmness in me,” she said. “I don’t know why. But like I said, I just wanted it to be done since this morning, I didn’t get a lot of sleep last night. But I meditated twice this morning. Just be patient and I knew it was going to be hard out here and I got to be really strong mentally.

“So it feels great to be a major champion. It still hasn’t really sunk in yet the fact that I just turned 21 six months ago and now I’m a major champion in my rookie year. Just crazy.”

Through the week and again on the green during the trophy and robe presentation, she referenced the importance of playing in the ANA Inspiration as an amateur and how she called upon the experience of winning the low-amateur medal in 2019 throughout the week.

“It’s an amazing, amazing feeling,” she added. “I feel like I’m really grateful for all the opportunities I got from before AJGA for having me play here as an amateur, and also got an invite when I was in college. Really grateful for those opportunities to come and play, experience the course and know how it’s like to play in a major. I feel like that helped me a lot.

“I was talking to my coach last year at the U.S. Open. I was like, Wait this is my fifth U.S. Open. Then I was just, Oh, man, I’ve played in couple majors, like enough to know how to handle myself out there, and it was probably the best experiences I’ve ever gotten.”

Ko was as delightfully philosophical as always when she spoke of her spectacular 62 which tied the lowest tournament round record of Lorena Ochoa in 2006.

“I was a little bit of a mess the first couple days,” said Ko. “I made a lot of birdies — I made more birdies than bogeys thank goodness, but I was making a lot of like clumsy mistakes, and it kind of fed on from what was happening last week.

“I was just excited that I could be back in this kind of position and be under this adrenaline. Always no matter if it’s a major or just any other event we play, I think it’s great to finish your tournament on a high. I was like, oh, you know, I wonder if I hadn’t made a few of the clumsy mistakes early in the week what could have happened.

“There can be times when you go, oh, what could have been, but I feel like I have to focus on what were the things that I did well to just be in this position.  Even though I haven’t won, I think if somebody said, ‘hey, you’re going to shoot 62 today’, I’d be like, ‘oh, yeah, definitely give me the ticket to 62 and I’ll just sit in the shade all day’.

“So yeah, I think I’m obviously pleased with it. Like I said earlier, Patty played amazing golf, and I tried to chase her, but she was just a bit too far away.”