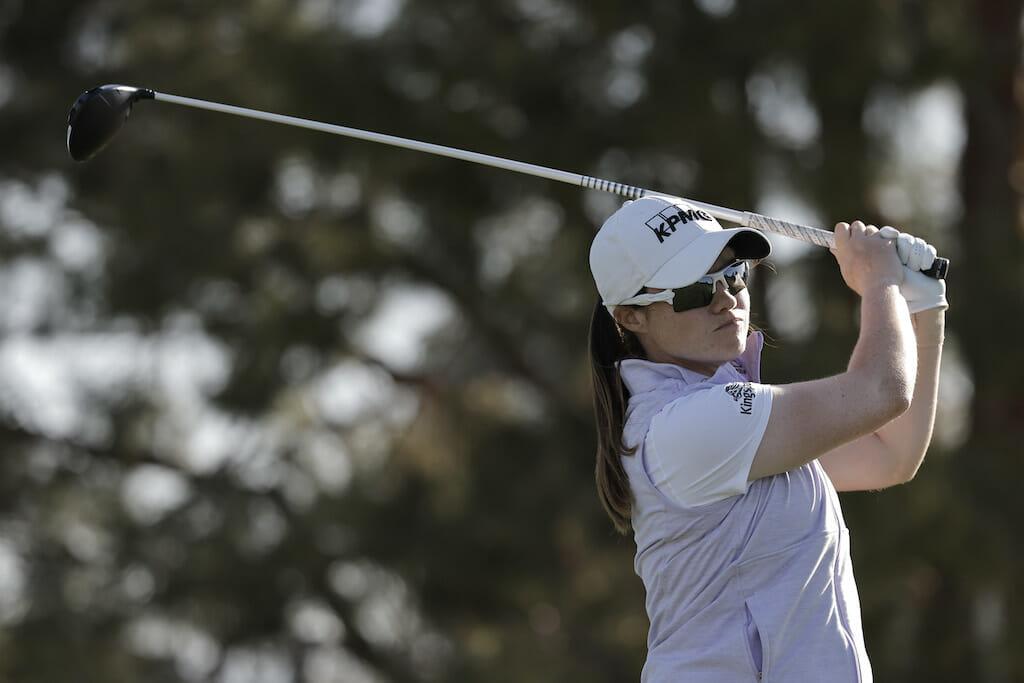 Leona Maguire remains in contention at the halfway stage of the ANA Inspiration after a typically gutsy display in round two at Rancho Mirage.

The sight of the Irish flag flying high atop the leaderboard of the year’s first Major was a sight to behold as the Cavan professional birdied her third hole to move to six-under par and lead early on Friday. In the end it would be a one-over par 73 for a four-under total, five back of Thailand’s Patty Tavatanakit at the halfway point, however that only tells part of the tale.

In truth, Maguire didn’t have the game that saw her sign for a 67 on Thursday. She only hit 10 of 18 greens in regulation and had to go to the well to ensure her outward nine was bogey-free with a number of great up and down par saves. However, it was the sixth hole – her 15th of the round – that typified Maguire most. Her shouts of ‘go’ fell on deaf ears as her approach to the green found the water.

Taking her penalty drop, Maguire then missed the green with her fourth, leaving her a tough up and down for double-bogey with her titles chances hanging by a thread. However, in such adversity, special players find more and Maguire’s chip-in from a tough spot short-right of the green was crucial, her fist-pump expressing just how much it meant, and at four-under par, she remains in the hunt at the year’s first major and can be buoyed by weekend rounds of 68 and 69 at this same Major last year.

Stephanie Meadow continued to also hold her own on Friday, adding a one-over 73 to her opening 71 to sit in a share of 44th at even. That’s nine shots back of Tavatanakit’s lead after the Thai star, who turned pro shortly after finishing 26th in the 2019 ANA Inspiration, adding a 69 to her opening 66 to get to nine-under as she goes in search of her maiden Major win.

“Just keep doing what I’m doing, focusing on what’s important, what I can control out there,” said Tavatanakit. “There is a lot of — there is going to be a lot of challenges on the weekend and I’m ready to face it. It’s not going to be easy. If I were going to win it it’s going to be tough.”

“I’m feeling good. You know, not going to lie, I was kind of tired. Making the turn I kept drinking water and I felt like I drank too much water so I was like, oh, my God I’m bloated.

“Then I just got — you know, keep sipping because it’s hot out here, you get dehydrated pretty fast. I think that was the key focus for overall for today, you know, stay hydrated and stay sharp, make good decisions, and the result turned out great.”