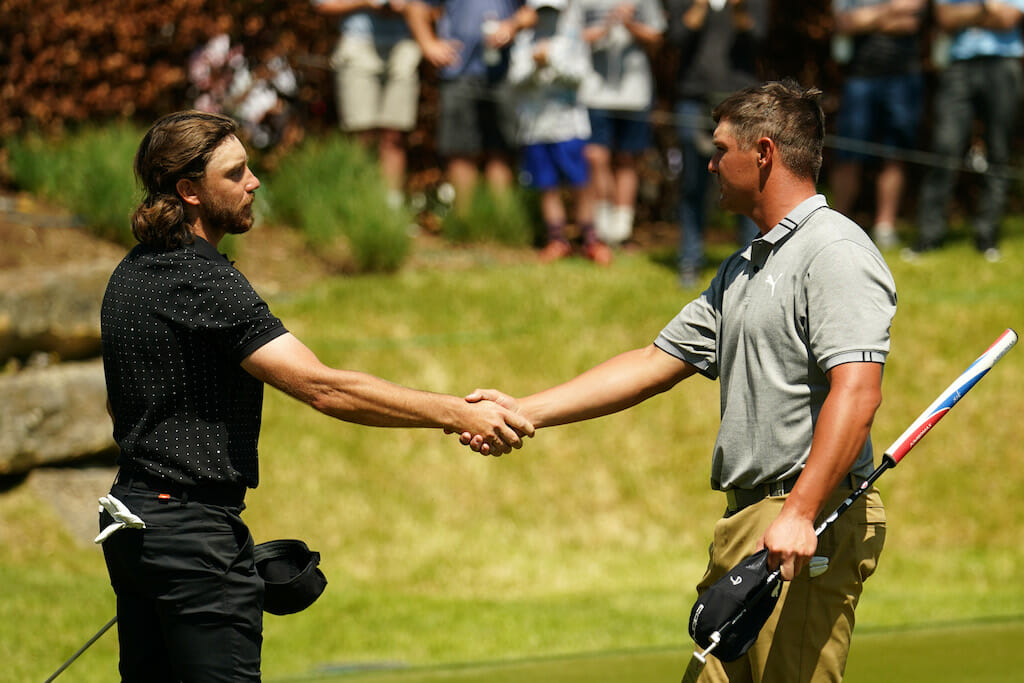 Fleetwood’s caddy Ian Finnis had earlier broken a wooden crosswalk sign in half trying to remove it so that Fleetwood wouldn’t hit it while playing his shot. Finnis looked totally surprised seeing what he’d done and then threw down the top half of the sign, shrugged his shoulders, and as he walked back to take his place beside Fleetwood, everyone began laughing except Fleetwood.

“I wasn’t laughing as I just know how clumsy he is, so I was expecting it, to be honest,” said Fleetwood. “He’s not got the lightest touch. Like as soon as he touched it I think it snapped and it was done then. We can sort of reimburse the tournament for a new walking sign.”

The Ryder Cup winning hero then had the crowd on their feet applauding at the last. Needing only a half to win the match, Fleetwood’s shot on 18 landed heading some 70- yards left of the flag to be well off the fairway and way down below on the bank of a small stream – leaving Fleetwood an impossible shot and the likelihood of DeChambeau halving their match.

After much deliberation and working out his stance, Fleetwood brilliantly got a club to his ball to the back of the green, chipped from near 90-feet to then some three-feet and left DeChambeau gobsmacked in holing the par. The reigning US Open champ stepped-up and horribly missed his birdie putt from eight-feet to hand Fleetwood the half he needed and not only win the match but win the group to go through to the last 16.

“Well, I could hit the ball down there on 18, which was lucky, it was just the direction that might have been the problem,” said Fleetwood.

“But I knew I could hit the ball so I could find a way into that, and then I was just working out sort of angles or which way I can get it to go or anything. It came out way better than I thought it would. It helps when you can ground your club in a hazard now, just having an idea of sort of what the ground is like. But still, I had no idea it would be like that.

“And then I had a chance of a flop shot. I had a decent lie. Actually that was a very impressive shot, give myself a chance for a putt, Bryson missed, and knocked it in and yeah, bit of a strange way to get a par on 18, but enough is enough.”

Unfortunately Shane Lowry won’t be joining Fleetwood in the last 16 but he can leave Austin with some confidence after taking down Sebastien Munoz in his final group match. Lowry, who tasted defeat at the hands of Ryan Palmer and Jon Rahm earlier in the week, went four up through six holes with four birdies on his card before closing out the match 3&2.