Lowry soaring after chipping-in for final hole eagle at Honda 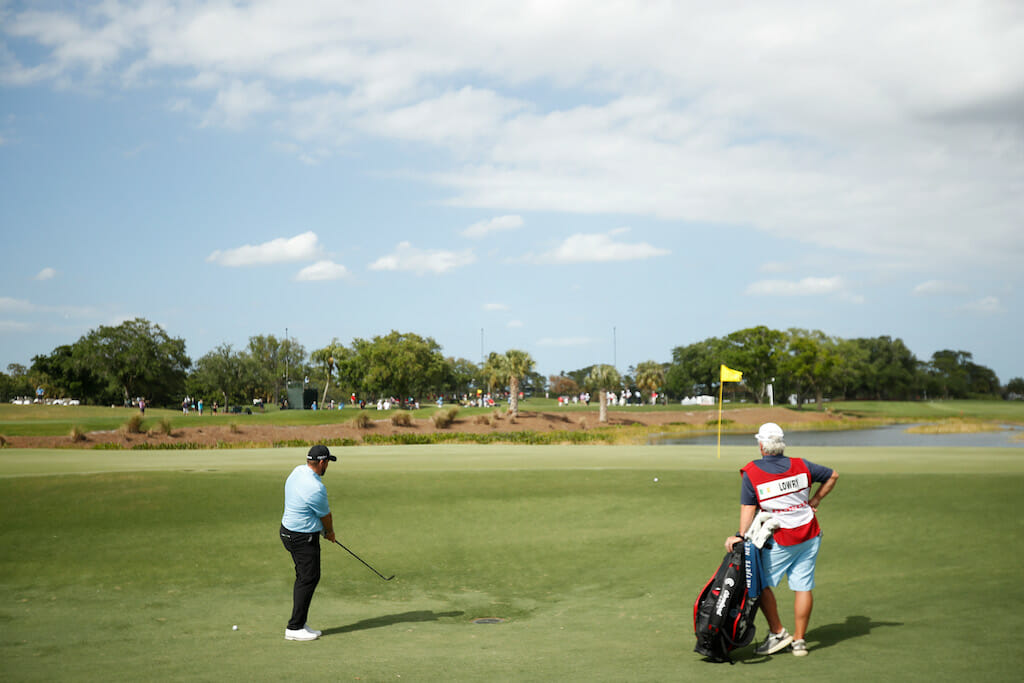 Shane Lowry had a smile from ear-to-ear after brilliantly chipping-in for eagle at the last to put himself in sight of the leaders heading to the weekend rounds of the Honda Classic.

Lowry holed a 40-footer from just short of the green in a four-under par 66 to move to seven-under par on the PGA National course at Palm Beach Gardens in Florida. The Open Champion had been struggling with the driver but got it all sorted over the inward half, finding the ‘short stuff’ on five of seven fairways.

Then at the last, Lowry launched a 323-yard drive and then sent a 203-yard second shot to just left of the green ahead of holing out. It left Lowry trailing five shots behind American Aaron Wise who opened-up a three-shot lead with a pair of 64s, with Lowry only two behind second place at nine-under.

“I hit a good drive down the last but noticed I had a bit of a ‘mud ball’, so I was aiming towards the left front bunker and I said to ‘Bo’ (caddy) ‘Let’s chip this one in’ as it was a straightforward enough chip shot,” said Lowry.

“So, I was nice and aggressive with it and I got it rolling and thankfully it went in, and it puts me now into a good position going into the weekend. Overall, I am coming off a good week last week so I’ve got a bit of confidence and coming here to a golf course I like playing. I knew it would be tough and that is why I like playing here, knowing that it will be tough.”

“A little bit of confidence goes a long way with me,” Lowry added. “I didn’t drive the ball well yesterday but every other part of my game was good while I drove it a little bit better over the later half of my round today.”

Lowry also upstaged playing partners and fellow Champions, Zach Johnson and Phil Mickelson. The pair of Masters winners both shot scores of 68 for Johnson to move to five-under and Mickelson to move inside the cut at one-under par

Lowry nabbed a first birdie at the par-5 third hole in smashing a 335-yard drive and while missing the green to the rear, he chipped-up to 14-feet and holed the putt He bogeyed seven but pulled off the shot of his round at the par-4 10th hole when he chipped-in from 32-feet short of the green for birdie

Lowry then holed a two-footer for birdie at the par-4 12th hole and then moved back inside the top-10 in landing a super 185-yard second shot at the par-4 16th to 14-feet for his fourth birdie of the day. There was clear frustration in finding a greenside bunker at the par-3 17th, the final hole of the three-hole ‘Bear Trap’, in taking a bogey ‘4’. Though that was all forgotten at his final hole.

And then in his post-round press interview, Lowry was clearly in a great place when quizzed if he had any stories he could share with ‘moments’ since July 2019 in the company of the Claret Jug given he had played in Johnson’s and Mickelson’s company.

“What time is it back home?” he asked laughing. “I’m not sure if I’m able to share some of those stories. But, look, obviously I’m very fortunate, I feel very fortunate to have won the Open Championship and to have the Claret Jug for a couple of years is obviously pretty nice.

“I would prefer if there was no COVID and things were normal and we got to play it last year, but obviously it’s nice to have the Claret Jug. And we didn’t talk about it at all, but Phil always asked me about it, and it’s just nice to be a part of such a kind of an elite group of players that have their name on that trophy. Like I said, I feel very fortunate to have done it and I’m sure the places I’ve brought it are quite different than the places someone like Zach has brought it, so, yeah!”

Lowry will also be the lone Irishman over the final two rounds of the €5.87m event with both Padraig Harrington and Graeme McDowell crashing out.

Harrington went into day two over par but was seriously mauled in playing the ‘Bear Trap’, named after course designer Jack Nicklaus. Europe’s Ryder Cup captain put two balls into the water in taking a horror ‘7’ at the par-3 15th and found the water on 16 in taking a double-bogey ‘6’ on route to a 78 for a 10-over par total.

McDowell was struggling after his opening 79 and improved by 10 shots with a 69 to miss the cut at eight-over. Lee Westwood looked visibly tired and running on the smell of an oily rag after his run of two second-place results in posting three doubles in his score of 78 to join the two Irish in also missing the cut at eight-over par.