Nostalgia comes with a hefty price in memorabilia market 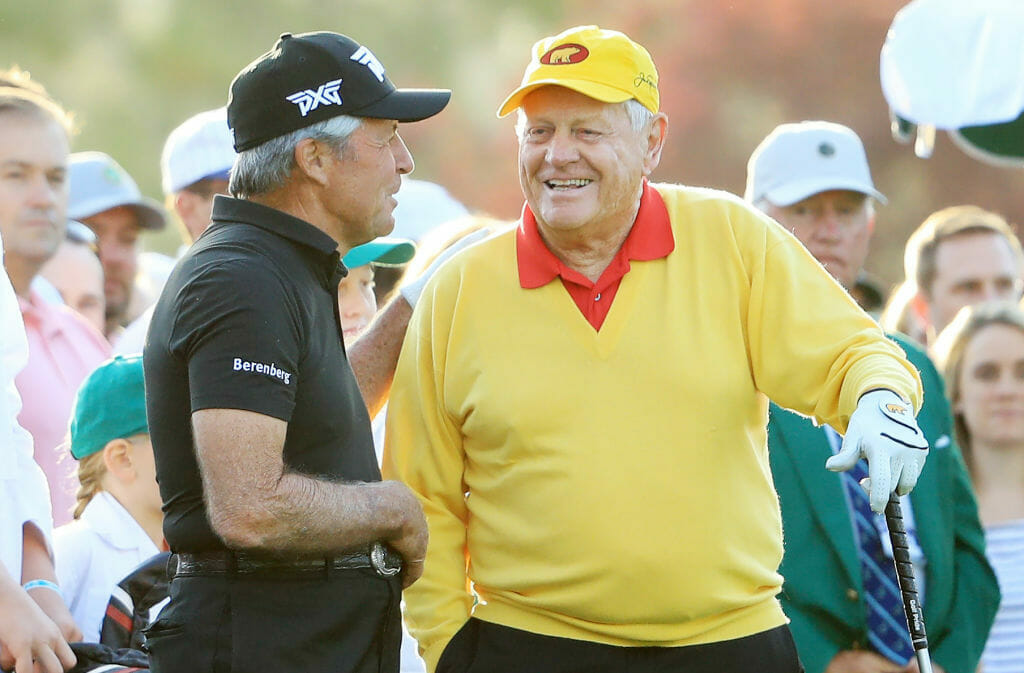 Gary Player and Jack Nicklaus at the First Tee ceremony at the Masters. (Photo by Kevin C. Cox/Getty Images)

Memories of major championship triumphs are priceless for those blessed individuals who win a Masters, US Open, Open Championship or US PGA Championship.

In all of golfing history, dating back to the first Open in 1860, just 225 men have won major titles. Of those, a mere 83 have won a minimum of two majors and only three players – Jack Nicklaus (18), Tiger Woods (15), and Walter Hagen (11) – reached double figures. Ben Hogan, Gary Player and Tom Watson are next best with nine victories each in the elite championships.

Great players, all of them. The stories of how, when, and where they achieved their stunning feats are embedded in golfing lore and will be told as long a golf is played on this planet. Ordinary mortals can only dream of holing a putt “to win The Open”, or the other majors, but if they have the enthusiasm and enough money, and know where to look, they could find themselves in possession of some remarkable items belonging to the big names of golf.

Take, for example, a recent auction held by Golden Age Golf Auctions in the USA. The big-ticket items were spectacular: eight of Gary Player’s trophies, including those awarded to him for winning The Masters, The Open Championship, US Open and US PGA. Player is just one of five golfers – Gene Sarazen, Ben Hogan, Jack Nicklaus and Tiger Woods are the other four – who have achieved a career Grand Slam. Given his elite status, any golfing memento owned by Player has considerable value when it becomes available for sale. The Golden Age Auctions prospectus highlighted the unique quality of the Player collection.

So how did it all work out? Bidding was more than brisk, it was phenomenal.  Top money came for the Masters Tournament trophy, with 24 offers before the hammer came down at $253,386. The Claret Jug memento was sold for $143,030. The ’65 US Open trophy went for $97,691 and the ’72 US PGA replica achieved $80,736. In total, Player’s collection, which also included a pair of personally signed golf shoes he wore on his last Masters playing appearance in 2009, went for a total of $642,611, accounting for the lion’s share of the $1 million in sales at the auction.

But there was a sting in the tail. Gary Player did not put these treasured mementos up for auction. The trophies had been previously sold to a private collector to raise money for charitable causes, and this was the first time they had been on offer for public sale. Mr Player was not pleased about this at all. He tweeted that the sale took place without his permission and that he was taking action to have them returned to him. Could he do that? It’s difficult to see how the golfer could get the trophies back if they had previously been purchased by a private buyer with the money going to charity.

The auction organisers said that while the trophies would be sold in individual auction lots, they hoped the winning bidder (s) would allow “this truly historic collection to be placed somewhere where it will be on display for public viewing.

“And we are willing to assist with that endeavour. Outside the homes of Jack Nicklaus or Tiger Woods, it’s hard to imagine a more complete collection of Major Trophies ever being assembled together again.”

It remains to be seen if this collection will be available to public viewing.  Meanwhile, all that matters to the successful bidder (s) is that he, she, or they have possession of some remarkable souvenirs associated with great moments in golfing history by a legend of the game.

The success of the auction reflects the enduring fascination of the sporting public with sporting memorabilia. Those lucky enough to visit Pádraig Harrington’s house can view his two Open Championship and US PGA Championship replicas, and yes, knowing what they represent, it’s a genuine thrill to handle these trophies.

The notion of hero-worship begins at an early age and blossoms into adulthood. Pre-Covid pandemic, men, women and children jostled for position hoping for the autograph of star golfers before and after each round. Most would be happy to get a cap or tournament programme signed, and would happily keep it for themselves. Others have a passion for seeking out historic items for their own sake, and of course, “professional” memorabilia hunters are out there looking to make a fast buck out of their hoard.

Is that so bad? It can be galling for top stars to take the time to sign their name on something which will be sold for cash later on, but there’s no easy way for them to discern the genuine collector from those with a commercial mindset. That said, it might be worth checking out your attic or store room. Golf items stuck away for years can turn out to be highly prized and valuable to those who know the market.

An exhaustive study carried out by a team led by David Yoken, CEO of Collectable.com in 2018 assessed the total value of the US Sports memorabilia market, including golf, at $5.4 billion annually. His report stated that “This includes the total gross merchandise volume [GMV] from eBay, independent auction houses, online retail venues, and other sources.” No wonder they say nostalgia ain’t what it used to be. The past, relating to golfing collectables, is worth big bucks in the 21st century.