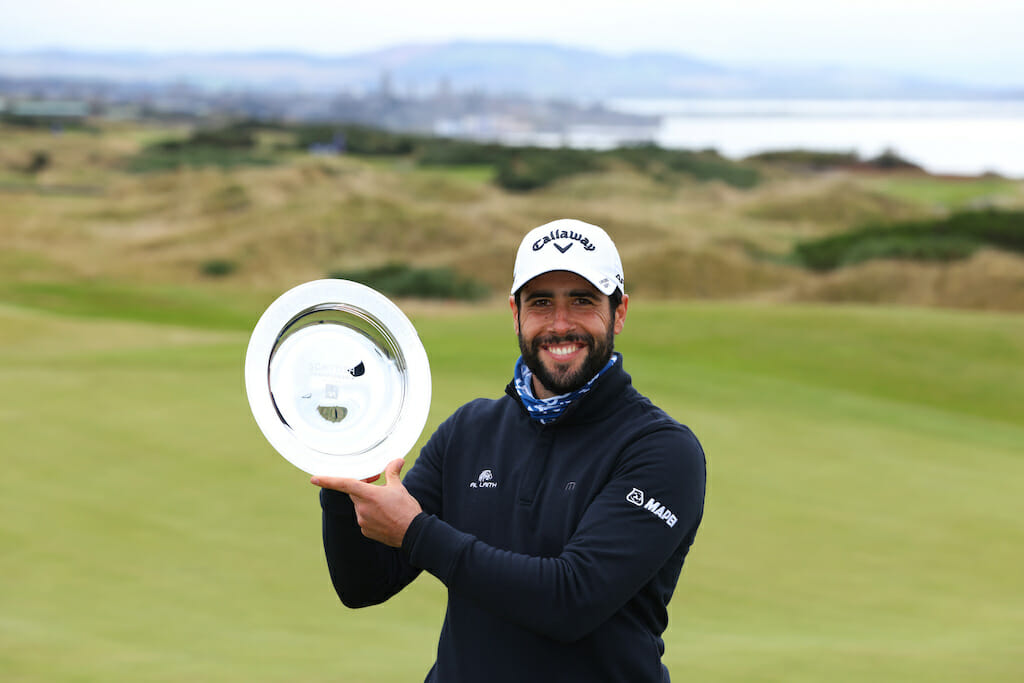 Adrian Otaegui has become only the third Spaniard to win on Scottish soil in storming to a four-shot success in the inaugural Scottish Championship at the Fairmont Resort to the east of St. Andrews.

Otaegui, 27, brilliantly muscled his way from four shots back to win with a nine-under par 63 and a 23-under par victory tally on the Torrance course at the Fairmont Resort.

The San Sebastian golfer looked in a class all his own having shot a first round 62, under a ‘four day preferred lie’ rule, and after a pair of 70s he went into day four trailing four shots off the lead to win by a similar margin.

“It feels really, really good to win. I’m very happy the way I played all week. I got off to a very solid start in the first round and then just played very consistent. I felt great,” said Otaegui.

“I was enjoying it very much. I was trying to keep my focus as well and trying to finish it in good style as well. I was four shots back before the first tee, so it was a difficult one to bring back.”

England’s Matt Wallace was a bitterly disappointed runner-up shooting a 71 for a 19-under par tally.

Wallace, 30, went into the final round enjoying a three-shot lead but all the dancing for joy in front of TV cameras when he birdied in the closing two holes on Saturday turned to despair on the final day.

The four-time Tour winning Wallace bogeyed his opening hole and while he birdied the fourth, a three-hole run from the eighth of bogey, birdie and bogey saw Wallace heading to the 11th tee one behind Otaegui.

From thereon it was all Otaegui.

Otaegui’s win is a first stroke-play success in his nine-year pro career after victories in the 2017 Saltire Energy Paul Lawrie Match-Play in Germany and also winning the 2018 Belgium Knockout.

Otaegui now joins good friend Rafael Cabrera-Bello, winner of the 2017 Scottish Open at Dundonald Links and the late, great Seve Ballesteros who won the 1984 Open on the nearby Old Course at St. Andrews, as a Spanish-born winner in Scotland

“Everything was on my side and I feel very lucky and very proud to have won here in Scotland, the Home of Golf,” he said.

“I am also now in very good company with Seve probably being one of the best golfers I have seen and Rafa who is a great friend of mine. I know Rafa won the Scottish Open three years ago so I am clearly in great company.

“I feel so happy to be able to win in Scotland and especially here in the town of St. Andrews, the Home of Golf, and it really means a lot to me.”