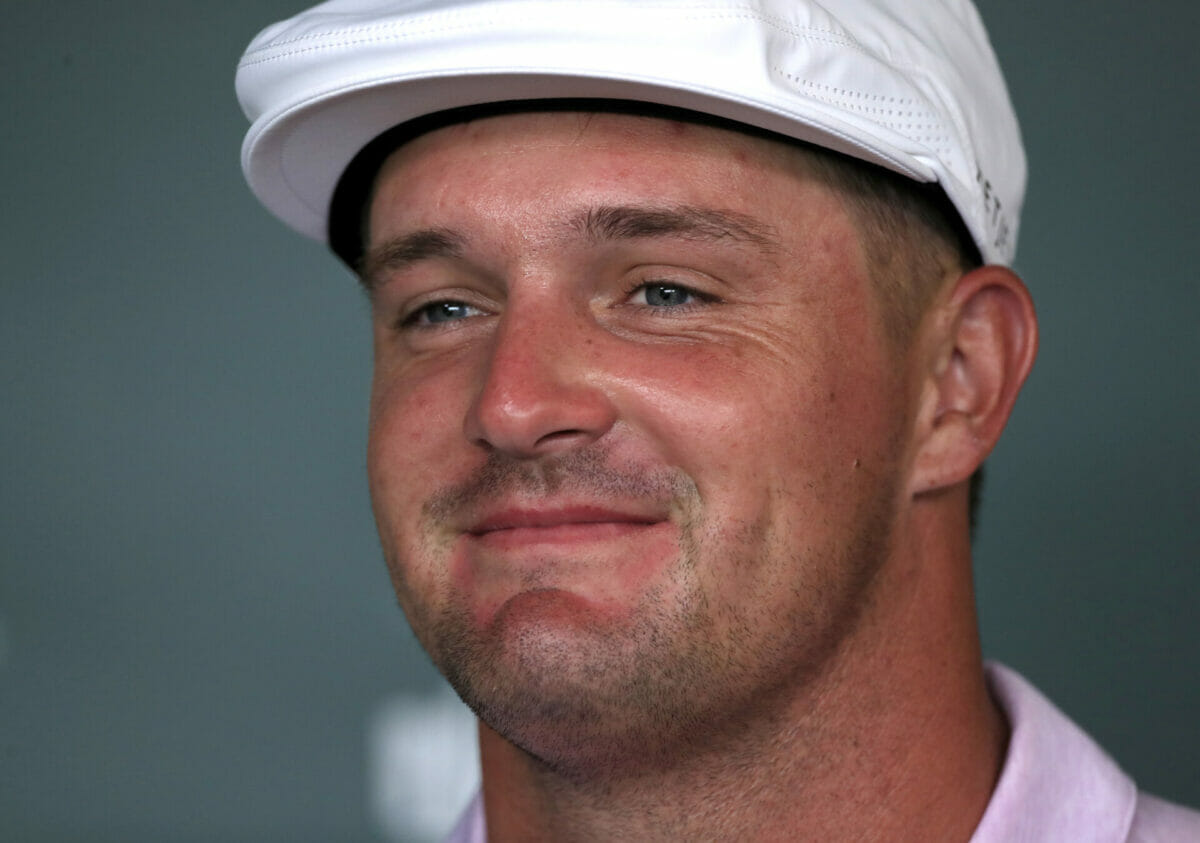 Reigning US Open champion Bryson DeChambeau has politely brushed aside Matthew Fitzpatrick’s fiery criticism of the American’s controversial new approach to the game that has the world of golf talking.

Fitzpatrick was probably still hot under the collar after doubling the last hole of his second round of the BMW PGA that would have handed him a two-shot lead in the Tour’s flagship event.

Instead the Englishman posted a round of 65 to be tied at the top with reigning Open Champion, Shane Lowry at 12-under par at the halfway stage at Wentworth.

The World No. 20 ranked Fitzpatrick was asked after his round what he thought of one of his fellow competitors, namely DeChambeau, stating post his Winged Foot success he was now striving to hit the golf ball 380-yards.

Fitzpatrick responded: “Seeing everyone is talking about it — I’m going to be biased because I’m not quite the longest, but Winged Foot, fair play to him, he won and shot 6-under, but Winged Foot, the fairways were tight as hell, and I drove it brilliantly, and I actually played pretty well, and I’m miles behind.

“He’s in the rough and miles up and he’s just hitting wedges everywhere. It just makes a bit of a mockery of it I think.

“I just looked at Shot Tracker yesterday, some of the places he hit it, and he’s cutting corners — when he’s on, there’s no point, is there. There’s no point. It doesn’t matter if I play my best, he’s going to be 50 yards in front of me off the tee, and you know, the only thing I can compete with him is putting, and that’s just ridiculous.

“I really hope the authorities do something.  It’s not a skill to hit the ball a long way in my opinion. I could put on 40 pounds, go and see a biomechanist and I could gain 40 yards. That’s a fact. I could put on another two inches on my driver. I could gain that, but the skill, in my opinion, is to hit the ball straight. That’s the skill. He’s just taking the skill out of it, my opinion. I’m sure lots would disagree. It’s just, damn.”

DeChambeau had equalled the TPC Summerlin course record of 62 on the opening day of the Shriners Hospital for Children Open in Las Vegas but was not quite as explosive on day two of the $7m event in posting a four-under par 67 to move to 13-under and trail one shot behind five players atop of the board on 14-under par, with the only non-American being Scotland’s Martin Laird who carved out an eight-under par 63.

DcChambeau was asked his reaction to Fitzpatrick’s comment with the journalist reading out to the American Fitzpatrick’s quote about ‘making a mockery of the game’ and in answering, challenged his English colleague to follow in his steps.

“I appreciate that comment. It’s a compliment to me honestly. A year ago I wasn’t hitting it anywhere near as far as I am today. It took a lot of work, a lot of hours to work through the night to figure out a lot of this stuff,” said DeChambeau.

“I would say it actually takes more skill to do what I’m doing, and albeit I may have — my fairway percentages are a little bit down, I still believe I’m hitting it straighter than what I was last year with the distances that I was hitting back then.

“So I actually appreciate those comments. I think he’s looking out for a certain set of players, and I appreciate that. My whole goal is to play the best golf I possibly can, and this game has given me the opportunity to showcase something pretty special.

“I feel like I’ve started to go down a path that’s allowed me to have an advantage over everyone, and I think that is a skill set when you look at it. For me out there today, I was still able to hit a lot of fairways at 360 yards. That’s tough to do with drivers.

“If anything, it’s more difficult to hit more fairways the way I’m doing it with the rules the way it is today. It’s more built for players like Matthew Fitzpatrick and his distances and players like that.

“So from my perspective, I think it takes a little bit more skill to do what I’m doing, and that’s why there are only a few people doing it out here.

“You know, I actually appreciate it, because I would love to have a conversation with him about it and say, Hey, man, I would love to help out. Why couldn’t you do it, too? You see Rory and DJ doing the same thing, too. They’re seeing that distinct advantage, and I feel like it’s great for the game of golf.

“Yeah, I do hit a couple errant shots like on 9 today, but I do hit a lot of fairways, I still hit great irons, and I make a lot of putts. I still think there is a lot of skill in that.”

It seems every week now since the US Open more and more players are being asked to comment on the impact DeChambeau is making on the game.

No doubt, those charged with administering the game continue to note all that is being said.

The next chapter of the nightmare for those administrators will unfold starting on 12th November when DeChambeau tees-up in a fourth Masters appearance.