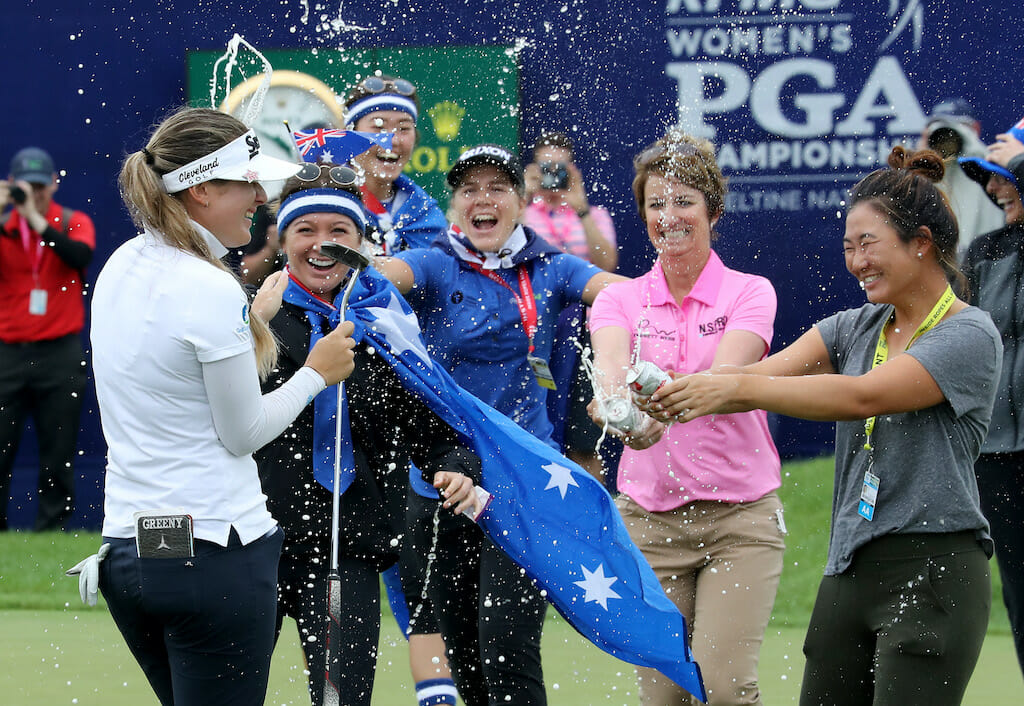 Defending champion Hannah Green has spoken of the impact of her maiden Major win after proving an unlikely but most deserving winner at last year’s KPMG Women’s PGA Championship.

The proud Australian triumphed last summer at Hazeltine National Golf Club outside Minneapolis where she’d come off a missed cut the prior week and certainly wasn’t thinking about winning as she stepped on the grounds of the famous club.

However, no week in golf is ever the same and after a first round 68, Green was inspired to go wire-to-wire to claim a pillar to post victory that she had no idea she was capable of achieving.

“I think just the mental toughness,” Green answered of what she learned about herself at last year’s tournament.

“I didn’t really think I was capable to go wire-to-wire in an event, let alone a major championship. Just hanging in there, and even though I was kind of crashing a little bit on the back nine, at the start of the back nine, in the last round, I was trying to give myself as much positive thoughts as possible and worked really well with my caddie to make sure that I knew that I was still in it.”

This year will be a whole different ball game. No fans, a new October date, and a Covid related bubble that has meant the self-proclaimed home bird’s time away from the land Down Under has extended far beyond what she’d planned.

With so much to play for on the LPGA Tour in the next few weeks, however, including a U.S. Women’s Open in December, the likelihood is that it could be after Christmas until the current PGA champ enjoys a homecoming, though she’s hoping it comes much sooner than that.

“I’m such a homebody, so that’s probably going to be the biggest struggle of the year,” Green said of her extended U.S. staycation. If she were to win again, plans could change. “Hopefully I can get home earlier than Christmas.”

For now, Green has been staying in a house in Orlando, rented by Golf Australia. Fellow Aussie Sue Oh has been staying there, too, and they play rounds sometimes at nearby Isleworth, where Aussies Curtis Luck and Ryan Ruffels of the Korn Ferry Tour are members. It was Tiger Woods’ home base for years.

She headlines a field this week that includes our own Leona Maguire and Stephanie Meadow.