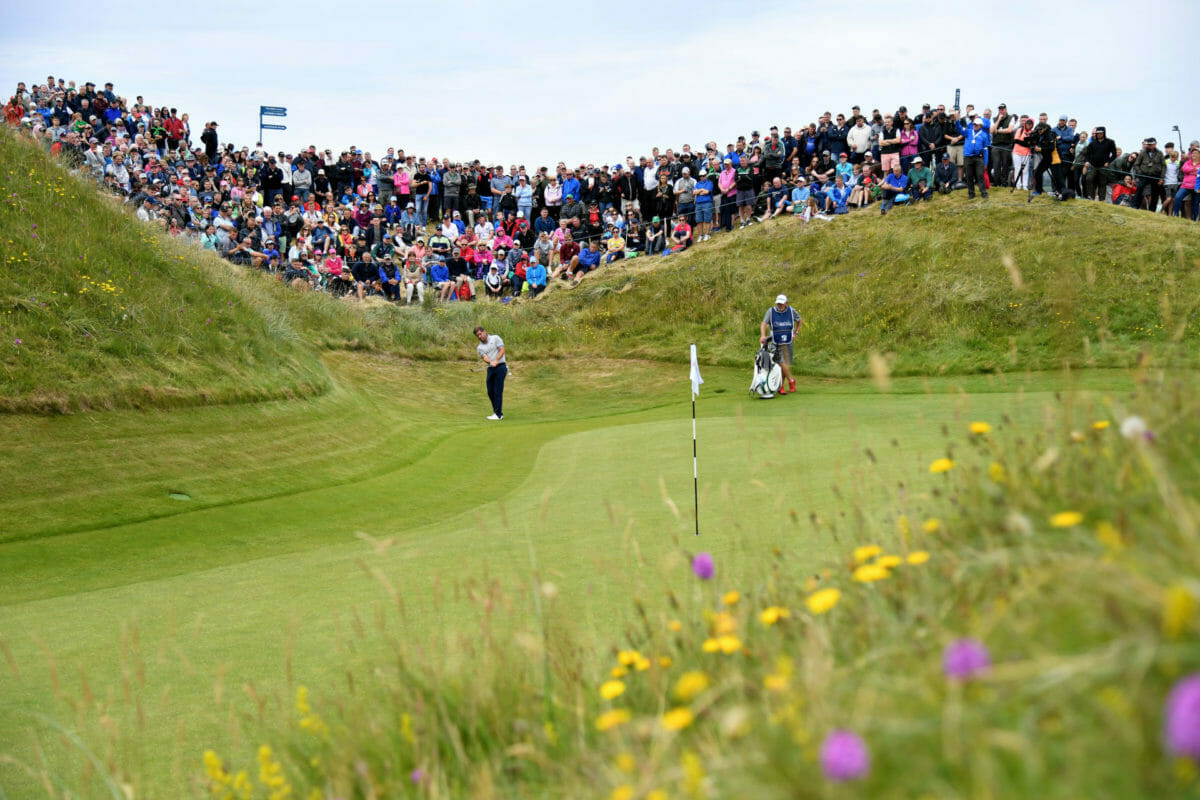 Well, 2020 will do that to you. Winter is coming, the days are shortening. Lockdown 2.0 is imminent and festive mince pies are already on the shelves.

Anyone remember last year’s Irish Open? That famous festival atmosphere created by tournament host Paul McGinley on one of the country’s finest links courses; the town of Lahinch bouncing from its foundation, a stream of Guinness meandering through the legs of the fat cats from Rolex, their watches blinding. Jon O’Rahm tearing into rib-eye steaks every night and winning bucket loads of cash. The Clare county council even organised the weather. Life was good back then!

Today, Covid is the devil. We’ve gone from New York to Galgorm with a Major act to follow. The field is depleted – not even Rory or Graeme. The prize fund is depleted, a mere €1.25 mil. No fans, few media. Little fanfare. But at least we have an Irish Open, I suppose. Given the amount of countries that have lost their national opens altogether, we shouldn’t lose sight of the fact that we’re lucky to be playing at all.

But who is playing?

We have a starting 11 of Irish taking their chance this week in Northern Ireland, headed by pre-tournament favourite Shane Lowry at a miserly 7-1. The Open Champion will be looking to add to the Irish Open title he won at Baltray in 2009 while three-time Major winner Padraig Harrington will again harbour much of the home expectation when he lines out in Thursday’s first round – a former champion of the event in 2007.

We have Tour regulars in Cormac Sharvin, Jonathan Caldwell, Gavin Moynihan and Paul Dunne all looking to make home advantage count. Experienced campaigners and PGA in Ireland regulars Colm Moriarty and Damien McGrane who earned invites long ago, while three amateurs have also been given the opportunity to strut their stuff in pro company.

After a nudge from Lee Westwood, The European Tour selected James Sugrue, fresh off his Major debut at Winged Foot, to make his first Irish Open appearance. The 2019 Amateur Champion admitted he was quite surprised he hadn’t received an invitation any sooner, given his name was deemed worthy of admission at the US Open, The Memorial and the Masters this year.

Also called-up was Kilkenny’s Mark Power after his excellent run at The Brabazon Trophy and The Amateur. Twice an Irish Boys champion, Power has been making waves at Wake Forest where he won the East Lake Cup just two and a half months into his first college semester.

The last spot was given to Holywood’s Tom McKibbin. Not yet finished secondary school, the Irish International made his European Tour debut at the 2018 Shot Clock Masters and looks destined for a massive future in the sport.

But here’s where it gets tricky… No Niall Kearney, a European Tour member who earned his Challenge Tour card and a Cat 22 European Tour Card via Q-School last season and who’s been stuck in the grind of satellite tour golf for over a decade.

No John Ross Galbraith, whose top-20 at Galgorm’s NI Open was arguably his best week as a pro and something the Whitehead man would dearly love to build on if playing opportunities allowed.

No shot at redemption for Conor O’Rourke, who shot the lights out with an eight-under par 64 just last week to win The K Club Pro-am and who was in contention at the NI Open this month until a nightmare weekend put paid to his chances.

And no Simon Thornton, this year’s Irish PGA Champion at Roganstown and a former European Tour winner who not only has been a proud PGA professional for the best part of 15 years, but also dominated this season’s Order of Merit, albeit on a condensed Irish regional calendar.

That’s to name but a few.

Not to take anything away from the merits of the amateurs being included in this week’s field- they’re all incredible players in their own right and if asked to play in an Irish Open, you’re not going to say no – but there’s something ‘closed’ about an Irish ‘Open’ when working professionals and Team Ireland players trying to earn their crust, in a year where their playing opportunities have never been more scarce, are denied the chance to compete at their national open, especially in a non-Rolex Series event.

If ever there was a year to favour those chasing a pay cheque over those who’ll no doubt go on to earn many in time – even without the experience of this week’s Irish Open – 2020 was it.

Then again, 2020 has been a year of misses, so why should this be any different?

According to our sources, the Golfing Union of Ireland had no say in the selection of amateurs to compete at this week’s Irish Open. In fact, the GUI had proposed the name of James Sugrue to the Tour long before Lee Westwood applied star pressure at Winged Foot.

It seems the European Tour has deemed a section of its fee-paying Irish members, who supported events in Austria and the UK Swing, surplus to requirements when it comes to their own home championship.

Far be it from us to burst the European Tour bubble but something smells a bit off when you do.