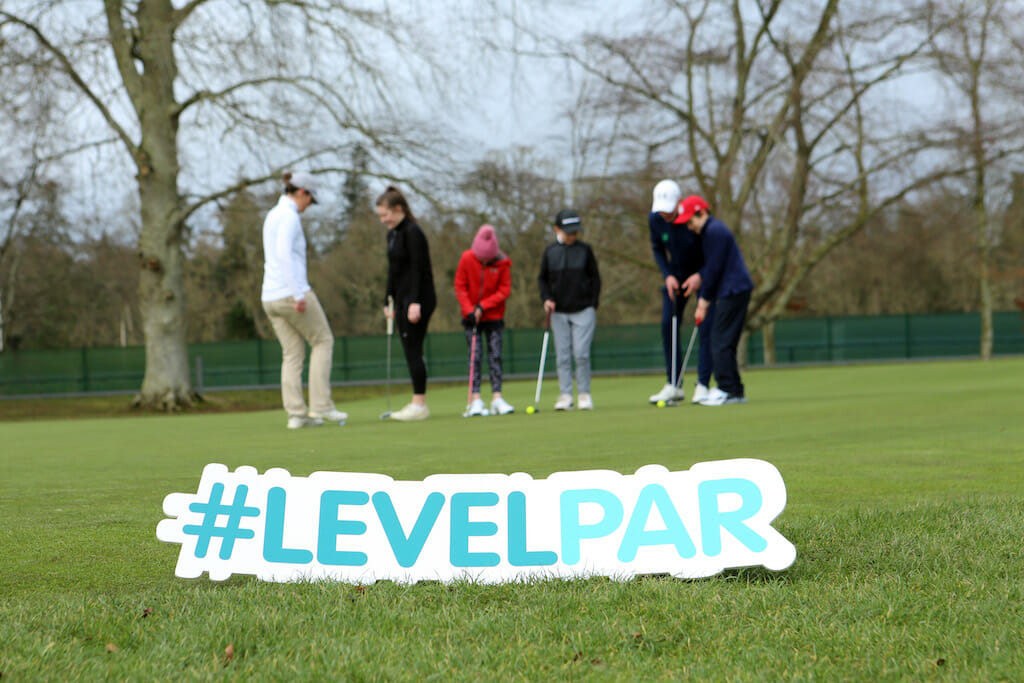 Just over a year ago it was announced that golf was to receive €200,000 from the Sport Ireland Women in Sport fund to subsidise the new Level Par programme, an initiative tasked to establish fairness for all within golf.

Nobody could have predicted what was to come globally when this announcement was made but despite having to go back to the drawing board in many cases, significant progress has been made.

Removing barriers and providing clear pathways to increase involvement of women and girls of all ages, abilities and backgrounds is a core value of the Level Par programme, which has been split into four pillars to mirror those included in Sport Ireland’s policy:

Initially, the Level Par Coaching Programme welcomed six female PGA Professionals to a series of events focussed on upskilling and personal development. Five female rules officials officiated at The Open at Royal Portrush and the female coaching workforce was increased via the PGA Activator programme.

Additionally, a focus group for prospective female PGA Professionals was held, 50 female rules officials were upskilled on the rules of golf and the GB&I Zone Representative on the European Golf Association Executive Committee was announced as Geraldine Henry – the first female from Ireland to be nominated to this committee.

When it comes to participation, anecdotal examples of increased membership in 2020 have been reported. And while exact figures will not be known until the ILGU and GUI publish their annual figures later this year, more specific targets have been met as part of Level Par:

The next major piece of the Level Par programme, closely linked to the establishment of Golf Ireland in January 2021, regards the area of Leadership and Governance.

As of 2019, less than one third of golf clubs in Ireland met the 30%/30%/40% gender balance recommendation alluded to in the Golf Ireland Proposal. The upcoming nominations to the Golf Ireland Regional Executives and Board will result in at least 30% of the elected volunteers being female and 30% male. The same will be visible across all Golf Ireland committees and the goal is for this to be emulated at club level.

Early in 2021 golf clubs will be given the opportunity to attend Level Par seminars and workshops where the area of equality and governance will be discussed. However over 100 clubs have already committed to become signatories of The Women in Golf Charter since it was launched in Ireland in August.

Adoption of the Charter requires national federations, golf clubs and other golf bodies to build on and develop initiatives which will focus on encouraging more women and girls to play and stay within the sport as members of clubs, while also empowering women to enjoy successful careers working within the golf industry. Golf Ireland have become a signatory with the Level Par programme to play an important role in meeting the commitments outlined.

Of course, the Covid-19 Pandemic put stop to various activities nationwide. The Arnold Palmer Cup, scheduled to be held at Lahinch last June, was to be the first event where male and female rules officials were in attendance in equal numbers. A Level Par Girls Camp and some Golf4Girls4Life Festival activity also had to be cancelled for this year but the #StayAtHome Q&A Series saw a selection of players, coaches and staff share their stories to 10,000 viewers and funding was redirected to provide 55 clubs with a girls’ coaching grant of €300.

Although much is still to be achieved, Level Par has been tasked as the programme to drive golf forward on the island of Ireland.