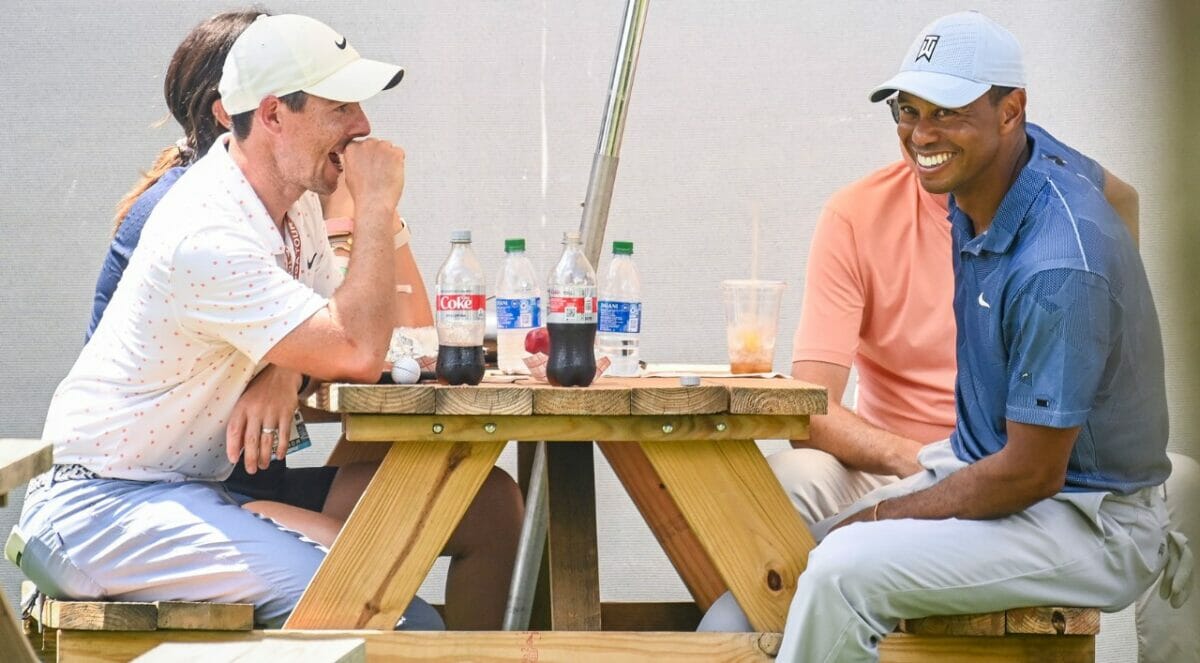 Rory and Tiger at a picnic table day 3 2020 Northern Trust. Courtesy of the PGA Tour

When was the last time the two ball of Tiger Woods and Rory McIlroy ended a third round in any tournament at lunch?

That’s what happened on day three of the Northern Trust with the now good friends sitting down at a wooden picnic table to enjoy their lunch break and chew over the bizarre events of the proceeding four hours or so.

The duo, with a combined 19 Majors, had made a complete ‘meal’ of their third round on the TPC Boston course

Not that it mattered as the pair were all smiles enjoying bottles of water and Coke on a day that clearly was not their best golf.

Woods did win bragging rights by posting a disappointing two-over 73 and dropped back to 67th place at one-under par while McIlroy shot a 74 to be at level par and in 68th, just two shots ahead of double Australian Open winner, Matt Jones who is at the tail of the field.

Woods and McIlroy had only just made it to the weekend rounds of the opening event on the 2019/20 ‘Play-Off Series’ with 36-hole scores at three-under par on the TPC Boston course.

Sadly, round three was nothing like their 2012 BMW Championship head-to-head when Woods shot scores of 65-67 and McIlroy 64-68 in the same opening two round group to be sharing second place through 36 holes.

It was also nothing like later in 2012 when Woods and McIlroy squared-off in China in the ‘Duel at Lake Jinsha Lake’ when Rory, just months from signing with Nike, edged out Tiger by a shot in the most bizarre golf event this journalist has ever attended.

No, day three on the outskirts of Boston was a case of who could finish their round with the least bogeys, double bogeys and in McIlroy’s case, triple-bogeys.

Woods hit 12 of 14 fairways in his 73 but could then manage to find 11 greens in regulation.

McIlroy began his round in the company of his 15-time Major Champion playing partner – 3, 8 and 2 – that means birdie, triple-bogey and birdie.

After starting by holing a seven-foot birdie, McIlroy from 222 yards came up short of the green at the par-5 second. McIlroy then looked on in total amazement when, playing out of a marshy hazard, his recovery hit a rock and bounced backward, this time into the water.

I don’t think we’ve ever seen McIlroy play such a shot in his now 13-year pro career.

He compounded matters by three-putting from 40 feet for a triple-bogey ‘8’.

Later, McIlroy was left of the fairway at the par-4 sixth, then from 151 yards he went left of the green into some gnarly native grass. There were two whacks with a wedge to get it out of the native grass, then a third to find the green, from where he two-putted from 12 feet.

Two triples in six holes is hardly the start McIlroy envisioned and it meant that the two icons were a combined 5-over, but they proceeded onward with improved golf, even if the scoring touch was not present.

McIlroy, after the choppy sixth, played his final 12 holes in 1 under, birdies at the par-4 10th and par-5 18th against a lone bogey at the par-4 14th at least giving him a positive finish to savour.

Woods birdied the par-4 ninth to make the turn in level-par 36, but bogeyed Nos. 11, 12 and 14 before negotiating a deft two-putt birdie from 60 feet, up a steep swale left of the green, then down a slippery slope.

For the golfing purists, McIlroy found just six of 14 fairways and while he managed to hit 13 greens in regulation, he produced 32 putts.

No formal comments from the duo after the round but the sight of them sitting together at a picnic table said it all.

I guess you now know why golf was termed golf!

Meanwhile, at the top of the leaderboard, Dustin Johnson produced a scintillating moving day 64 to add to his 60 on Friday to storm into a five-shot advantage ahead of the final round.

Johnson capped his round with a birdie-eagle finish, holing a 40 footer at his 54th hole to take full control at 22-under par amongst an all-American front three that includes Harris English and Scottie Scheffler.

“Obviously I’m in a great position and like where I’m at, but I’m still going to have to go out and shoot a good score,” said DJ.

“You can go low out here and guys are going low every day, especially with the conditions we have: Perfect greens, golf course is in great shape and not a lot of wind.

“Obviously guys are going to shoot pretty low. So I still need to go out and play a good round.”