Rahm’s rise to No. 1 tempered by loss of two close relatives 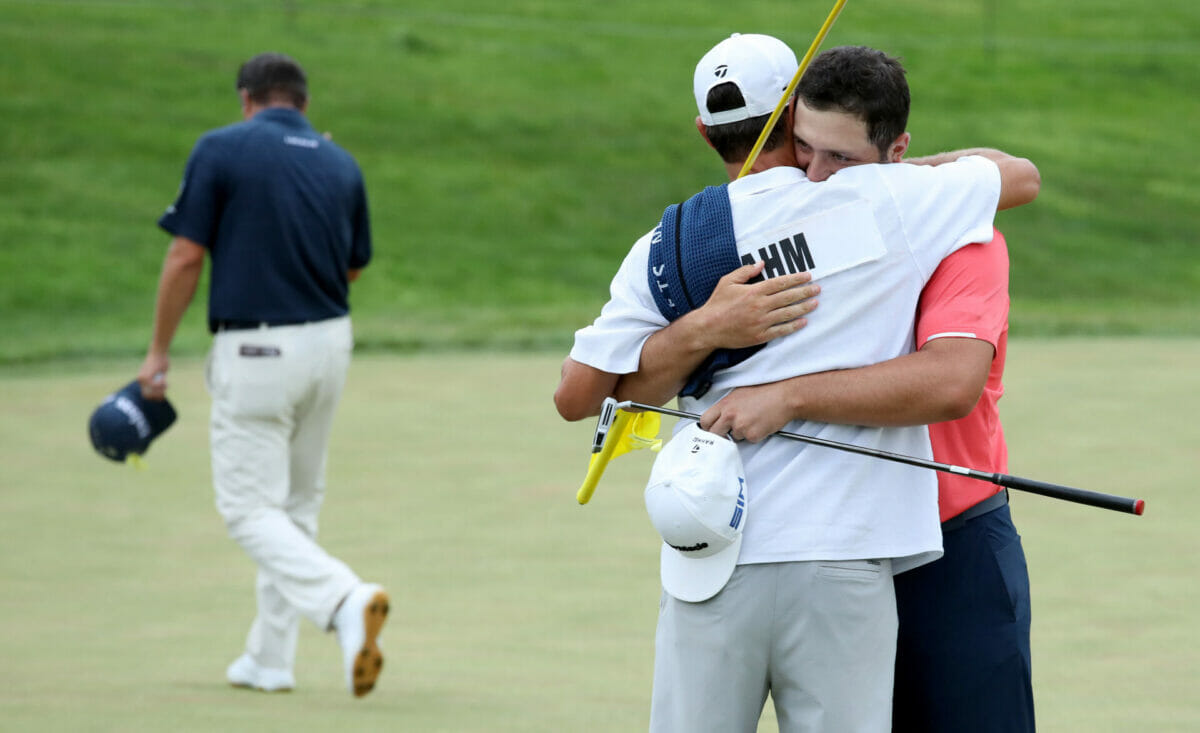 Jon Rahm’s rise to World No. 1 has been tempered by the passing of two very close relatives during this Coronavirus pandemic.

The relatives, a very close grandmother and an aunt to his mother, died not due to the virus itself but Rahm suspects it was due to issues related to the worldwide pandemic.

And Rahm, who replaced Rory McIlroy as the game’s best in capturing the Memorial in a very dramatic closing nine holes, spoke of the emotion in dealing with matters taking place back over the weekend in his native Spain.

“They did not die because of Covid, but I think they did pass away because of the mental effects of the quarantine,” said Rahm.

“Both of them were in nursing homes. One of them was my mom’s mom, and I’m not going to say names. I don’t think my family wants the attention in that sense.

“But it just came out earlier for me, and it was my mom’s mom is the person that when I was growing up spent the most amount of time with me outside my parents. She taught me so many things and I have so many memories with her. She passed away actually Wednesday of Travelers, and then on Saturday they took her ashes to her family rest spot in Madrid.

“So very emotional, you know.

“The other person was my mom’s aunt. Still somebody we were all close with. Still, you know, it’s — again, it goes to show there’s more important things in life than me accomplishing what I accomplished today.

“We’re going through a pandemic. People are dying for whatever reason it is, and whether you believe it or not, it’s going to happen physically or mentally — it could happen to me, and still does sometimes.

“Through what we’ve gone through there’s the great news of my brother having his first daughter, so new life in the family.

“Now I’ve accomplished this. I think we have a lot of reasons to enjoy the next few days.”

Rahm went into the final round of the Memorial leading by four shots and with nine holes to play, the 25-year was in front by eight and on target to break Tiger Wood’ Memorial record of winning by seven in 2001.

To say golf is a funny game, is a total understatement as Rahm proceeded to drop three shots in two holes and then dropped a fourth with a bogey on 14.

Rahm then pulled off the shot of the tournament in holing a chip shot from rough for a birdie well left of the par-3 16th, ranked the hardest hole over the four days.

Rahm was elated and fist-pumping as he walked onto the green to be congratulated by nearest rival Ryan Palmer, his winning partner earlier last year at the Zurich Classic at New Orleans.

Rahm was now five shots clear with two holes to play but, as the TV commercial says, ‘there’s more’.

As Rahm headed down the 72nd video footage revealed he had unknowingly moved his ball at address before chipping-in at the 16th and while tournament host Jack Nicklaus was waiting by to share his hand, so too was a Tour official leading him away to view TV footage of the incident.

Rahm was slapped with a two-shot penalty for a round of 73 but it didn’t really matter as he’d still won by three shots and he had again matched another feat of boyhood hero, Seve Ballesteros in going to World No. 1

“Golf is just what I do, it’s not who I am and that’s the best way I can explain it,” he said.

“It’s a goal accomplished, yes. If anything, it fuels me to know that if I keep this trajectory I’ll be able to accomplish many more things in the future. It’s added motivation that I have the talent that I have, and I need to keep working on it. It’s as simple as that.

“But it doesn’t change the core of who I am, honestly. Like I’ve been doing all week, I’m going to go home with my wife. We’re probably going to watch a kids’ movie like ‘How to Train Your Dragon’, and go to sleep.

“The one thing I’ll do differently is I will go get a milkshake. I did not do it any of the competition days. I think Wednesday after the charity event is the last one I had, so I’m really looking forward to getting a milkshake.

“So, nothing that I’ve done has changed the core person I am off the golf course. Like I said, golf is just a part of my life. It’s what I do. If I ever had to choose, and I’ve said this before, between being a good husband and a good father and a good golfer, I’d always choose being a good husband and a good father. I’d rather be a good person outside of it, and I take pride in that and hopefully I can keep doing it.

“It still doesn’t take from the amount of pride I feel with myself about doing it. But, no, it doesn’t change who I am.”