DeChambeau caught up in rules controversy after Memorial missed cut 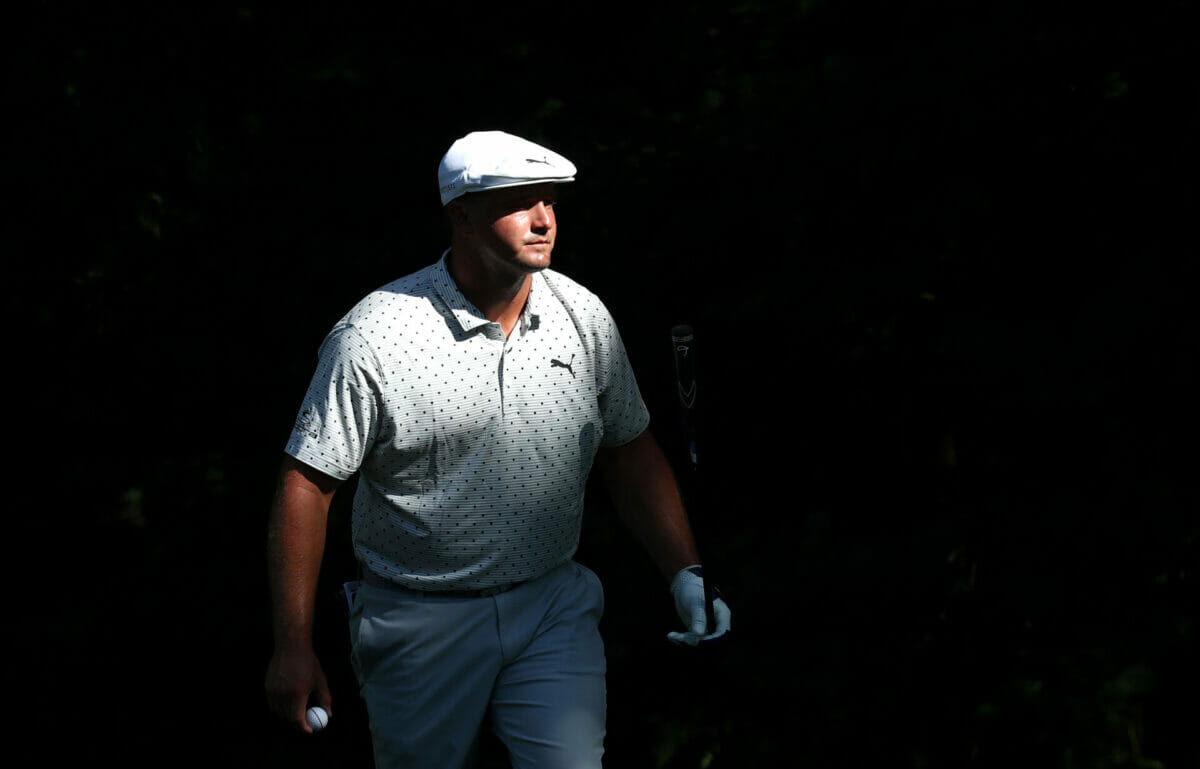 Bryson DeChambeau crashed out of the Memorial amid a social media storm after he appeared to break the rules on two occasions in taking a ’10’ at the 15th hole late in his round.

DeChambeau has been the most talked about player since the Tour returned to competition mid last month in Texas.

The beefed-up American capped a superb run of top-10s with an emphatic victory last fortnight in the aptly named Rocket Mortgage Classic.

However, this new-look but still straight talking 26-year old was already facing a social media storm before he’d ended his round in missing the cut at five-over par.

DeChambeau began round two of ‘Jack’s Event’ at one-over par and even after two early bogeys, he regrouped with three straight birdies from the fifth hole before it began to turn pear-shape with a bogey at his 10th.

The World No. 11 sent his drive into the stream running down the left side of the hole and after a penalty drop, he put his third well right that was believed to be OB over an iron boundary fence.

DeChambeau then played what would be now his fifth but as SKY’s Andrew Coltart pointed out, he dropped the ball about a foot further away from where he had dropped to take his third.

And it emerged on a social media video that DeChambeau seemed to be improving his lie in the rough ahead of taking his fifth shot – that also headed well right – but in heading to his ball, the American noticed his third shot lying against the iron fence.

Bryson taking a leaf out of Patrick Reed’s book to improve his lie whilst dropping on 15 … ?? Looks a little suspect … ? ?@NoLayingUp @TronCarterNLU @DJPie pic.twitter.com/Bn4AkPYRP2

Insistent his ball was in bounds, DeChambeau asked a rules official, who told him otherwise.

“I don’t believe that,” DeChambeau responded. “Can I get a second opinion, please?”

He also muttered to himself: “They’re giving me a garbage ruling like usual.”

A second rules official also deemed the ball out of bounds, though DeChambeau lobbied hard, even bringing up Phil Mickelson’s shot from against a mesh fence at Bay Hill last March.

“From my perspective, that would be technically still in,” DeChambeau said.

“I was wondering if I could hop the fence and hit it?”

Eventually, DeChambeau scooped up his ball in disgust and hit what was now his seventh shot onto the green. He then three-putted for a ’10’.

Coltart spoke that coming up against a boundary fence of an OB post is one of the simplest rules in golf and that is you cannot move the post or in DeChambeau’s case, the iron fence.

“I am slightly disappointed and surprised,” said Coltart in referring to DeChambeau’s actions.

When DeChambeau finally found the green with his seventh shot, he then three-putted for his ’10’ for a round of 76 to miss the three-over par cut by two shots.