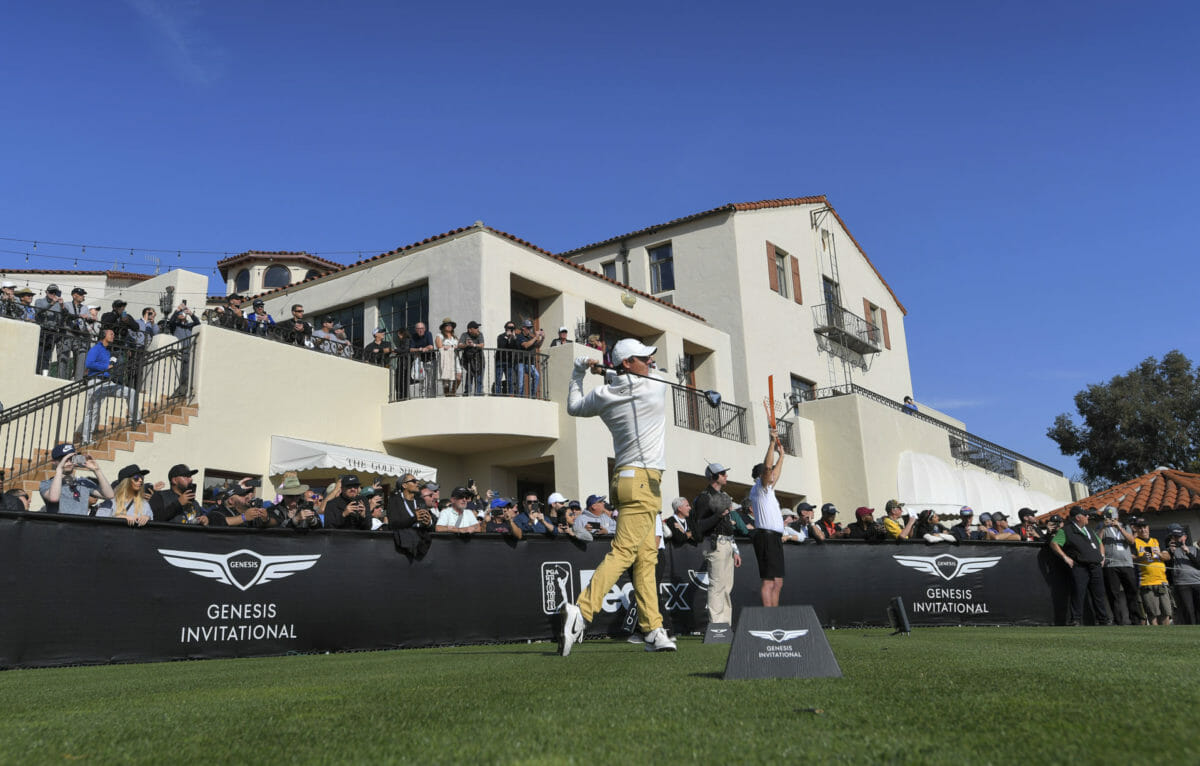 World No. 1 Rory McIlroy brilliantly grabbed two eagles in the space of just three holes to superbly pamper his lofty stature on day one of the Genesis Invitational in suburban LA.

McIlroy had been yet again struggling with the shortest club in his bag to be one-over par through seven holes before eagling his eighth and 10th holes in an eventual score of three-under par 68 for a then share of fifth place on the famed Riviera course.

McIlroy’s first day effort on ‘Hollywood’s Course’ is a first occasion in three years the Holywood golfing starlet has broken 70 on day one bettering his quickest ever Riviera opening by three strokes.

McIlroy was heading-up his last hole having teed-off earlier in the day as tournament host, Tiger Woods was moments shy of draining a 24-footer for an eagle ‘2’ at his opening hole of the event.

McIlroy kick-started his round in finding the bunker behind the green at the 310-yard par-4 10th hole but then left his second in the bunker before splashing out to seven-feet before missing his birdie putt.

He then missed a four-footer for birdie on the 11th hole or his second of the round and proceeded to three-putt the 12th for bogey to be one-over ahead of a trio of pars.

He then drove the green at the par-5 17th before sending a laser-like 35-footer to the bottom of the cup for an eagle ‘3’ to go from one-over to one-under in an outward nine of 14 putts.

He gave one shot back with a bogey on the uphill par-5 18th but then sent a booming 300-yard drive down off the very elevated par-5 first or his 10th hole tee ahead of landing his second shot, from 177-yards out, to just five-foot for a second eagle ‘3’ of his round.

McIlroy’s PGA Tour overall stats for ‘eagles’ is one eagle in every 54 holes and he now had bagged two in three holes.

He parred the next three holes before moving to three-under in holing a 14-footer for birdie at the par-4 fifth hole, the 14th of his day.

McIlroy then post pars over his closing four holes including just barely missing a 14-footer ahead of climbing the stairs to the all-inspiring clubhouse.

“It was a good round and good after my start when I was one-over through seven holes”, he said.

“I missed a couple of short ones early on but then went through a stretch of a few pars and not dropping any shots before the eagle on 17 that kick-started things a little bit for me.”

McIlroy ended his round a shot clear of now arch-rival Brooks Koepka and needs to remain clear of the American at the close of the event to match England’s Nick Faldo in a tie for the third-longest stance as World No. 1 and that being 97 accumulated weeks.

“He (Newport) makes a good argument why we should not be on screens as much as we are but then we do live in the 21st Century and you can’t get by without a phone or internet,” he said.

“But it’s limiting the time you are on screens and making sure that when you are using it, you are doing it intentionally and not just by habit.

“I find myself so much on Instagram and scrolling for no good reason, so I am just trying to get away from that and in scrolling on Instagram I am inevitably come across something that features me.