PGA Captain Peter Hanna has paid tribute to Ernest Jones, a predecessor in the role who has passed away at the age of 87.

Hanna said: “I’m proud, as a fellow PGA of Ireland Member, to follow in Ernie’s footsteps as captain.

“He was a professional golfer who we, as trainees, aspired to be. He had The PGA at his heart, was very well respected in the Association, and was a gentleman in every way – both on and off the course.

“His game was always very steady and that was the way he lived his life. He was a lovely man who will be sorely missed.”

Ernie began his career as an assistant to Phil Lawlor at the Royal Curragh Golf Club, Co Kildare, in 1948 and became a PGA Member eight years later.

He was the head PGA Professional at Bangor Golf Club, Co Down, for 16 years and followed up by fulfilling the same role at two of the most prestigious clubs on the island of Ireland: Royal County Down and the K Club, Co Kildare. 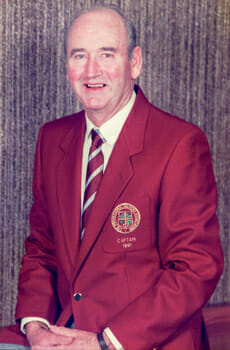 He spent 16 years at the former before he was head-hunted by the latter’s owner, Michael Smurfit, in advance of the 2006 Ryder Cup.

In addition to being a sought after and highly-regarded club professional, Ernie was an accomplished player.

Two years earlier at Royal Birkdale in 1969, Ernie refereed one of the Ryder Cup’s most memorable encounters: the singles between Jack Nicklaus and Tony Jacklin which saw the former concede a three-foot putt on the final hole, a sporting gesture that resulted in the match ending 16 – 16. Ernie also competed at the Open on eight occasions, making the cut to finish in a tie for 41st in 1972.

Commenting on Ernie’s contribution to The PGA and the game of golf, Robert Maxfield, the Association’s chief executive, said: “Ernie had a stellar career both on and off the golf course.

“And whether on or off it he was a credit to The PGA and represented everything the game stands for. We have lost a friend as well as a distinguished Member and on behalf of The PGA I extend our heartfelt and sincere condolences to his wife Marie and six surviving children.”

*The funeral of Ernie Jones will be held in Newcastle, Co Down, at 1pm on January 3. The requiem mass is at the Church of Our Lady of the Assumption with the burial afterwards at St Patrick’s Cemetery, Bryansford.

Article courtesy of the PGA