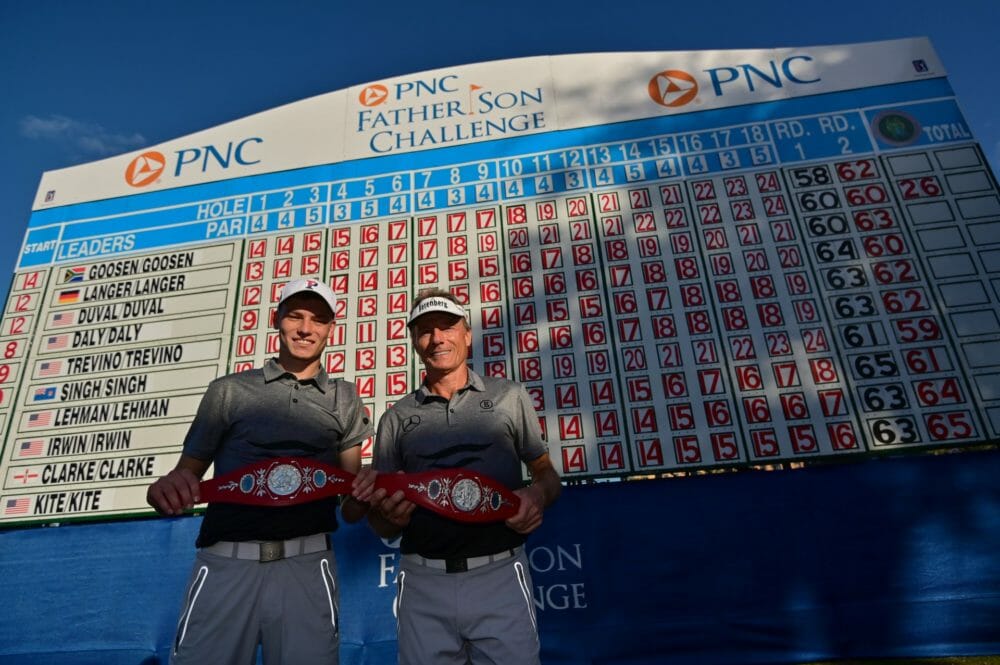 Darren Clarke and his son, Tyrone added a 64 to their opening 63 to grab a highly respectable share of 9th spot at the 2019 PNC Father Son Challenge in Orlando, Grande Lakes.

The Ulstermen gelled well for the 36-hole competition, reaching a 17-under par tally at The Ritz-Carlton Golf Club.

That was the best of the Irish challenge as Team Harrington were unable to keep pace with some hot scoring on day two.

Alongside 15-year old Paddy, three-time Major winner Padraig and his capable son combined for a 65, adding to their opening 64 for a 15-under par total good enough for a tie for 13th.

However, try as they might, there was some incredible scoring at the top of the pile with Bernhard Langer and son, Jason posting a second successive 60 (-12) before clinching victory with a dramatic eagle on the first hole of sudden death, the par-5 18th.

The Langers triumphed over Team Goosen and Team Lehman after 19-year old Jason, upon taking his father’s drive in the fairway, fired a soaring 270 yard 3-wood to 15 feet before calmly rolling in the putt to seal the win.

“I’ve seen clutch shots in majors and Ryder Cups, all over the place. For our family it doesn’t get much better than that one,” said Langer Senior.

“He hit an unbelievable 3-wood in regulation and it came just a couple yards short, then hit an even better one in the playoff. 270 into the wind and he flew it all the way there. Something I do not know how to do, I don’t have that in me, so it was fun for me to watch. The noise the ball made when he struck it was spectacular.”

Asked who Bernhard would bring back to partner him next year, given his reputation for rotating his starting line-up, he replied; “If somebody wins, they get the chance to defend, but we will have a whole year to discuss.”

Meanwhile, Annika Sorenstam, who became the first female professional to tee-up at the Father Son Challenge, carded a second round 71 and expressed her enjoyment after a history making appearance.

“It’s been a wonderful week overall, with a wonderful ‘Thank you’ to PNC for hosting us and having us here. Thanks to all fans who came out and families, for supporting us. The whole week was just awesome.”