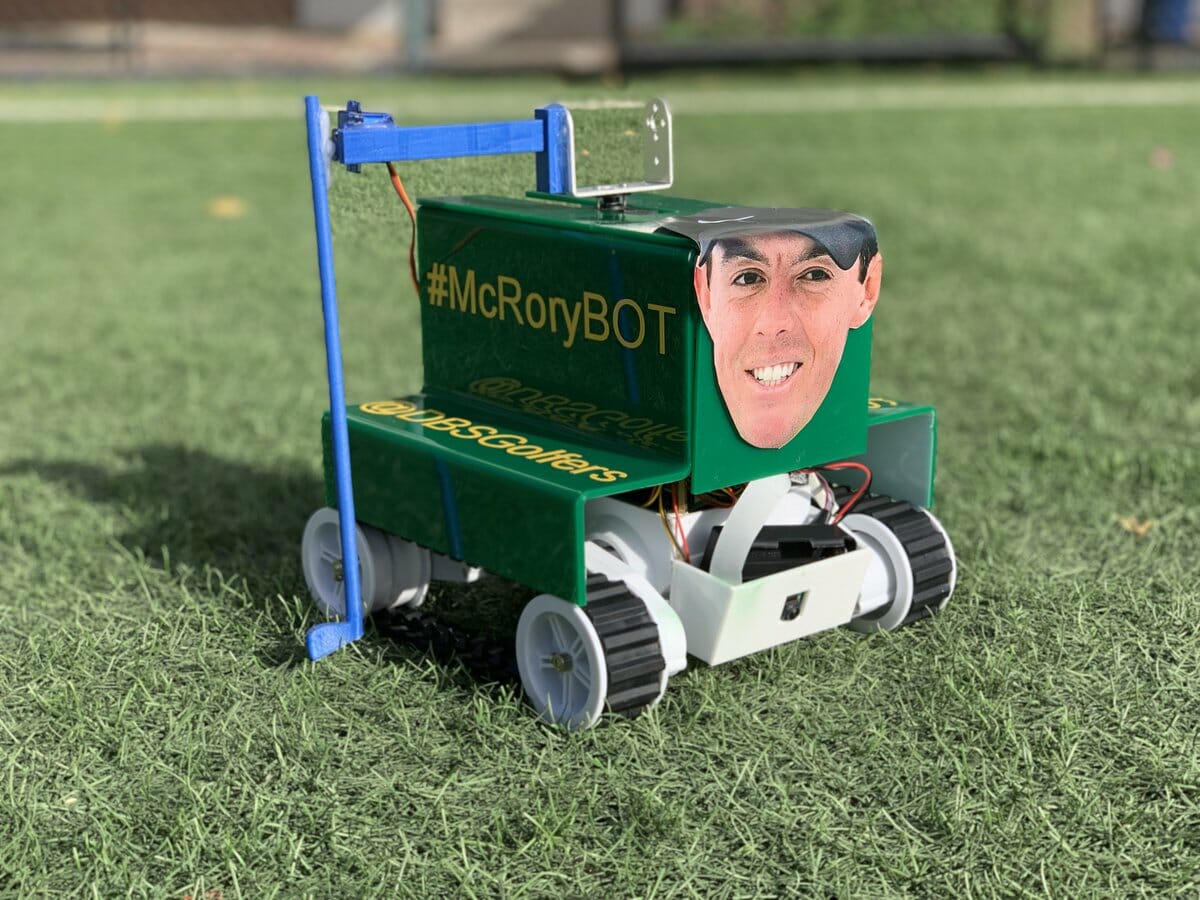 ‘McRory’ is a small four-wheeled, golf-playing robot that sports a photograph of a smiling current World No.2, and could be the favourite to land a golf-related victory title of a very unique kind.

The robot will be among a host of artificial intelligence GolfBots entering a four-day competition taking place from November 21st to 24th at Jumeirah Golf Estates, and in association with Canada’s leading Ed-Tech company, Kalebr, the European Tour, Re:Set and Dubai Autism Centre.

Teams of 100 young learners, aged between 10 to 13, who have trained their very own artificial intelligence GolfBots to golf pro status, will compete against other innovative learners from around the country as they traverse a custom 3 hole mini-course as reported in a DubaiBlog article on www.DubaiCityGuide.com

Alongside GolfBot’s AI model training, competitors will take part in workshops, guided tours and practice rounds for the finalists, as well as participate in free putting rounds at the mini-AI course.

Battling it out on the mini-golf course, competitors will hope to win the DP World Tour Championship presented by BMW AGMC Trophy with a Grand Prize of a special behind the scenes tour followed by front row seats reserved on the 18th Grandstand for the winners and their teachers.

Expert judges, community votes and social media interaction are combined to decide the winners in categories ranging from creativity to sportsmanship to STEAMathlete pro level, with exciting prizes awarded for all the best efforts across the fairway.

Young learner teams will be scored on innovation, creativity, sustainability, positivity and their trained AI model’s ability to finish the mini-course with the least amount of human intervention and lowest strokes. Empowering and engaging learners with 21st-century workplace skills, the grassroots premise of STEAMathalon is that learners discover, innovate, market and celebrate.

Tom Phillips, Head of the European Tour Middle East said the European Tour was excited to be a part of the first STEAMathalon hosted at DP World Tour Championship to highlight innovation and inclusivity within the game of golf.

“Everyone at the European Tour is thrilled to be hosting the STEAMathalon presented by BMW-AGMC at the season-ending DP World Tour Championship, the first to be held with an official golf tournament,” said Phillips. “Innovation is something that the European Tour is really driving right now with the addition of new and fun formats of golf that are accessible to everyone. I’m really looking forward to seeing the GolfBots in action and to learning more from the innovative minds behind them,” he said.

When speaking on DP World Tour Championship STEAMathalon presented by BMW-AGMC, Aaditya Tangri, Co-Founder & CEO of Kalebr Americas and Founder of STEAMathalon explained the importance of integrating STEAM into the core curriculum and using real-world moments in order to truly prepare the next generation with future skills for a world we do not yet know.

“Many schools in the UAE and around the world wish to promote STEAM and innovation as part of their core curriculum and not just as an extracurricular activity. DP World Tour Championship STEAMathalon presented by BMW-AGMC aims to promote AI x Tolerance x Sports in schools, while also demonstrating best practice on how to bridge education with corporate industry partners,” said Tangri.