Wiesberger out to make Race tough for Lowry & co 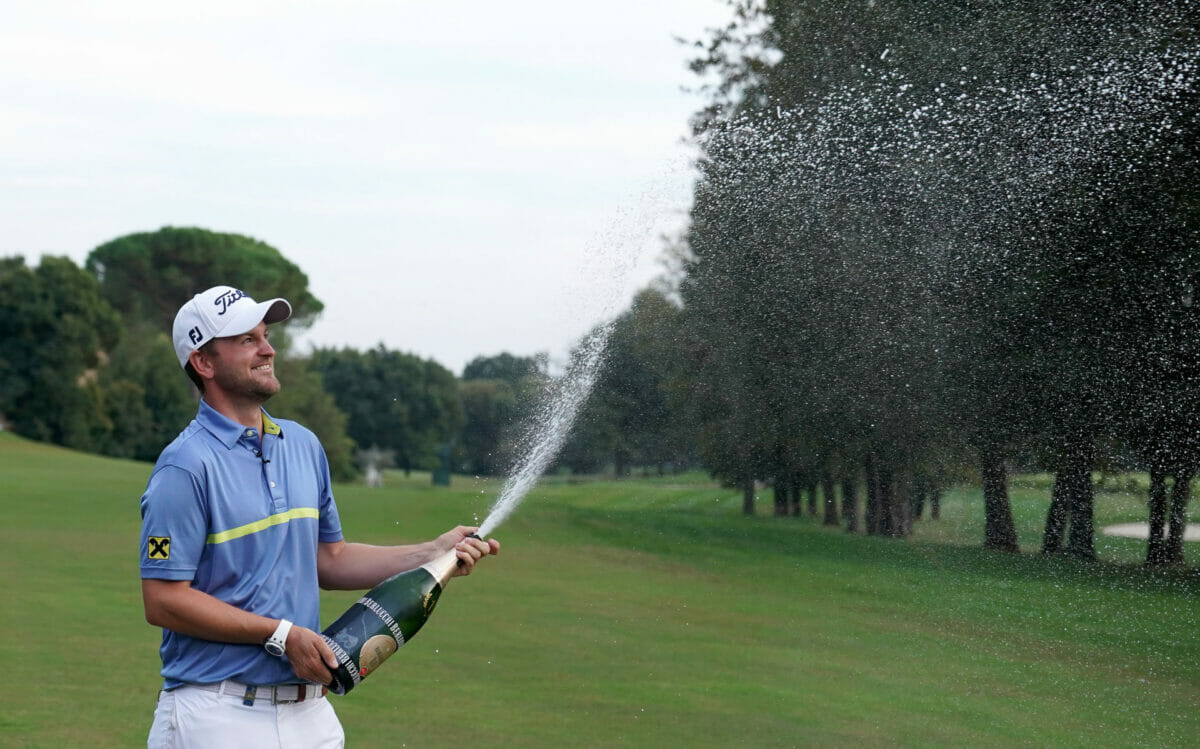 The winner Bernd Wiesberger (AUT) celebrates with a champagne bottle during the award ceremony at the end of the Round 4 at Golf Italian Open in Rome, Italy on October 13, 2019 (Photo by Matteo Ciambelli/NurPhoto via Getty Images)

The decision of current European Tour No. 1 Bernd Wiesberger to commit to next month’s Nedbank Challenge is a clear indication that the Austrian is very serious in wishing to capture the 2019 Race to Dubai title.

Wiesberger, who had to miss last year’s Gary Player-hosted event through injury, will tee-up at Sun City in the absence of Jon Rahm and Ireland’s-own Shane Lowry, presently ranked a respective two and three on the Race to Dubai.

All three will be competing in next week’s WGC – HSBC Champions event in Shanghai and then travel to Turkey for the November 7th commencing Turkish Airlines Open, with Lowry confirming to media at the recent Alfred Dunhill Links he will be in Turkey, although the Tour have yet to formally announce the decision.

So, it will mean Wiesberger then heading post the Turkish event to South Africa and without the presence of either Rahm or Lowry in the field, he will look to extend any advantage he may have or, on the flipside of the coin, make-up any ground he may have lost in Shanghai.

That aside, Wiesberger is only player to have won three times this European Tour season and he superbly showed that form when he muscled his way to the top of the rankings in capturing the recent Italian Open, adding the victory in Rome to his Aberdeen Standard Investments Scottish Open triumph in July. His first of three titles this season came at the Made in Denmark in May, kick-starting a run of three wins in just 13 starts.

The 34-year-old, who has won seven times on the European Tour, is bidding also to become the first Austrian to top the season-long Rankings.

“After a fantastic summer, I’m looking to end the season strongly and maintain my position at the top of the Race to Dubai,” said Wiesberger. “There is still so much to play for in the final few weeks of the season, especially with the increase in points on offer, but I couldn’t ask to be in a better position than I am at the moment.

“It was disappointing to miss last year’s Nedbank Golf Challenge due to injury, so I’m looking forward to returning to Sun City next month.”

With its status as one of world golf’s elite tournaments this season with an increase in both the first place prize money and Race to Dubai points – the winner of the 2019 Nedbank Golf Challenge will take home US$2.5 million, an increase on the US$1.25 million won by Lee Westwood last year.

The overall prize fund remains at US$7.5 million, with the balance of the 63-player field from second place onwards playing for a US$5 million prize fund but in Wiesberger’s favour is that this year’s Nedbank Challenge offers an increased haul of Race to Dubai points from 7,500 to 10,000, which places it above what the World Golf Championships tournaments offer in comparison.

Lowry is currently competing at the inaugural Zozo Championship in Japan where he opened with a one-over par effort to sit in a share of 33rd heading into round two. Neither Wiesberger or Rahm are in the PGA Tour event.