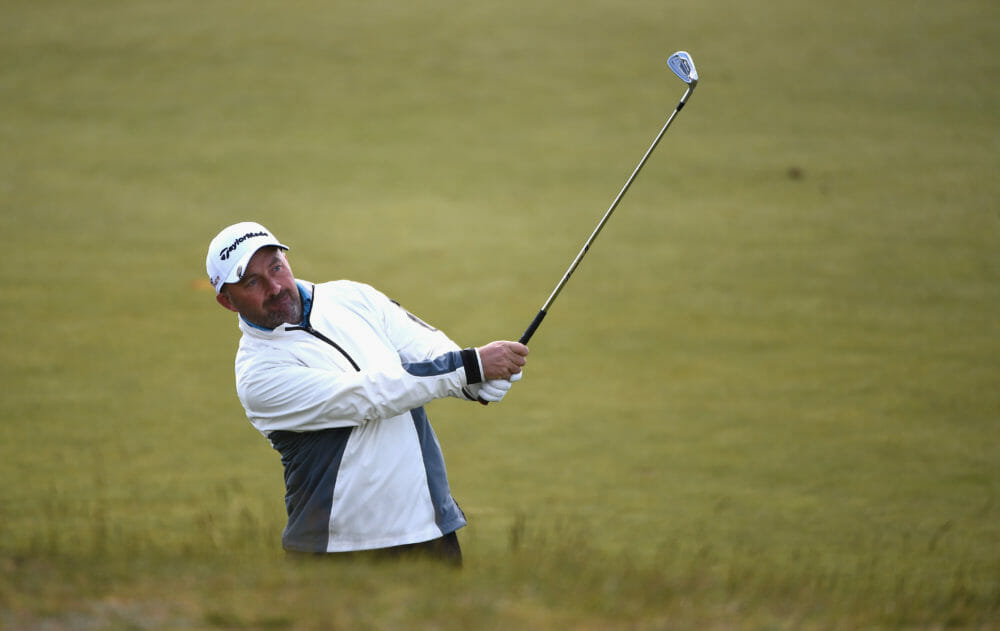 Damien McGrane made light of blustery conditions at Bunclody Golf and Fishing Club storming home in 29 shots to grab control of the 109th Irish PGA Championship. After reaching the turn in a pedestrian one over par 38, the Co. Carlow GC professional suddenly flipped the switch and picked up six birdies on the back nine, including five in a row from the 14th.

“I played lovely in round one (Monday) but my putting was weak. I played lovely again today, the back nine came good for me and I had a really strong finish in tough conditions,” said Damien who opened his campaign with a two-under-par round of 70.

Heading into today’s final round, the 2016 Irish PGA champion has a valuable four-shot cushion over the 2017 Irish PGA champion Tim Rice (Limerick GC).
Damien added; “My whole career I watched the legends of Irish golf play and compete. As a younger man, my ambition was to one day win the Irish Championship which I did at Moyvalley two years ago which was fantastic.
“I’m playing good golf. I like the course here at Bunclody, it’s in great condition, so I’m looking forward to whatever tomorrow brings.”

Overnight leader, Steven Quinlan (SQ Golf) posted a two-over-par round of 74 to drop into a share of third alongside Jimmy Bolger (Kilkenny GC) and David Barry (Douglas GC) on two under par.
“I thought the course set-up was definitely a bit tougher. The wind, combined with some of the pin positions made it more difficult,” said Quinlan.
Barry’s second round 68 was one of only three rounds in the 60’s yesterday and came after he made a putter switch overnight. Michael McGeady, who was very disappointed with his opening round 77 (+5) responded with a three-under-par 69 that moved him up to a tie for 13th.
The cut fell at +12 with 52 players making it through to the final round today. The first group will tee off at 8am with McGrane, Rice and Jimmy Bolger getting started at 11.10am.