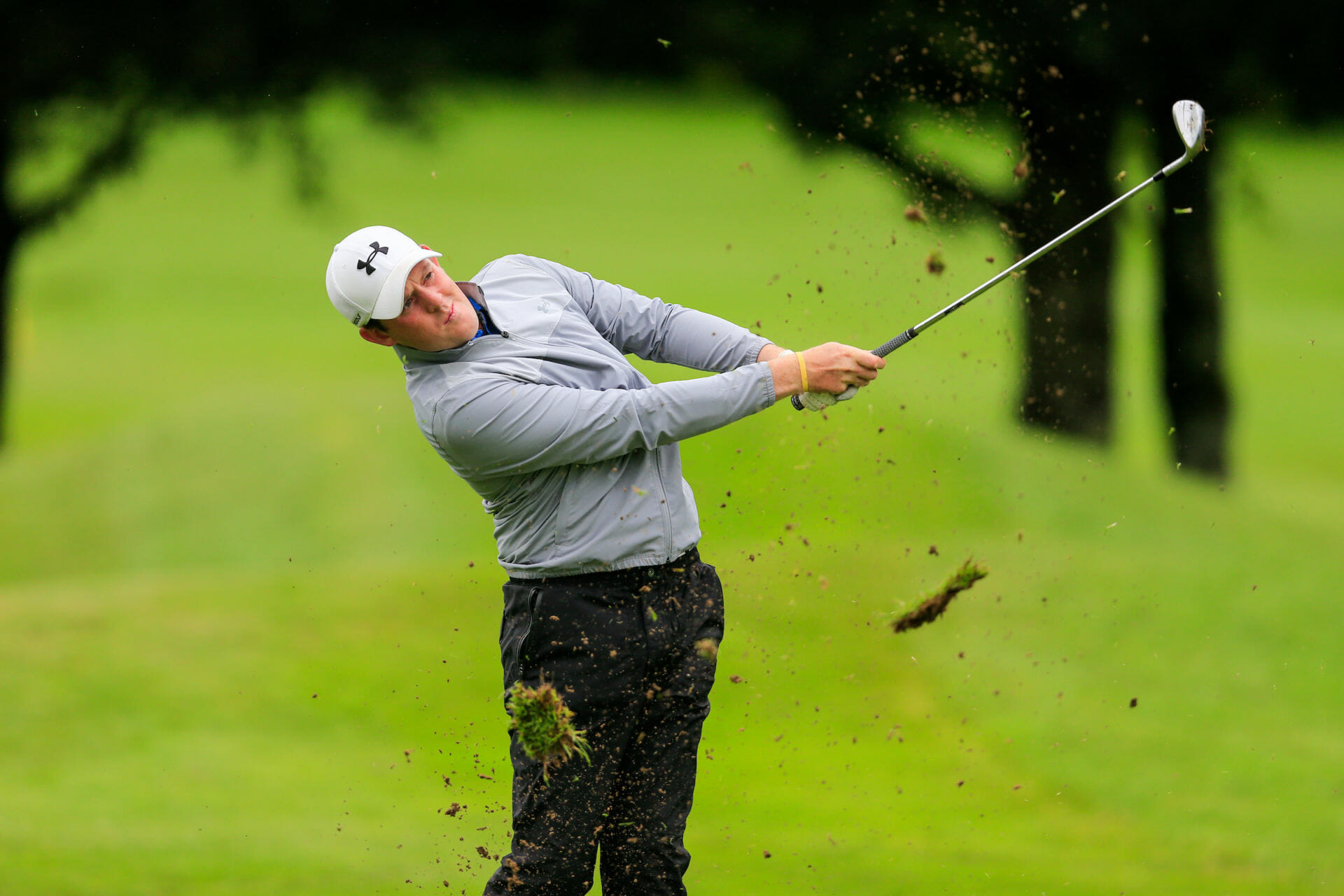 Malone’s Matthew McClean kept his chances of making the Ireland team on the Bridgestone Order of Merit standings as he took control at Mullingar on a day of wet and windy conditions.

McClean played the last seven holes of his second round in five-under par and posted his score just before the worst of the weather moved in. He carded an opening round 70 to add to his second round 69. The Ulster man sits on the mark of five-under par, two clear of Kinsale’s John Murphy and County Louth’s Gerard Dunne.

“This morning was tricky” said McClean afterwards. “Just with how soft the greens were but it was scoreable this morning, we got the nice half of the draw. It was pretty calm a bit of wind but the rain stayed away. This afternoon was much tougher, the front nine was playing very hard. I was two-over through nine going the opposite way but was lucky to hole a few putts and I had a pitch in on 17 there for 5-under par for the final seven which helps the card a lot.”

McClean will need to finish inside the top two and hope that others fall away on the second day of the Mullingar Scratch Trophy which is being held in association with GUI Leinster Golf for the first time.

Keith Egan of Carton House and Colm Campbell from Warrenpoint are both also still in contention to finish in the top three of the Bridgestone Order of Merit making the final two rounds crucial in the selection process. A place in the top three guarantees selection to the Ireland side for the Home Internationals at Lahinch next month.

“It’s been pretty solid. I just really haven’t got the final push towards the end of the match plays but it’s been solid. I been playing good all year, I just hope I can go a wee bit further now” said McClean afterwards.

John Murphy, who has had a season he describes as ‘disappointing’ is starting to feel better about his game and from three-under par the student will be a threat on Sunday. “It’s tough out there. This afternoon the wind got up there and I was playing with Colly (Colm Campbell) and I knew he was leading [after round one] so it was good to have something to go by off him.  We had good fun out there. It was tricky but we made the most of tough conditions and at times we made it look a little tricky as well, the way we were hitting it but we enjoyed it out there.”

“Today was the first day in a long time that I held a couple of putts so it’s nice to get that confidence back and hopefully I can push on from there.”

Rob Brazill, runner up at the AIG Irish Close in Ballybunion this week was showing signs of fatigue as he finished the opening 36 holes on two-over par. The Naas member needs to a top 16 finish to pip Ronan Mullarney to the Bridgestone Order of Merit and he sits close to that mark heading into day two.

“Coming from Ballybunion to here I didn’t really have a clue what to do with pitch shots and hitting balls into greens I just couldn’t get the ball close. It was very, very different. The greens are rolling great but it’s just very different to last week. I’m just adjusting. I didn’t touch a clubs from Wednesday until this morning.”

Liam Grehan is the best placed of the home players on four-over par.

Sponsored by Sherry Fitzgerald Davitt & Davitt, the Mullingar Scratch Trophy concludes on Sunday with 36 holes. Action gets underway in round three at 8am and the final round is underway at 1pm. A two-tee start will be in operation on Sunday.