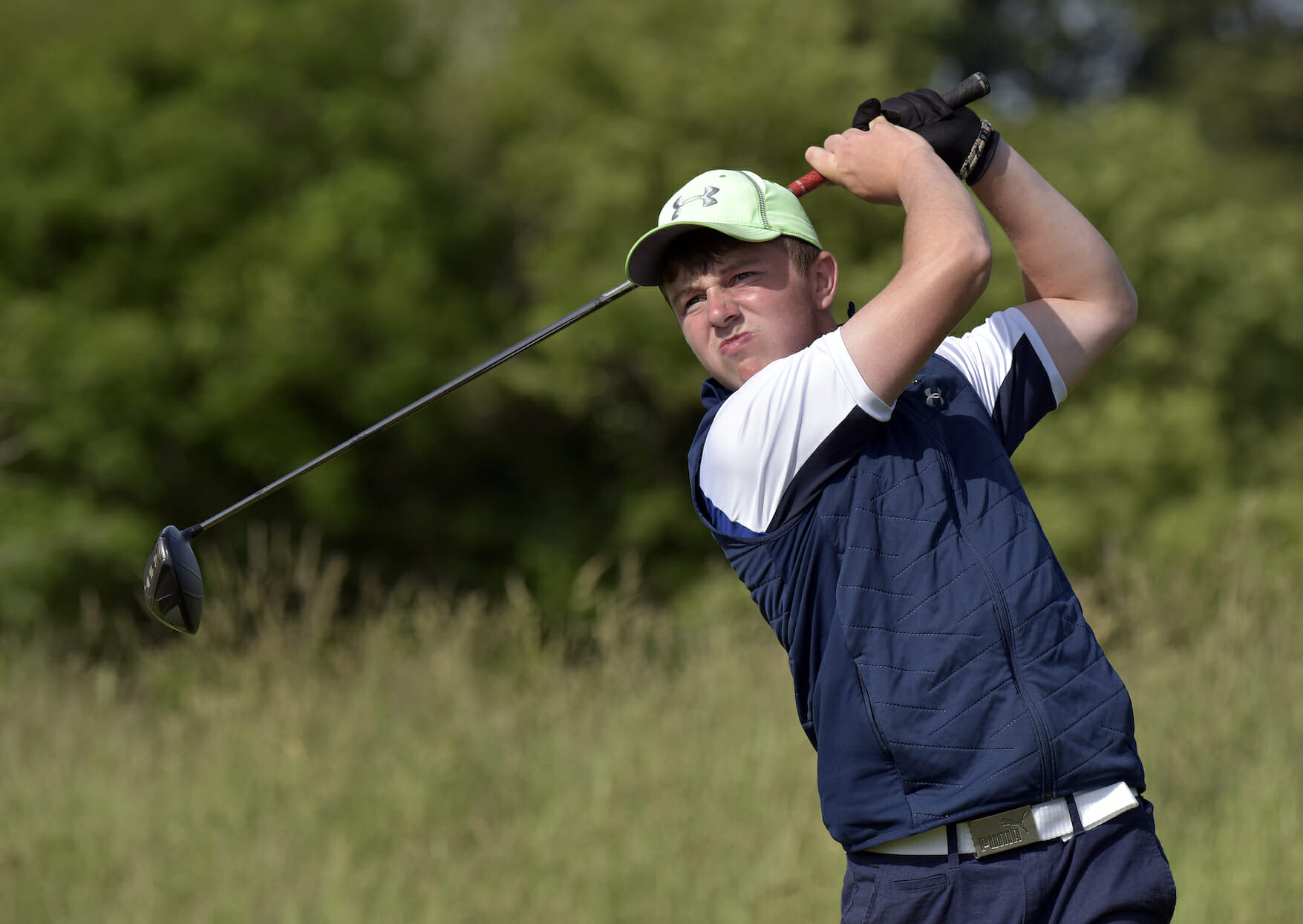 Joseph Byrne (Baltinglass) driving from the 7th tee in the final round of the 2019 Irish Boys Amateur Open Championship at New Forest Golf Club today (28/06/2019). Picture by Pat Cashman

Ireland’s Boys were agonisingly denied their revenge of a year ago as the old enemy England once again came up trumps at the Home Internationals at Asburnham Golf Club.

Having set up a mouth-watering winner takes all tussle after both sides maintained 100% records against Wales and Scotland, it was hoped, on this island at least, that the Boys in Green would summon the strength to avenge their loss of 2018 against their most formidable foe.

And for a while it looked so good. Wins for Tom McKibbin and Luke O’Neill, Josh Mackin and Max Kennedy and Joseph Byrne and Joshua Hill as well as a half point for Fionn Hickey and Dylan Keating put Ireland in a commanding 3½ – 1½ morning session advantage.

As ever, the singles were to decide the fate of the trophy, however. In a titanic battle out first, Conor Gough and Holywood’s McKibbin traded blows but couldn’t be separated in a solid half point for both sides before England seized momentum with two straight points to draw the sides level at 4-4.

Galgorm Castle’s Hill continued his worldly form with a massive 5&4 win to restore Ireland’s slender advantage before the tide really turned. England reeled off three straight points with two of the matches going down 18 and although Fionn Hickey managed to briefly stem the tide, Callum MacFie’s victory over Royal Dublin’s Kennedy sealed the crucial eighth point for England, with Baltinglass’ Byrne’s victory in the final match powerless in preventing another bitter 8-7 loss.

The 8-7 score mirrored that of Ireland’s loss in 2018 but for those Boys in Green who’ll be back next year, no doubt the hunger will run deeper than ever to grab Ireland’s first Boys Home Internationals title since 2013.

“For the second year in a row we’ve just came up short,” said Ireland Captain, Alasdair Gibson. “That’s golf. The first nine holes of the singles we were looking okay and it just turned around a bit. We were always struggling in matches there on the back nine.

“We did very well this morning in the foursomes. The boys played very well. The golf this afternoon was very good. There were a lot of birdies out there and at the end of the day they got more than we did. It was good effort but we just came up short. There’s no shame in losing to a strong team like England.”