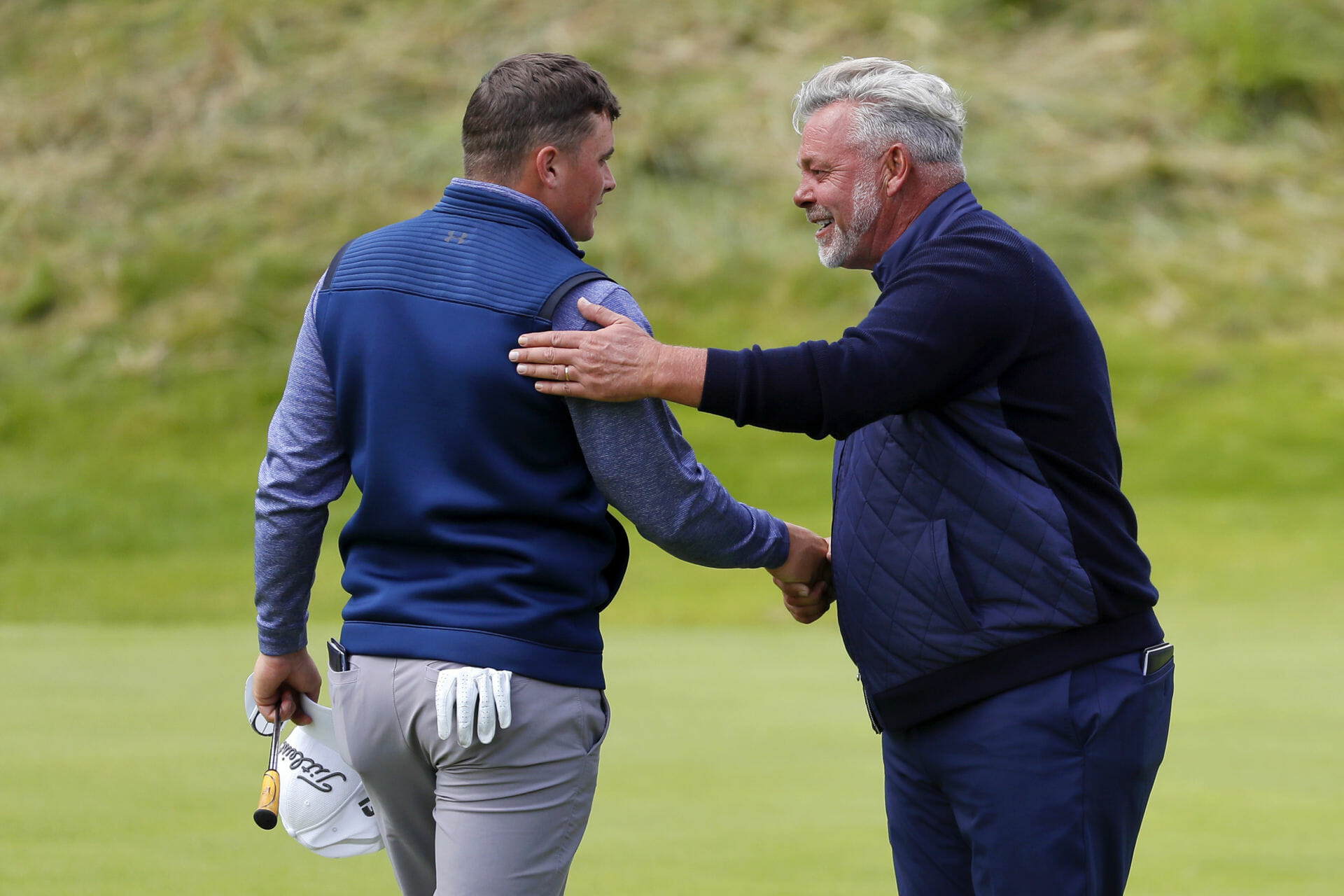 Darren Clarke was full of praise for playing partner James Sugrue after the veteran golfer signed for the same score as the Mallow man, an even par 71 on the opening day of the Open Championship at Royal Portrush.

The Dungannon favourite got the 148th edition of the tournament underway with a nerveless birdie amid wild scenes at the par-4 first and with a familiar face for company, the 2011 Champion Golfer enjoyed the walk thereafter, playing some fine golf in between.

“Yeah, we talked all the way around,” said a smiling Clarke. “He played really nicely. He was really good. I was egging him on and keeping it going.

“Amazing to think, I said to him on the 7th tee, I said; ‘this is something that just came into my head, James. I don’t know if this is good or bad. You come through my Darren Clarke Foundation, and on the 7th tee I’m leading and you’re second. There’s something not quite right about that!’ We had a right good laugh and chuckle about that.

For a good chunk of his opening effort, Clarke found his name sitting proudly atop the board and but for a momentum killer at the par-5 seventh, where Clarke skidded his approach shot into an unplayable lie wide right, it could have been even better.

“I just got a little bit carried away,” said Clarke who was cruising at three-under par through six holes at the time.

“[I] Hit a beautiful drive and then I tried to hit a 4-iron for the second shot and just got ahead of it and hit it a bit right. I had to take a penalty drop. That was one of those stupid ones. It wasn’t that far right, I was trying to move it in this way. I picked the wrong one and paid a penalty for doing that.”

“The first six holes I was really enjoying them and playing with a little bit of freedom, then after I made that bogey I got a little bit defensive, almost. I was trying to not make mistakes, as opposed to playing a little bit better.

“And then I’d have spells where I’d hit a couple lovely shots and make birdies and do some stupid things and make bogeys. I guess that comes with being 50!”

Yet even at 50, Clarke found himself surprised as a wave of emotion met him at the first tee at Royal Portrush. Given all he’s seen before, from Ryder Cups to a Major win, the Champions Tour star wasn’t expecting to feel overhwelmed at the first tee, but even the wily veteran found himself performing a double take given the reception he received at 6.35am.

“It was interesting,” added Clarke. “Obviously I’ve had lots of Ryder Cup shots and all that sort of stuff. But that was pretty much up there. I didn’t think I’d feel the way I did. But the support, everything from the crowds, just everything about it sort of, when I was about to hit my tee shot, [I thought] ‘wow, it’s The Open Championship, we’re back in Portrush’. It was amazing.”

Unfortunately the day wasn’t so amazing for three-time Major winner, Padraig Harrington who’d started brightly this morning. A couple under through the first five holes, a bogey at six saw the floodgates open to four more before a birdie at his penultimate hole was cancelled out by another dropped shot at the last.

In the end, Harrington signed for a four-over par 75 leaving him with plenty of work to do tomorrow.