Brendan Lawlor fired the round of the tournament to brilliantly capture the inaugural EDGA Scottish Open title at the Renaissance Club.

Playing alongside the stars of the European Tour, the Dundalk amateur wasn’t one bit fazed by the occasion, firing a superb four birdies in an even par effort on Sunday.

Lawlor, who was ranked third in the world before this week, plays off a one-handicap despite being born with Ellis-Van Creveld Syndrome, a bone growth disorder that leads to shorter limbs but his clutch par down the last to grasp the win was the epitome of the man.

The Dundalk man was brilliant on the front nine, birdieing the fourth, fifth and seventh to lead by one at turn despite dropping a shot on the ninth.

Groves – who has a paralysis of the left arm called Erb’s Palsy – made gains of his own on the first and seventh but dropped shots on the second, third, sixth and eighth, and further bogeys on the tenth and 11th left the Englishman two behind, with Lawlor also bogeying the 11th. Lawlor then dropped a shot on the 13th but moved back two ahead as he picked it straight back up on the next.

A bogey on the 17th then set up a tense finish but Groves parred his final seven holes to leave Lawlor holding the trophy.

“I’m absolutely thrilled to win.” Said Lawlor after his round.

“I played well yesterday, I know I shot 6 over but I struck it better than that and just never holed the putts, thankfully they dropped today and I putted very well.” 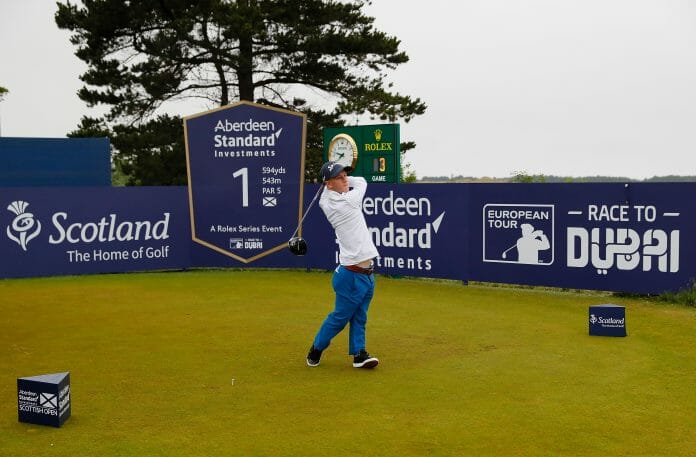 The 4’ 11” swinger was the only disabled golfer who managed to shoot a par or better round over the course of the 36-hole tournament with his plus-six tally good enough to beat world number one, George Groves into second spot by a single stroke.

“I wasn’t in the final group so I felt the attention was off me a little and I could just go about my business. It was good for me as both lads in the final group were probably trying to beat each other and when I got off to the good start it put the pressure on them. It was an unbelievable experience and I am so happy to get the win.”

“I knew I could get out there today and put a score in and try and put pressure on the leaders and I’m glad I did. I got off to a great start and was -3 through eight, it’s actually the first time I have ever won coming from behind so I am very happy with that too.”

The event was played off the full Sunday layout in Scotland but the calm conditions played into the Dundalk mans hands.

“It was an absolute animal of a course to play off the pro tees but with the warm weather the ball was actually travelling 20 – 30 yards further than yesterday. I was still hitting 3 and 4 irons into every par 4, it was tough. Especially when you see the pros hitting wedges into them.”

Lawlor will now take a few weeks off and get back to his day job where he works in his dads family business. The EDGA Scottish Open is the first of two disability championships scheduled alongside Rolex Series events on the 2019 Race to Dubai, with the 36 hole EDGA Dubai Finale due to feature as part of the season ending DP World Tour Championship, Dubai at Jumeirah Golf Estates in November.

“It’s been a hectic few months playing the EDGA events so my next event will possibly be late Aug or September and then off to Dubai in November for the event that is part of the Race to Dubai on the European Tour and then Australia.”

Far from allowing his disability to get in the way of his golf swing, the proud Irishman continues to defy the odds with his continuous string of consistent performances which he hopes will get him to world number 1 soon.

“This is one of the biggest EDGA events ever held and the first one in the UK & Ireland so I am hoping the win gets me close to world number 1 , it should be close. Its going in the right direction anyway so i am delighted.”

From all at Irish Golfer, well done Brendan.