Cormac Sharvin will lead the home charge into the final day at the Dubai Duty Free Irish Open in Lahinch.

The Ardglass man who required a sponsor’s invite to tee it up this week, has seized his opportunity with both hands, following his opening rounds of 66 and 69 with a superb moving day 66 which left him on nine-under for the tournament, just four off the lead in a tie for seventh.

With so much at stake, world ranking points, Rolex Series prize money, an Irish Open title and a possible Open Championship start, Sunday is set to be the biggest test the 26-year-old has faced in his short professional career  and Sharvin seems to be thriving on the home crowd atmosphere.

“I’m delighted. It was a good day,” admitted Sharvin after his round. “The crowds were amazing and I fed off them pretty well. I hit the chip on 18 and said to my caddie, the hairs are standing on the back of my neck here. It was nice to putt on a bit of a show here today.”

“I felt really comfortable today. Early doors I was quite nervous but after two or three holes, I settled into a good round and hit a fair enough tee shot down 2 and didn’t miss a shot after that. I seemed to settle down pretty early and I played really nicely out there.

Playing for such big stakes, not just in this tournament but possible qualification for Portrush Sharvin remains unfazed.

“I think there’s big stakes every time you take it up, especially in my position playing on The Challenge Tour. I’m having to go to strange places every week. Every tournament’s an opportunity for me, and I’m trying to take my opportunities as much as I can.

I’m playing well so just going to keep doing what I’m doing and stick to my process and take it one shot at a time and see where that takes me.”

Next of the Irish is Robin Dawson as he produced a blistering six-under par round of 64 today at Lahinch. Playing in his first Irish Open as a professional, the Tramore golfer was a late addition to the field this week and he’s taking full advantage having burst up the board into a tie for 6th at seven-under par.

With conditions scorable, the 23-year old may slip back as the day progresses but his flawless six birdie salvo has at least put him in the picture heading into Sunday’s final round.

“It was a nice round of golf,” said Dawson. “It was lovely and calm there the first 12 holes and then rain started coming down, so I took advantage of the first 12 holes or so. Just played pretty solid all day, just getting nice numbers and giving myself a lot of chances for birdie.”

“I didn’t really have any to be honest,” added Dawson when asked of his expectations this week. “I kind of got a call on Monday to say I was in the field, last minute invite, so I was lucky, so I kind of just rushed here, had a quick practice round.”

There’s plenty on offer aside from the title for the Challenge Tour pro this week too with three qualifying spots for the Open top of the list. Just last week when Dawson was struggling to a Sunday 77 at the Italian Challenge, such thoughts were a distant dream but it’s a realistic goal now, although not one the towering fledgling pro wants to get lost in. 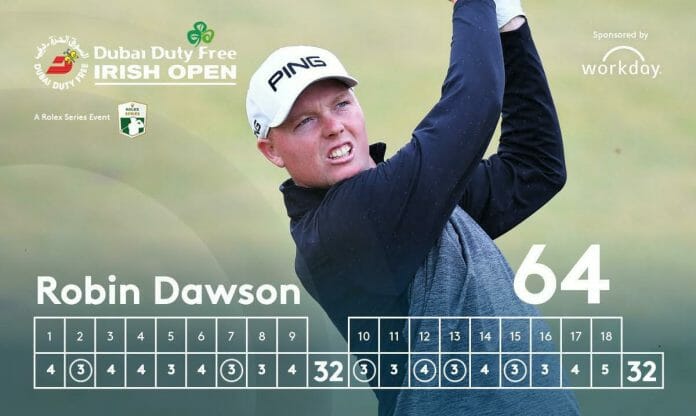 “I suppose it’s going to be in there somewhere in the back of my mind, but if I play well, all looks after itself. When I’m on the course, I’m kind of in my own little world, but yeah, you do think about it, of course you do. But when I’m on the course, no, I just have good fun with my caddie, Peter O’Keeffe, so keep on doing that.

“It’s nice to be playing here at Lahinch. I know the golf course, so there’s comfort in that, as well. But yeah, of course there is, professional golf, there is going to be up-and-downs and I’ll be prepared for that and take whatever comes on the chin

“I’m going to enjoy the lie-in first. It was an early start this morning. I think it was like 5.00 alarm, so I’ll look forward to a lie-in in the morning.”

At the top Robert Rock carded a breath-taking, record breaking 60 in front of capacity crowds at Lahinch Golf Club to take a one-shot lead into the final round.

The 42-year-old birdied his final six holes, which included a 35-foot putt for eagle on the last for the second 59 in European Tour history. After missing by mere inches on the low side, Rock sits on top of the leaderboard at 13 under par, one clear of Spaniard Rafa Cabrera Bello and England’s Eddie Pepperell.

South African Zander Lombard was then at 11 under, with England’s Andy Sullivan and Austrian Bernd Wiesberger three shots off the lead. Of the other Irish Shane Lowry is in a tie for 41st at -2, with Padraig Harrington and Seamus Power a further shot back on -1 in a tie for 50th.