As close as it gets to playing an Open Championship 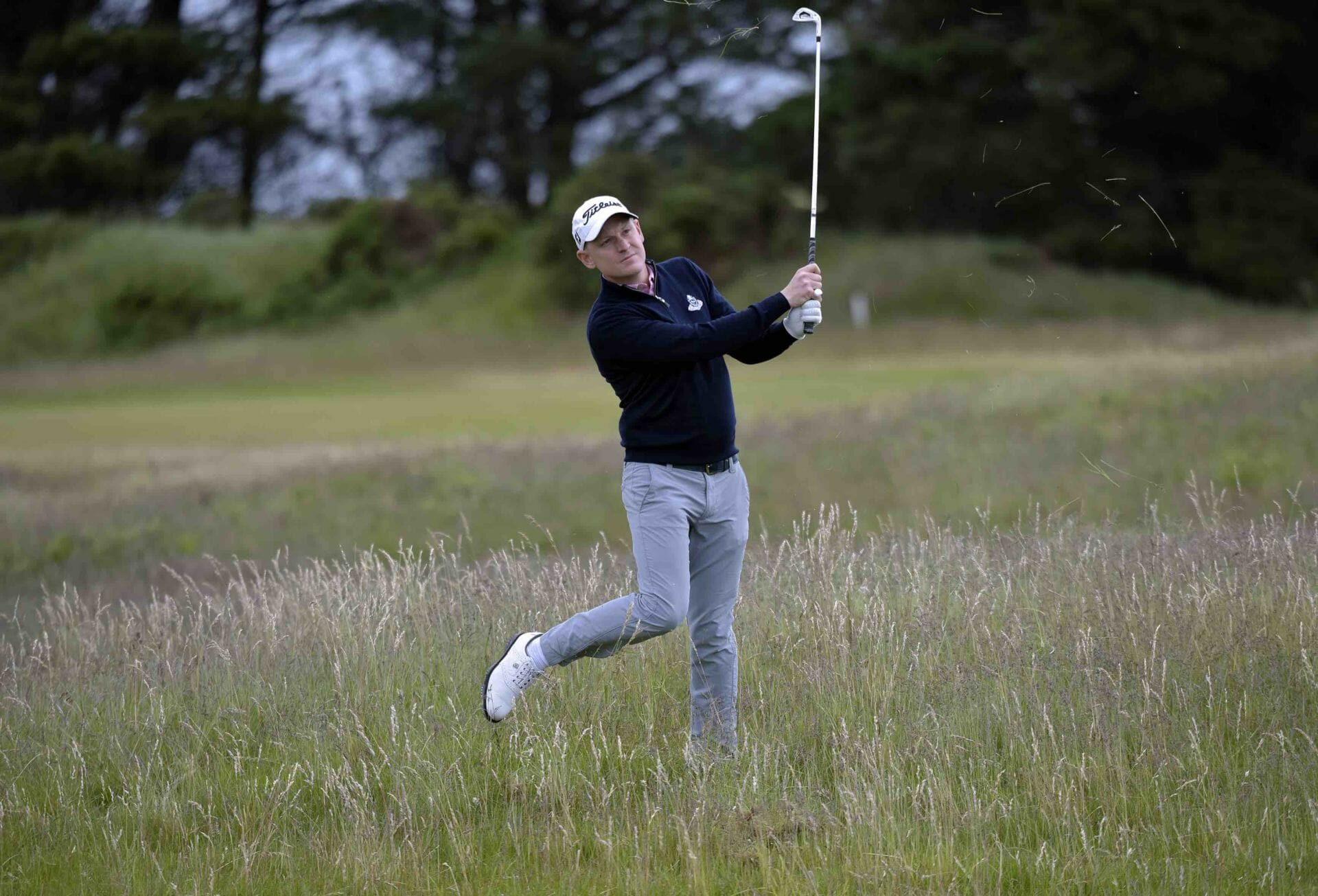 After a restless night, his round got off to a shaky start. Poised to hit the opening shot at Portmarnock, Geoff Lenehan backed off. Suddenly it was too real. The tension of teeing off first in The Amateur Championship caused his leg to tremble.

“It was a weird situation,” Lenehan explained. “I guess I’ve been thinking about the [opening] tee shot for a while, whether it’s a driver or a hybrid and where to hit it. We put in a lot of rough over the left bunker so I know you can’t go left and obviously the sea is on your right so you can’t go there. Then you get up and all your friends are there, your parents are there – it’s different than anything else I’ve felt on the tee.”

For a moment, hitting a golf shot seemed like the most unnatural thing in the world to him. Mind and body had already been disturbed by lack of sleep. To play at this hour, 7am, meant breakfast before dawn. He travelled to the links like a man who had spent his night preparing for an early flight.

Settled, Lenehan addressed the ball again and safely dispatched his drive down the first.

‘What was the fuss about?’ he wondered, walking down the fairway.

Among the 288 players in the field for this year’s championship, Lenehan holds some rare distinctions. A member of Portmarnock, joint hosts of The 124th Amateur Championship along with The Island, the 31-year old has been central to preparations. He has worked on the Links Committee at his home club for the past two years, watching how this championship unfolds behind the scenes.

“We’ve been building towards this and putting measures in place to get the course ready,” he stated. “We’ve been looking at everything from the practice facilities to the new bunkers to conditioning of the course. It’s been a long, long run in to this for me.”

Along with Conor Purcell – the world number 17 – and James Fox, Lenehan also carries the not insignificant hopes of his club.

“There is a pressure in Portmarnock,” he admitted. “It’s a good pressure. They expect you to play well because they’re rooting for you and they rate you. You don’t want to let those people down either.”

To be surrounded by supporters is no bad thing but the best of intentions can nurture the strangest of notions: “It’s one thing preparing the setup for a championship. Then I have to get my head around the fact that I have to actually play well in it. Then I’m going, ‘What if I play terrible? What if I shoot 85?’ I’ll look a fool.”

The weight of such worries often occasion weird happenings, even to sensible players. From a promising position down the first, Lenehan committed a cardinal sin, sending his second shot over the green. The six, a double bogey that resulted, could hardly be comprehended.

“How many times have I made par there?” he mused. “Why didn’t I just dink one on to the front. I tried to play the perfect shot.”

On his way to the second, Lenehan felt stupid but he did not let emotion run riot. He has been coming here too long to let one bad hole ruin a round.

When Geoff Lenehan joined the club as a Junior in the year 2000, he made his way by rail and on foot. Old fashioned as it sounds, taking a train was his only option. At Monkstown Station, near home on Dublin’s southside, he would get the Dart. Alighted in Portmarnock, the golf bag on his back, he still faced a forty-minute walk to reach the course.

On the return leg, Lenehan hoped to meet a kind soul: “I’d try to catch a Southsider who’d take pity and bring me home.”

This year marks the club’s 125th anniversary. Lenehan’s earliest memory takes him back to 1997 when Portmarnock hosted the European Amateur Team Championship.

“Noel Fox was playing for Ireland,” Lenehan recalled. “Noel played foursomes with Jody Fanagan against Henrik Stenson. I was eight at the time. Portmarnock was a big scary place. Big hallways, lots of old photos on the walls, lots of well dressed members. I probably didn’t quite appreciate it.”

Fox, the poster boy for Portmarnock, had a supreme gift for the game. He held younger players in thrall and Lenehan was an acolyte.

“Noel was our hero,” said Lenehan. “We were scared to go talk to him. I remember when he made the Walker Cup in ’03 how excited everyone was in the club. It was a huge deal.”

In recent years, Lenehan has assumed an elevated status within the club, a place where competition is intense. Any player who can hold his nerve to win a decisive Senior Cup match – as Lenehan did against Paul Cutler of Royal Portrush in the 2018 All Ireland final – is held in high esteem.

“There’s a very competitive spirit within the club and I mean that in a good way,” Lenehan stated. “People are genuinely interested in how your golf is, where you’re playing, and what teams you’re on whether that be Jimmy Bruen or Senior Cup.”

Over the last three years, The Amateur Championship has travelled from south west England to north east Scotland and across to Ireland’s capital city. Niall Goulding, Chairman of the Portmarnock Championship Committee, has followed the tournament from coast to coast, learning as he went, at Royal St George’s then at Royal Aberdeen.

“We have hosted other big events but we’ve never hosted an event with 288 competitors and another club hosting with us,” said Goulding. “It’s been terrific fun. It makes it very easy when there is a playbook there that we can work it but at the same time, we’ve been adding value where we can. We’re a proud club and a proud nation.”

Such passion is not unusual at Portmarnock. The course has that effect, even for those who play here every week.

“This course is really at the top level in this sport,” said Geoff Lenehan after his opening round on Monday. “It’s as close as you get to playing an Open Championship I think. Having been a competitive golfer for over 10 years and to now be playing this championship here is incredibly special for me.”

By then, Lenehan had struck the final blow in his opening 76. The numbers – seven pars, six bogeys, four birdies and that early double – told only part of the story.

“When you step back, 76 is okay here today,” Lenehan surmised. “We play our club championship off the back tees and if you shot 76 on a morning like that, you’d be doing alright. Just gotta try and knuckle down for The Island.”

Today brings a different challenge: the battle to make the cut. But at least he will have had some sleep by then. Rested and refreshed, his next round of golf will not be half as stressful. For all the highs and lows in round one, Lenehan will never have another Monday like it.