McIlroy drives his way to share of BMW lead 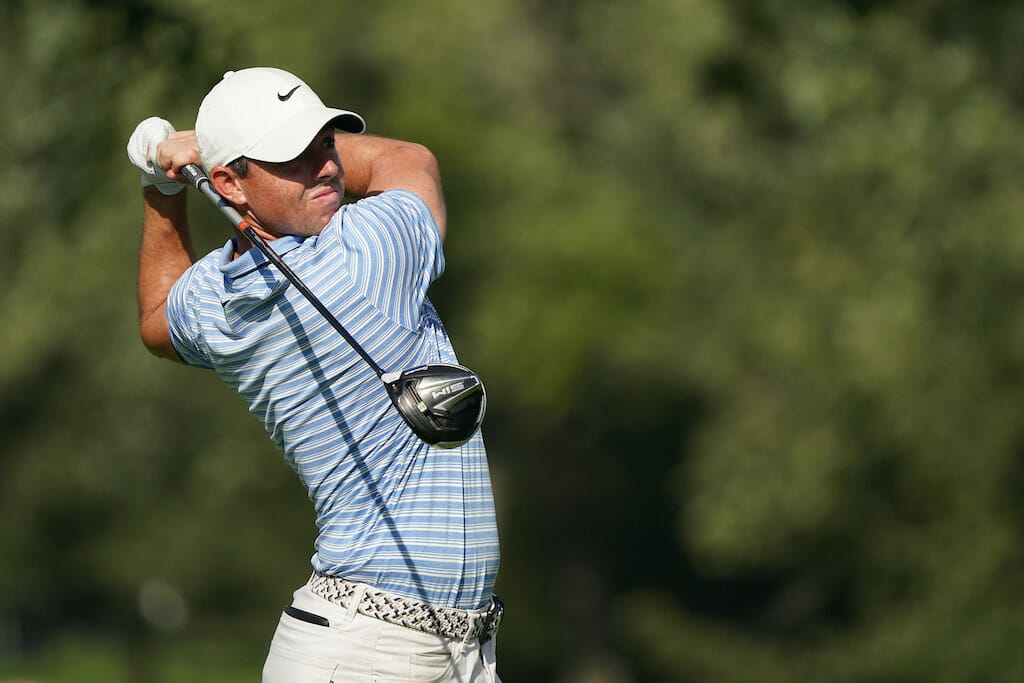 Rory McIlroy was singing the praises of a ‘new’ driver after being projected to head to his defence of next week’s Tour finale as No. 1 on the FedEx Cup standings in muscling his way to a share of the lead on day two of the BMW Championship in Chicago.

McIlroy seemingly has finally found his pre-Coronavirus lockdown form posting a hard-fought one-under 69 for a one-under tally in continuing heatwave conditions on the Olympia Fields course.

And helping lift his spirits enormously was the work he undertook earlier in the week to find a more user-friendly driver, even though McIlroy managed to hit just six of 14 fairways on day two of the event.

Yes, there was still visible frustration in missing a handful of birdie and also par putts but in the bigger picture, McIlroy heads to the weekend rounds of the penultimate event of the 2019/20 a long overdue genuine threat to his rivals.

Those rivals include fellow late round two leader American Patrick Cantlay (68) with first round leader, Hideki Matsuyama of Japan at even par.

World and FedEx No. 1 Dustin Johnson was one of those finding it tougher than last week’s birdie feast at TPC Boston but he’s now just one beside at even par after posting a one-under 69 on Friday.

Meanwhile McIlroy, looking still for a first taste of success in 2020, continued his fondness for Olympia Fields located south of the Windy City.

Once again, the tightness of the course, where you have to ‘pick’ your way about the lay-out, has McIlroy, currently a lowly No. 11 on the FedEx Cup points table, finally chomping on the bit, this despite three bogeys over his inward nine.

“It was better today and it’s been better these two days as I think I have gained a shot-and-a-half on the field off the tee yesterday,” he said.

“I don’t know what it was today but I hit some really good drives which is a lot different from the last two weeks where I lost strokes on the field with my driver last week and also at the PGA Championship.

“So, I went home last Sunday night and tested different drivers, different set-ups and different heads and shafts, and actually managed to decide on a driver I used back in Connecticut for the Travellers and it’s worked really well, so far.

“I also made some comments last week where I found it hard to focus and concentrate but when you are presented with a set-up like the course like this then you have no other choice as you have to focus, you have to concentrate, and you have to think about every single shot.”

Starting from the 10th, McIlroy launched a booming 328-yard drive at the 11th hole landing just short of the green before holing an eight-footer for a birdie ‘3’.

McIlroy was just six-feet from the flag at the par-3 13th to move to two-under and while he dropped a shot at the next, he then produced the first piece of brilliance in his round when he holed a 40-footer from the apron for birdie at the par-3 16th.

Then for a first occasion since capturing victory in last November’s WGC – HSBC Champions in Shanghai, McIlroy went into the lead in a tournament when he two-putted for a birdie ‘4’ at the par-5 first hole, the 10th of his round.

McIlroy’s remaining eight holes sadly was a mix of three bogeys and just the one birdie at the par-3 fourth hole where he holed another six-footer.

The news is not good for Tiger Woods followers with the 15-time Major winner in a share of 55th at eight-over par after rounds of 73 and 75 left him needing a miracle to force his way into the Tour Championship at East Lake.