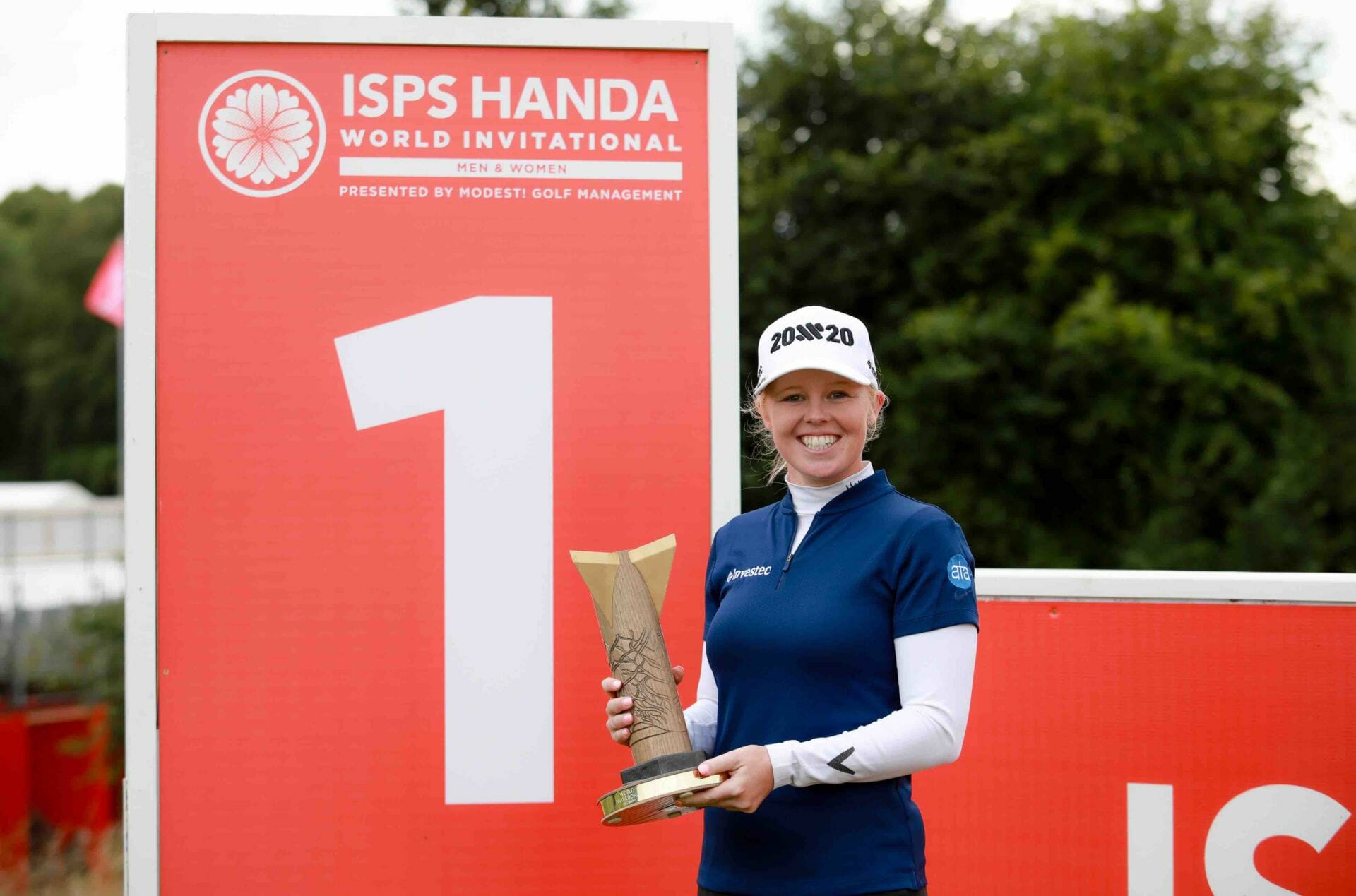 Meadow opened the day with a four shot lead and battled to a level par final round which left her a one shot cushion over Charley Hull (ENG).

Hull, who will represent Europe at the Solheim Cup in Gleneagles next month, put in a strong finish and was nine-under par over the weekend to ultimately put the most pressure on Meadow’s bid for a third professional win.

With victories on the Symetra Tour and Cactus Tour under her belt, the victory marks Meadow’s first on this side of the Atlantic since she won the Women’s Amateur in 2012. Winning in front of a home crowd, and with her boyfriend Kyle Kallen on the bag, is particularly special but brings its own level of pressure.

“I’ll tell you what, when Charley hit that 3 wood into 6 feet on the last, my heart was pounding. I just didn’t want to let it go. I’d been in the lead all day and I knew a lot of people were supporting me. I didn’t want to let anyone down,” said Meadow.

Meadow’s birdie putt slid past the target on the 18th green and Hull had an eagle putt to force a play-off, but when she was unable to do so, victory went to the local favourite.

“It’s so special to be given the opportunity to play at home and now to win at home, I’d like to thank ISPS Handa and Modest! Golf for that. I have some work to do to retain my LPGA Tour card so I am going to take confidence from this for the rest of the season back in the States,” Meadow added.

Cormac Sharvin was the sole Irish male player to make the second cut on Saturday night and with high expectations given his recent form, he may be disappointed with a T21 finish on 2-under. He can be consoled perhaps by the fact that he receives the Bridgestone Award for the best Irish player under 30 alongside Leona Maguire in the Women’s event, with Maguire finishing tied for 6th place with three rounds of 71 and a 73 to finish.

The leading Amateur awards went to Jayden Trey Schaper (SA) and Ireland’s Lauren Walsh (Castlewarden), who said; “It’s been a brilliant week ‘I played really well out there today, I was just enjoying it. I did take a double on 17 which was a bit of a blow but it was nice to birdie the last and finish 4-under.”

The 18-year-old will travel to Wake Forest University tomorrow morning to begin her Freshman year and a career in NCAA Division 1 Golf.

“I’ll take a lot of confidence going into the college golf I play in the next few months. Knowing I can hang in there when it matters is nice. It’s been some week. I’ll be sitting on the plane tomorrow trying to work out what’s just happened,” said Walsh laughing.

Overall feedback on the event’s unique format has been hugely positive. The Modest! Golf team, who began managing this event as the Northern Ireland Open, plan to grow the event even further.

“It’s great to have another professional event here in Northern Ireland so shortly after The Open at Royal Portrush,” said Modest! Golf director Mark McDonnell. “This has been a new event with a new message and we were so happy to have over 100 women here from 50 different countries this week. It’s been a special event and I think it will leave a legacy for golf.”

“I am a huge fan of golf, I watch a lot of golf and enjoy watching women’s golf,” commented Modest! Golf owner Niall Horan. “It was very important for us to ensure equal pay for the women as ultimately it’s what they deserve.”

There is no doubt that events of this format work, and should become the norm worldwide.