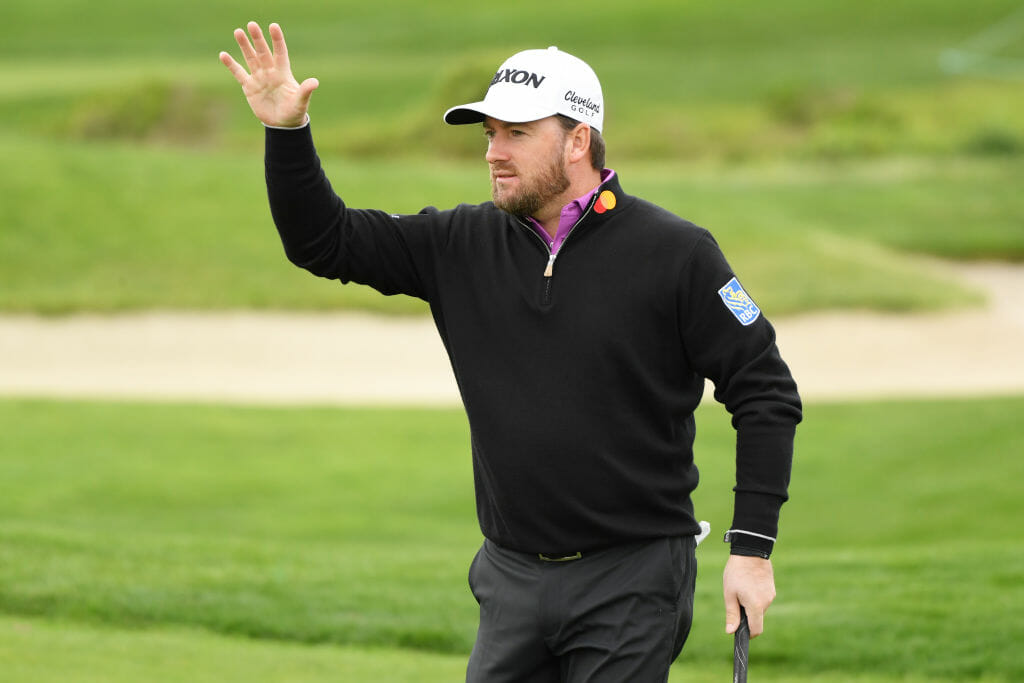 Graeme McDowell might now be suggesting, ‘Beware the injured golfer’ after a second straight inspiring effort on day two of the AT&T Pebble Beach Pro-Am.

McDowell added a one-under par 70 in tougher second round conditions to Thursday’s opening four-under par 68 to be at five-under in total and just outside the top-20 in his opening event of 2019.

Indeed, McDowell is just five shots from the lead held by five players – England’s Paul Casey (64) who partnered McDowell for the two rounds, and the Americans Phil Mickelson (68), Lucas Glover (66), Scott Langley (69) and Jordan Spieth who still has two holes left to play after play was suspended when a severe storm arrived late in the day with officials deciding to suspend the round that left some 44 players still to complete their second rounds.

Casey, a former Irish Open winner, and McDowell were fortunate to end their rounds at the Monterey Peninsula course moments before the siren sounded..

McDowell continued to tee-up with his left wrist heavily strapped, the legacy of bruising his lunate bone during practice over the New Year, and with the injury forcing McDowell to decline two event invitations last month.

And the Ulsterman, who admits he’s only 80% fit, continued to defy his lack of competition and after bogeying his final hole on Thursday at Pebble Beach McDowell regained the dropped shot at his very next hole on day two at nearby Monterey Peninsula course.

‘G Mac’, starting from the 10th, birdied his opener and then dropped a shot at the 13th but quickly made amends with birdies at the 14th and 16th holes and headed to the turn at six-under par in total.

McDowell then rattled off six straight pars before dropping a second shot of his round at the seventh hole or the 16th of his round before a pair of closing pars.

Helping to inspire the Ulsterman was Paul Casey, with the Englishman storming his way to a share of the lead at 10-under par thanks to a sizzling seven-under par 64.

Casey started the round at three-under but was nine-under at the turn thanks to an eagle and four birdies.

Casey, 41 and chasing a third PGA Tour triumph, cut a swath through the field jumping nearly 30 spots thanks his score of 64 and the Phoenix-based Brit completed his outward half sandwiching a seventh-hole eagle among four birdies from his third to ninth holes.

Casey then posted a 15th hole birdie among eight homeward pars and managed to complete his day moments before a siren sounded to halt play due to adverse weather conditions.

“I played a great round of golf and I’m so happy to get done,” he said. “We were on the last hole and I heard that horn go. And then there was a second one and then a third one which means, and I had to think for a minute, because you get one long blast, you’re done.”

McDowell and Casey were clearly enjoying each other’s company with the duo catching-up for a first time since last September’s Ryder Cup.

Shane Lowry, the only other Irish golfer in the field and competing in the States for a first time in six months, is heading towards missing Saturday’s third round cut after a horror bogey-laden 77 at Pebble Beach to just inside the top-130 at four-over par.