Rory McIlroy finds himself once again in familiar final round surrounds, this time heading to the last day in his first appearance at the Farmers Insurance Open at Torrey Pines.

McIlroy will tee-up on the South Course sharing sixth place at 11-under and seven shots adrift of victorious Ryder Cup team-mate, Justin Rose who continued to make somewhat of a mockery of packing a complete set of new and untried Japanese Honma clubs in his bag for the event by carding a round of 69 to remain three shots clear of his rivals for a 18-under par tally.

Rose grabbed a ninth-hole eagle along with six birdies but also posted two doubles in his round as well as a bogey at his last with the Englishman having won just once before in the first month of a new year in his 21-year pro career, that was in capturing the first of 23 worldwide victories at the 2002 Dunhill Championship in South Africa. Now Rose looks set to win for a 10th time on the PGA Tour.

“Yeah, obviously delighted with how I’m playing this week. Felt like I’ve kind of clicked into a nice little rhythm being quite focused. I think that really sort of worked on my mental sharpness I suppose from Palm Springs last week into this week,” said Rose.

Adam Scott celebrated Australia Day with a ‘best-round-of the-day’ 65 to muscle his way into second place at 15-under par with Spaniard Jon Rahm (68) third at 14-under.

Scott, competing in his first event of the New Year, began his round with a birdie at the first and then brilliantly holed a 103-yard wedge shot for eagle ‘2’ at the par-4 second hole.

Scott and Rose are the best of friends, with their friendship going back to 2000 when both players were competing on the European Tour but Scott knows that this Farmers Insurance Open is now Rose’s to lose.

“If Justin plays like this, he’s going to be very hard to catch because I thought shooting 7 under, maybe I could make up more than two today,” said Scott.

“I might not even make that many up. He seems to be in total control, so a lot of it’s on his golf at the moment. If I can just play another solid round, that would be good for me anyway; good for the confidence, get this season going and look forward to all the big events coming up.” 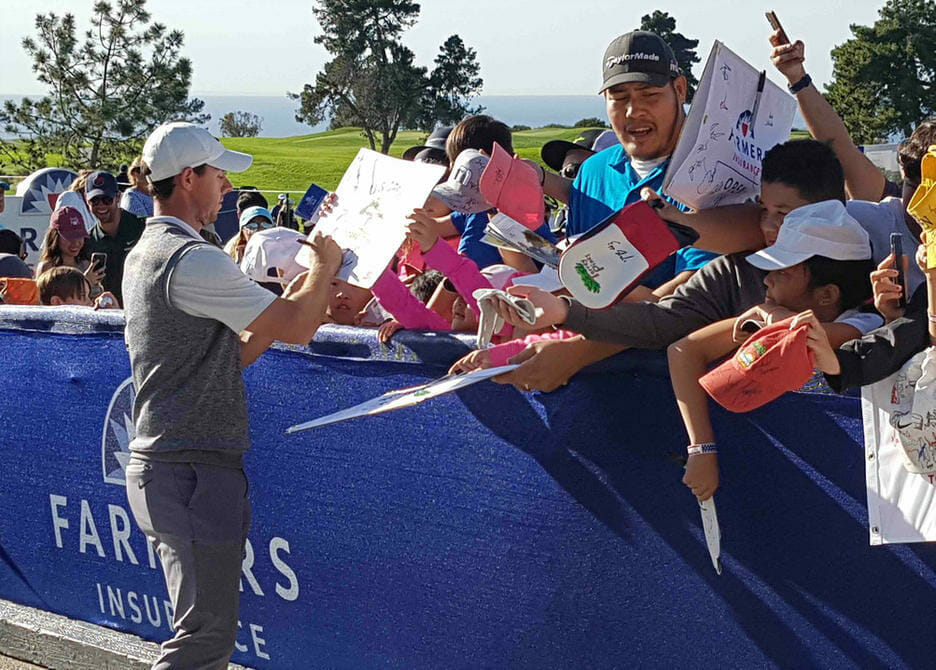 Yet again, McIlroy goes into a final round well inside the top-10 and staring at what would be in this case, a probably top-three finish at best.

“It’s aready been a really positive week,” he said. “You know, when I set the schedule at the start of the year, I wanted to play Hawaii for sure and L.A. I felt five weeks off in between those is a little too much, so I wanted to play somewhere and I’ve always liked the look of Torrey Pines. I just missed playing the U.S. Open here in 2008, so sort of between here and Phoenix and decided that I wanted to come here and play, and it’s been a great decision.”

“I got some good work in with TaylorMade at the start of the week and I’ve played some really good golf over the past three days, so really happy with this decision.”

And with the Ulsterman seven adrift of Rose but only four and three adrift respectively of Scott and Rahm, McIlroy will set his sights on a ‘hot start’ to the final day in the $7.4m event

“Right now obviously Adam’s a little closer to Justin than I am so I will ust trying to play for second place right now,” said McIlroy.

“Yes, it would be great if I were to get off to a hot start and get 2 or 3 behind with nine holes to play, but realistically if I go out and shoot a solid round of golf, shooting something in the 60s again, that’s all I can really do.”

“Some weeks you’ve just got to take your hat off to the guy who’s up there. Like Justin this week, he’s just played so much better than the rest of the field and sometimes you can’t do anything about that.”