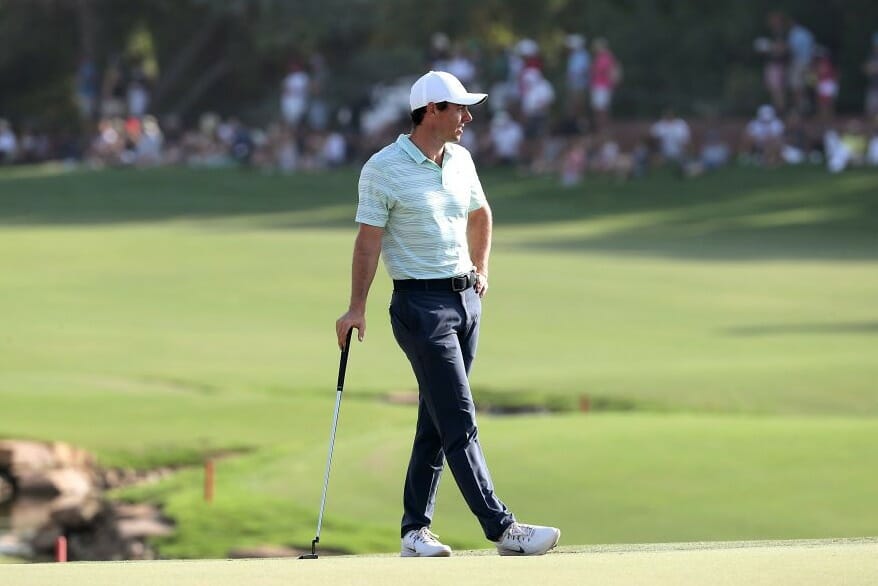 Paul McGinley, one of golf’s more highly-respective observers asks the question if Rory McIlroy can successfully ‘reinvent’ himself once he turns 30?

McGinley knows McIlroy and he knows McIlroy’s game better than anyone but the 2014 victorious European Ryder Cup captain and much-revered SKY Sports TV pundit is concerned McIlroy is making far too many mistakes over the course of a Sunday final round.

We’ve seen it far too often in recent years with McIlroy out in the last match on a Sunday, ala 2017 Dubai Desert Classic, 2018 Masters, 2018 Tour Championship and most-recently in the 2019 Sentry Tournament of Champions, snatching defeat from the jaws of victory.

Indeed, McIlroy has been in the last group on no fewer than eight occasions this past 12 months in both Europe and the PGA Tour.

“I don’t think there’s any doubt it has got into his head,’ said McGinley in an article appearing in the Sunday Mail.

“He’s making mistakes on Sundays he wouldn’t normally make if he was fully confident. But I saw a lot of him during the season opener in Hawaii recently, and liked what I saw.”

“Brad (Faxon – putting coach) helps with the mental side of putting and that’s what Rory needs; he’s at his best when he’s creative and not bogged down with technique.”

And McGinley, while still as surprised as most following McIlroy’s ‘European Tour’ comments in Dubai late last year, believes McIlroy turning 30 in May will prove to be a big turning point in the career of the four-time Major winner.

“I think it makes perfect sense to stay in America given what’s at stake when he gets to Augusta,” said McGinley.

“I know some people think he’s fallen behind the likes of Brooks Koepka and Justin Thomas, but if he wins the Masters he puts himself on a completely different level.”

“We’re at an interesting stage in Rory’s career as he’s almost 30, settled in America, he’s been at the top and got all the money he’ll ever want. Now, can he reinvent himself for when he’s in his thirties?” said McGinley

“That’s what the great players have done. Look at Tiger Woods. Can Rory find a way back to those days in the final round when he would have a walk of destiny right from the start?”

“We know he’s got the right stuff inside, but can he bring it out again? I’m hopeful, I must say.”

“As for his comments regarding the European Tour, I didn’t understand why he said it, to be honest. We can all see that America is the place to be if you’re a top 20 player in the world. Why wouldn’t you want to play there, with three of the four majors there and everything else?”

“I thought it was incredibly harsh but we don’t want to fall out with him. We all know him and like him, and he’s an important part of our tour. I know people keep saying there must be an agenda but if there is, I don’t know about it.”

“We hope he’ll stay being a member this year, and know he will be a member next year, because there’s no way he’ll miss a Ryder Cup.”

McIlroy returns to competiton at this week’s Farmers Insurance Open where he is making his debut appearance along the stunning clifftop course overlooking the Pacific Ocean and after the disappointment of Hawaii, McIlroy gets another opportunity to begin the New Year with a victory, something he has not achieved since capturing a second Dubai Desert Classic in 2015.