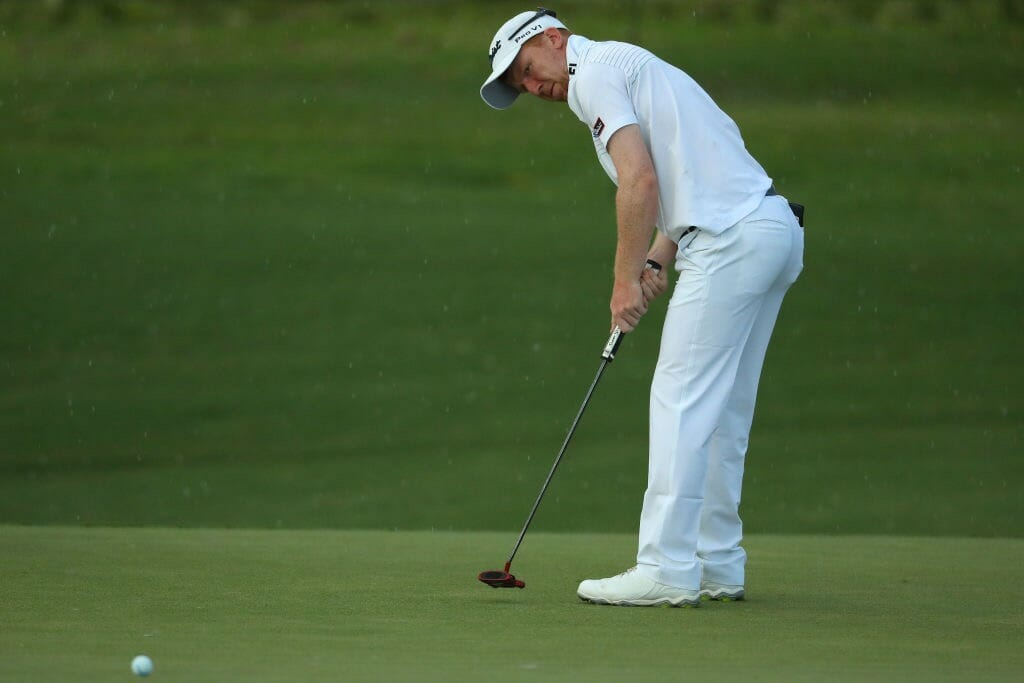 Gavin Moynihan looks like a man on a mission in Mauritius as he roared into contention on day two of the Afrasia Bank Mauritius Open at Anahita.

The Dubliner, who secured one of the last available tour cards at Q-School earlier this month, looks determined to avoid the slow-start that plagued his European Tour ambitions last season and he’s already going the right way about it.

The Mount Juliet professional’s ball-striking was typically strong in a superb seven-under-par round of 65 that included eight birdies.

The wide fairways and narrow greens at Four Seasons Golf Club seem to be playing to Moynihan’s strengths and now at 10-under-par for the tournament, he finds himself just four shots off the lead heading into the weekend.

“I played one of my better ball-striking rounds of the year,” he reflected. “I played lovely, holed a few nice putts. I played similar enough yesterday but just didn’t hole as many putts. Very happy.”

Indeed, the only hole that seems to be causing Moynihan any grief so far is the long par-3 8thwith Gavin determined to learn from two errors that have led to his only two dropped shots of the week to date.

“The eighth is a tough par three, 215 or 220, and I missed in the left bunker both days,” he recalled. “Tomorrow I’ll be trying to put it up the right somewhere. I just missed my par putt today but no complaints. I holed a few nice putts so it all evened out.

“It’s a very chilled week, almost a reward for getting through Q School. I’ll just enjoy the week but you have to play well, just freewheel it a bit. Obviously looking forward to the next few days.”

Meanwhile there was agony for experienced campaigner, Niall Turner who bogeyed the par-5 18th to miss the cut by one.

The tall Ballincollig native, who plied his trade mainly on the Asian Tour last season, looked to be cruising through to the weekend on three-under-par before two dropped shots in his last three holes scuppered his plans.

At the top, Kurt Kitayama produced a second successive round of 65 to open up a two-shot lead heading into the weekend at Anahita.
Qualifying School graduate Kitayama of the United States fired nine birdies on a hot and humid morning at Four Seasons Golf Club to get to 14-under-par, with a double bogey at the second the only blemish on his scorecard.

S Chikkarangappa is Kitayama’s closest challenger on 12-under-par, with the Indian recovering from back to back bogeys on his front nine thanks to a superb run of five birdies after the turn in his round of 68.

Frenchman Victor Perez, who matched Chikkarangappa’s round of 64 on Thursday, followed that up with a second round 69 to sit one shot further back, alongside his countryman Matthieu Pavon. Teeing off from the 10th, Pavon recovered from an opening bogey with an eagle on the 13th and a run of four birdies from the 18thin his round of 66.

Another Qualifying School graduate in Ireland’s Gavin Moynihan, who has only dropped two shots in the last two rounds – both at the par three eighth hole – is at 10 under par, with Trevor Fisher Jnr of South Africa one shot further back.