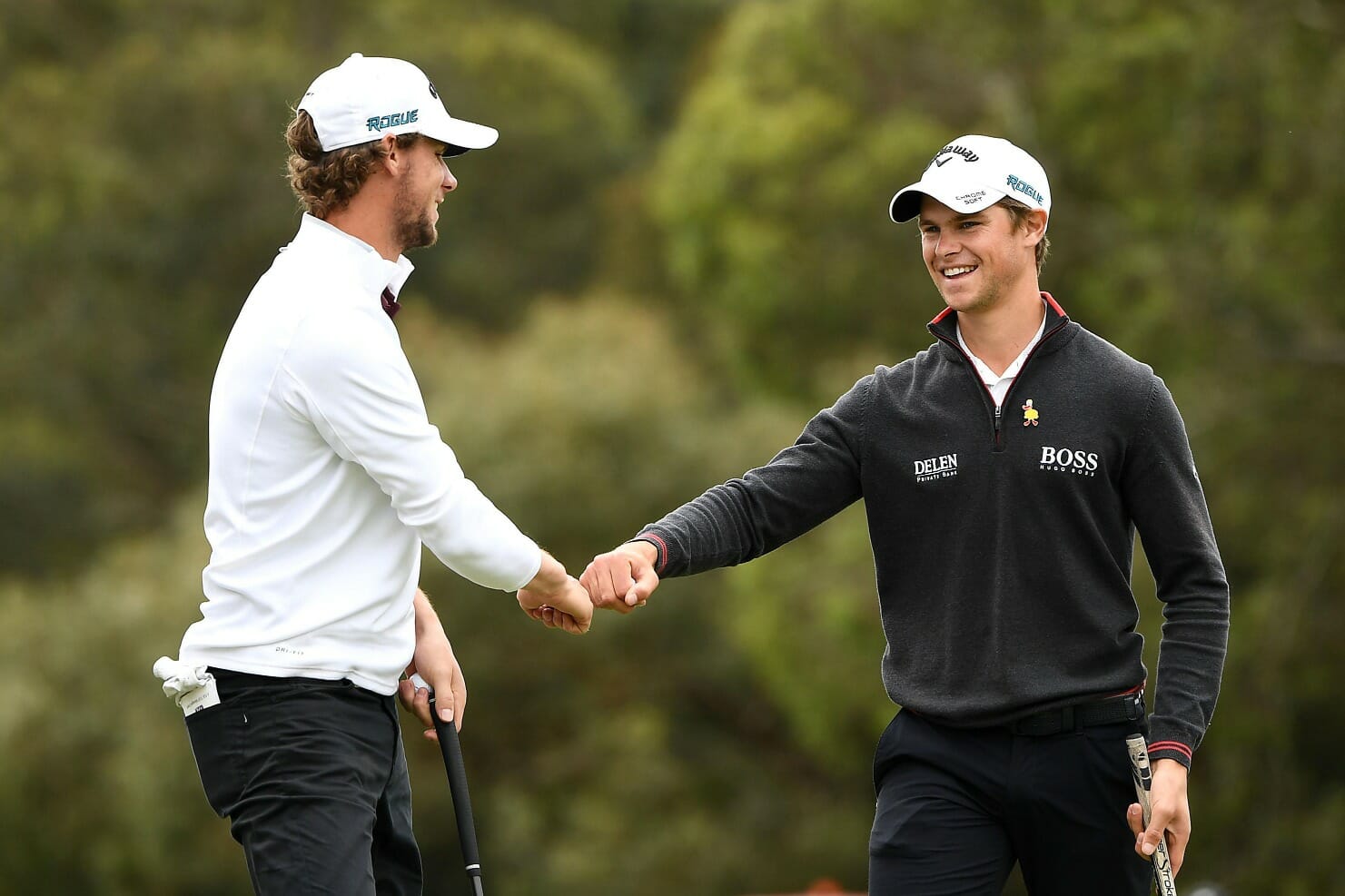 Paul Dunne and Shane Lowry carded a flawless seven birdie 65 on day three of the ISPS HANDA Melbourne World Cup of Golf but remain well off the lead heading into the final day.

The score moved the Irish duo up to a tie for eighth place on -11 but finished the day eight off the pace of the runaway leaders from Belgium.
Belgium carded a brilliant third-round 63 to open up a commanding five-shot lead heading into the final day in Melbourne.
Thomas Detry and Thomas Pieters entered day three at The Metropolitan Golf Club in a share of the lead but a Detry eagle on the ninth put them two ahead and they powered away on the back nine as the chasing pack faltered.

The duo were bogey-free in signing for a 63 in the opening fourballs and they repeated the trick on Saturday, sandwiching one of just four under-par rounds in the foursomes on day two to get to 19 under.
The Italian team of Andrea Pavan and Renato Paratore were at 14 under alongside South Korean pair Byeong-hun An and Si Woo Kim, and Mexican duo Abraham Ancer and Roberto Diaz.
England, Sweden and Australia were then six shots off the lead.

Belgium will be looking for their first World Cup win on Sunday and head into the final day’s foursomes as strong favourites with birdies at a premium in the alternate-shot format.
“It means a lot,” said Detry. “Walking up that first tee, when you see the trophy, it’s just unbelievable.
“You see all those names on there, you see pretty much all the countries and all the players that won that this tournament. It’s pretty amazing.”
Pieters added: “I haven’t hit it better than this all year, it’s nice. I kind of wish the season wasn’t ending now because I’m actually playing really good right now. Hopefully I can take that into next year.”

Home favourites Marc Leishman and Cameron Smith quickly reined in the overnight leaders as Leishman birdied the second from 20 feet and then made an eagle at the fourth from ten.
Smith got in on the act from 15 feet at the fifth and made a wonderful up-and-down from the sand on the seventh to hand his team the solo lead before another gain on the par-five ninth saw them turn in 30.
The Belgians made birdies on the gettable par-five fifth and seventh and when Pieters rolled a putt up the hill on the eighth, they were back in a share of the lead.
Pieters had done most of the heavy lifting up to that point but Detry emphatically joined the party at the ninth, holing an eagle putt from distance to vault his team two ahead.
Pieters put his approach to almost tap-in range on the tenth and when he got on the par-five 14th in two the lead was up to four.
Detry holed a 20-footer on the 15th and when he drove the green at the par-four 16th and got down in two putts, Belgium were in total control.

Italy had been their closest challengers for most of the day, following a birdie at the first with a long Paratore putt at the fourth, and sandwiching an excellent tee-shot on the par-three eighth with birdies on the seventh and ninth.
Pavan made a tap-in birdie on the tenth and while they picked up a shot on the 13th, a double-bogey on the next stalled momentum. They picked up further shots on the 16th and 17th but bogeyed the last.

Mexico made birdies on the fourth, seventh and ninth to turn in 33 and added another on the 12th before Ancer hit a brilliant approach into the 13th. An eight-foot putt on the 16th brought Ancer another birdie and a Diaz gain from 12 feet on the 17th kept them in touch.
An and Kim had made three birdies and a bogey on the front nine but registered six pars in a row on the back nine before An got on the front edge of the 16th green off the tee and holed a lengthy eagle putt before they finished bogey-birdie.
Alexander Björk and Joakim Lagergren made birdies on the second, third, seventh, ninth, tenth, 15th, 16th and 18th in a 64, while Australia managed one further bride on the 16th in a  65.
Tyrrell Hatton and Ian Poluter bogeyed the third but bounced back with gains on the fourth, seventh, ninth, 13th, 14th and last.