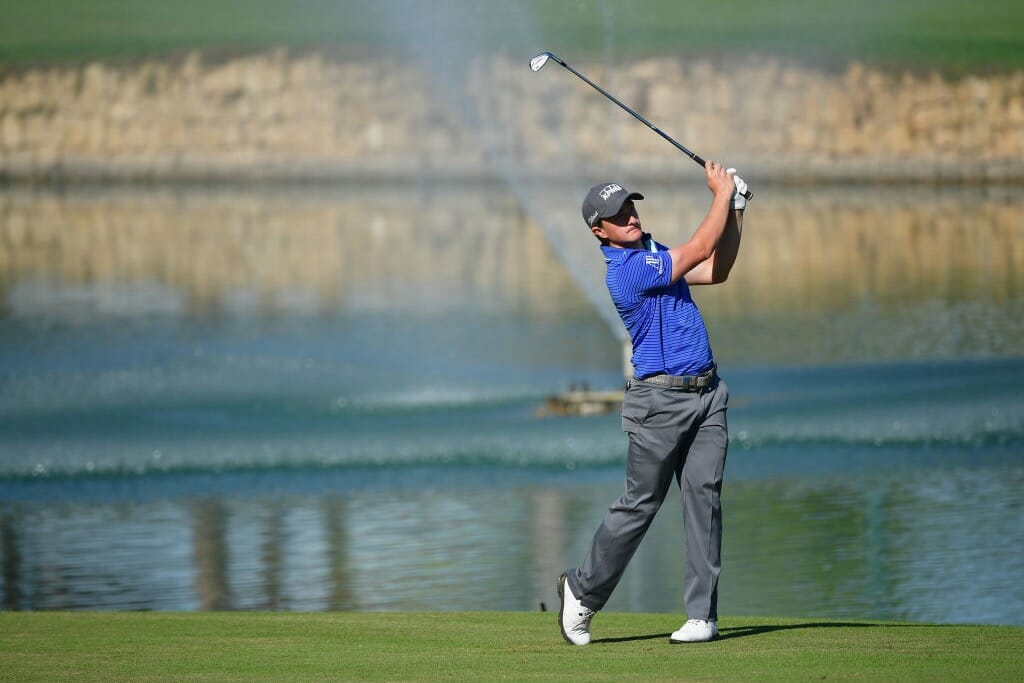 Greystones Paul Dunne boosted hopes of cementing his place in next month’s season-ending European Tour event with a bogey-free seven-under par 64 on the opening day of the Turkish Airlines Open in Belek.

Dunne, 25 began and ended his round with birdies to head the 78-player field by a shot in ideal scoring conditions on the Regnum Carya course.

Fellow Irishman Padraig Harrington along with defending champion, Justin Rose and Denmark’s Thorbjorn Olesen, who won the event two years ago, are just a shot further back after rounds of 65.

Dunne’s score is his lowest first round since a similar 64 on his professional debut at the 2015 Alfred Dunhill Links in Scotland while he closed with a blistering career-low 61 just over a year ago to deny Rory McIlroy in capturing the British Masters crown.

Dunne arrived in Turkey lying 54th on the Tour’s Race to Dubai but having managed just two top-10s in his 20 prior tournaments this year and needs to be inside the leading 60 at the close of next week’s Nedbank Challenge in South Africa to be assured of heading to the Dubai ‘Race’ decider.

“My iron play was pretty good today and that was the biggest thing I did out there well,” he said.

“On the three or four difficult tee shots I hit really good tee shots too, and apart from that, the ones I leaked a little bit were on holes you could get away with it and you could make birdie still from the rough.”

“That’s what I was pleased with, the holes I needed to hit a good shot on, I stepped up and hit a really straight one. I left a few putts short out there but I think we can always say that. A few short in the middle but I’ll take it.”

“To be honest, I just haven’t been hitting the ball very well. My putting is okay. Kind of drove it the same. Lost my iron play a little bit. Stopped giving myself chances, medium to short irons. Just scrambled for par for three months really. Nice to see a bit of form, post a good score and get a bogey-free round on the card.”

Meanwhile Harrington kick-started his round with three birdies in succession while he also birdied the fifth as the now 47-year old seeks to win for a first time since capturing the 2016 Portugal Masters.

“The birdies I made were all from pretty short distance starting with nothing more than 12-feet on four of my first five holes while I holed a couple of long ones near the end including that 25-footer on 17,” said Harrington.

Since returning to Europe in missing the cut at the PGA Championship Harrington has produced three top-10s in six events.

“Without a doubt, on more European‑style golf courses with slightly slower greens does make all the difference to my game,” he said.

“It gives me quite a bit of freedom on the greens and around the greens to get up‑and‑down.”

Justin Rose capped his round holing a 39-yard wedge shot for an eagle ‘2’ at the par-4 fourth hole and then managed four birdies also in a bogey-free round.

“I probably drove it better last year as I didn’t drive it particularly well today but my iron play was good,” said Rose.

“Holing out for eagle on No. 4 really got things going and I then made a birdie off the back of that and so 3-under through five, I felt like I was up and running.”

Victory this week along the shores of the Mediterranean would see the Englishman return to World No. 1.

Shane Lowry signed for a three-under par 68 to be sharing 20th place in the 78-player ‘no cut’ field.