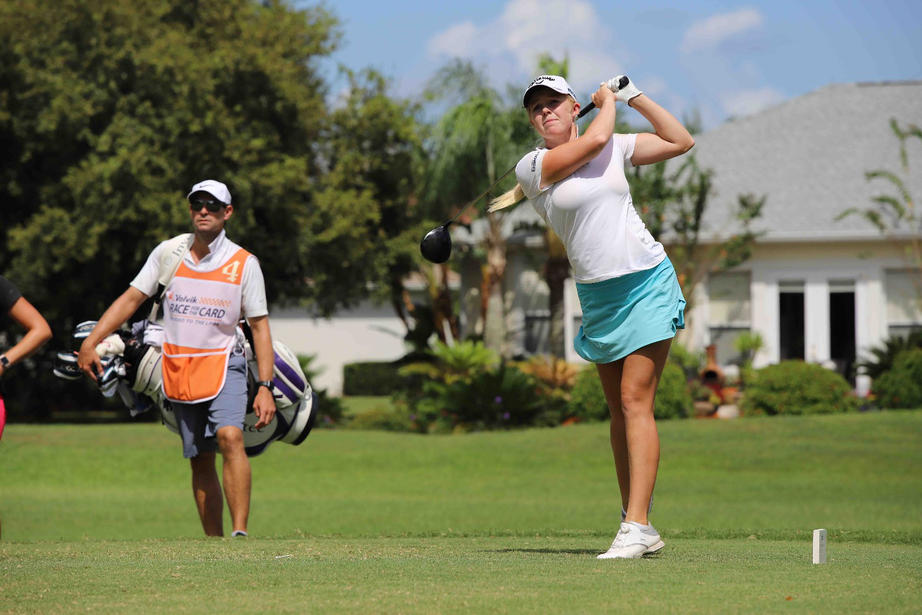 Stephanie Meadow is continuing right where she left off after qualifying for the LPGA Tour on the Volvik Race for the Card Order of Merit.

Meadow, who is in fourth place on the OoM as things stand, is guaranteed to be an LPGA player next season but it hasn’t dulled her focus as she added four birdies and one bogey in a second round of 69 at the final event of the season, The Tour Championship on the Jones Course at LPGA International, on the Symetra Tour.

Having been languishing down the leaderboard after round one she is now in T15 position on four under par and ready to challenge the leaders later today.

Leona Maguire didn’t have it all her own way on day two and her score of 75 saw her drop to two over par for the tournament and she missed the +1 cut mark.

At the head of proceedings Pavarisa Yoktuan (Nakhon Si Thammarat, Thailand) fired a 5-under par 67 in the second round to maintain the outright lead. Currently No. 7 in the Volvik Race for the Card, she takes a two-stroke advantage into the weekend at 15-under par overall.

“It was another good day for me and on the front nine I played the same as yesterday,” said Yoktuan, who went out in 4-under par 32 fashion. “On the back nine, I missed a lot of birdie chances, but still birdied the last hole. In total it was still really good.”

Her performance sets the Symetra Tour Championship 36-hole tournament scoring record and Yoktuan has now gone without a bogey or worse for 36 consecutive holes.

“I’ll keep my focus and do the same thing, maybe be more aggressive,” Yoktuan said. “I didn’t roll it bad, just barely missed it. I want to keep doing my best and of course, I’m on top of the leaderboard, but hopefully I can keep it going and it will do me good.”

Meanwhile, most recent Symetra Tour champion Ruixin Liu (Dalian, China) has kept Yoktuan within striking distance. She closed out her second round 5-under par 67 showing with a chip-in eagle on No. 18 and is only two back of the lead.

In a position to overtake the No. 1 position in the Volvik Race for the Card, as well as get her third win of the season, Liu is in the go zone.

“It’s the same as last week, when I don’t have that pressure I completely enjoy my time on the course,” said Liu. “She’s playing really good through two rounds, but I don’t want to think about how close I am. In this position, of course you want to go for the win, but if I don’t I will still be happy about things.”

A total of 62 players made the cut of even par in the 11th annual Symetra Tour Championship. Third round action begins at 8 a.m. ET in groups of three off No. 1 and No. 10 tees.

Elizabeth Szokol (Winnetka, Illinois) was the big winner on day two though as by making the cut at the Symetra Tour Championship,  she becomes the fifth player to secure a LPGA Tour card for 2019 as she will finish in the Volvik Race for the Card top-10.

“It’s so exciting, especially tough last year not earning my card,” said Szokol. “I learned a lot last year and this year, understanding my body with how much practice I need, the Pro-Am events and travel. I feel really good going into next year on the LPGA.”