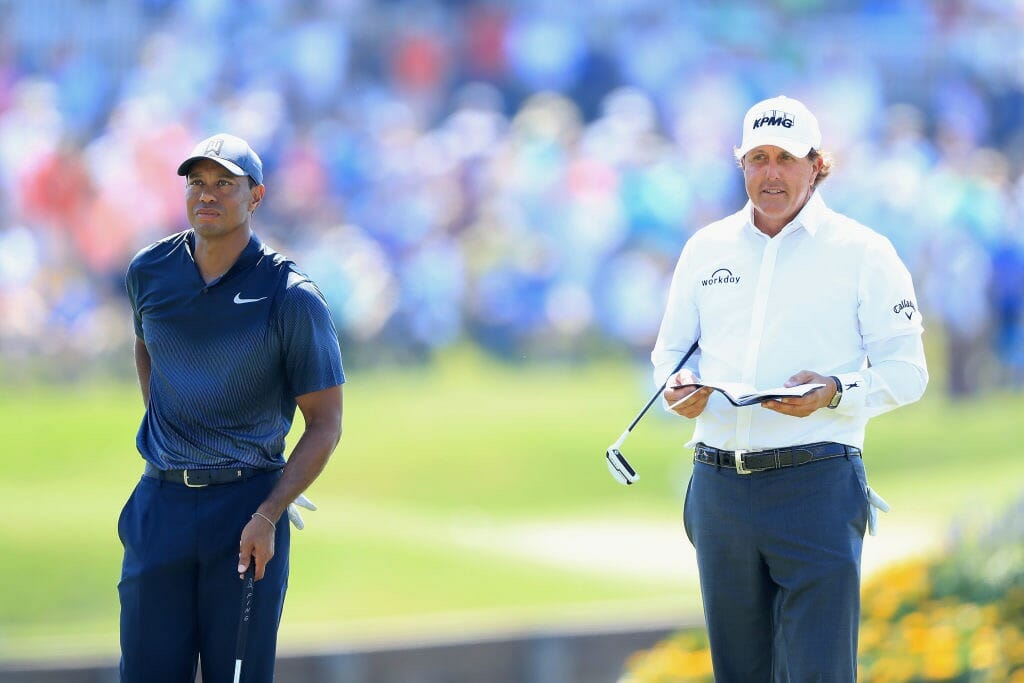 Every once in a while sport throws up something truly magical that makes us appreciate its ability to bring people together, no matter what colour or creed.

It can unite a people in witnessing a contest so pure and selflessly fought-out that it will make us re-evaluate our perspectives on life and reorder the things that we deem important. Its very happening can rejuvenate a region, flood it with much needed revenue and breathe new life into its people. Sometimes hundreds profit from its staging, often thousands, but even if it’s only two poor souls who reap the rewards of such a duel, at least that’s two people less to worry about in a line of so many.

I for one haven’t had a good night’s sleep in months worrying for the wellbeing of both Phil Mickelson and Tiger Woods, but with their proposed Vegas Shootout now a reality, confirmed for Thanksgiving weekend of all occasions, I can now finally lay my head to rest safe in the knowledge that two good men can too. Praise be the Lord!

Okay, so I don’t get it. Two of golf’s fiercest rivals for a time, the fire that once separated Tiger and Phil has well and truly been extinguished and yet a winner takes all $10 million Matchplay has been confirmed for November in Sin City. It looks set to be the second biggest heist in human history after the greatest boxer of a generation, Floyd Mayweather and a brash UFC fighter, Conor McGregor, played out the most lucrative one-sided spectacle the world has ever witnessed. Now we’re expected to fall for it again, this time with two players past their prime feigning rivalry to reap reward – Sin City an appropriate setting then…

But have the money men of golf not filled their pockets to the point of saturation already this season? Four Majors in the duffle bag along with multiple World Golf Championship prize pots and it’s only now that we’ve reached the Play-Off Series Cash Bonanza – there really is a wad of cash at every turn to cushion a professional’s fall.

Given the frequency of opportunity, the relentlessness of the dollar bills being flung at those taking part, it’s no wonder rivalry in the sport is so diluted; that the obsession with being the best has morphed into a satisfaction with being somewhere amongst them.

Which begs the question – what do Tiger Woods and Phil Mickelson have to gain from this event at all? Money they don’t need? Bragging rights that account for nothing in the grand scheme of their careers? Which makes me wonder even further; what do we have to gain from such an orchestrated contest?

Both players are going to be mic’d up I hear you say, their quick quips audible for all to hear, but you can’t just manufacture rivalry. I cringe at the thoughts of the rehearsed dribble that will spew from the mouths of both men.  As if a microphone on Woods is suddenly going to give the world an insight into the master of keeping cards close to the chest. It will be another Oscar worthy performance no doubt to rival that of his post sexcapades apology – the most contrived and scripted act of remorse seen since Father Jack Hackett expressed his sorrow to Bishop Brennan for spouting “arse biscuits” from his favourite scraggy chair.

And don’t be fooled, there’s nothing innovative about this either; such contests were used to promote the game when Player, Arnie and Jack would travel the world for sport. Sure, golf is faced with its challenges; participation numbers have never looked more threatened. But is this indulgent novelty act going to provide the catalyst that reengages golf with the people, or is the greed behind two men who’ve made their money going at it once more for cash only going to further divide golf and the every man?

My blood boiled when McGregor was handed a shot at Mayweather, an opportunity he scarcely deserved, and although I can rest easy knowing that the hype train behind this event will pale in comparison, I can’t help but feel its merit is just as lacking.

As noble as I claimed to be in the lead-up to that farce, I watched Mayweather versus McGregor despite already knowing the outcome, and as this transpires I’ll probably be sucked in too, but should we expect more from ourselves and demand greater spectacles than half-baked ideas set to benefit few, or have we become so uninspired by clickbait media and unimaginative marketing campaigns that we’ll simply consume whatever the gods send us because we’ve lost sight of the fact that our time is worth more?

Only you can answer that one.