Lowry chasing a win at the Barracuda Championship

A superb eagle three at the par-5 18th ensures Shane Lowry enters tonight’s final round of the Barracuda Championship in Reno with every chance of a much-needed win.

To that point the Clara man was grinding without getting anywhere as he traded three bogeys with three birdies as his hopes looked to be slipping from his grasp.

However Lowry dug deep knowing that every shot counts in his bid to break into the coveted top-125 on the FedEx Cup standings in order to ensure he secures his playing privileges for next season. Having split the fairway with a booming 350 yard drive, Lowry sent a towering 4-iron pin seeking from 280 yards away and with his ball coming to rest nine feet from the pin, he made no mistake with the crucial putt.

Now occupying solo 4th and just eight points behind leader, Andrew Putnam in the modified stableford event, Lowry was delighted with how he came through some tough conditions on moving day and is looking forward to taking his chance with 18 to go in Reno.

“It was very hard today,” he admitted. “Very windy and really difficult to pick a club. I just got off to a bad start and just hung in there all day, and I feel like my patience was rewarded with that eagle on the last.

“It’s this format, that’s what’s great about it, and that’s why I’m really enjoying myself this week. You can make a move very quick and I’m going out with a chance today now and I’m excited.”

What pleased him most about his round seemed to be his ability to grind it out and having stuck in there and taken advantage of his eagle opportunity at the last, Lowry is eagerly looking forward to tonight’s final round with the finishing stretch at Montreux Golf & Country Club particularly exciting as it presents all kinds of chances.

“You get to 13 and you really feel like you have chances coming in,” he said.  “Like I missed a three-footer for birdie on 14 so that was very disappointing but I just kept going.I birdied 15, and I bogeyed 16 but bogeys don’t kill you in this format.

“Obviously I was just hoping to birdie the last to be honest. I really felt like if I birdied the last, I’d have a chance going into the final round, but I just hit the most beautiful 4-iron in there and managed to hole the putt..”

There truly is everything to gain this week for Lowry who looks rejuvenated with brother Alan on the bag. A fresh perspective has proved the catalyst and now enjoying his golf again, Shane will know that a ‘W’ this week would mean a two-year exemption and his place in the playoffs with events to spare this season. He’ll be focussed on nothing other than a win this evening but admits that getting over the line will be tough against some stiff competition.

“You know, look, we’re all decent golfers. I think anyone going out tomorrow within a certain score of the lead, no matter what they’re doing, everyone’s the same. It’s as hard to win whether you’ve won before or whether you haven’t won. Obviously I’ve won and I’m going out with a chance tomorrow now and I’m very excited  to see what happens.”

Of the other Irish in the field, Seamus Power got stuck in the mud on moving day and sits in a tie for 27th on 20 points with Pádraig Harrington has been steady but unspectacular and currently shares 51st. While Graeme McDowell would have been hoping for so much more than his 11 points that find him in tied 59th. 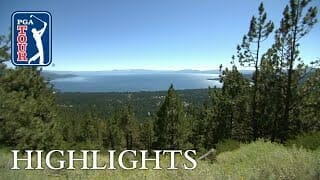