McIlroy admits he’s near his best at Bridgestone 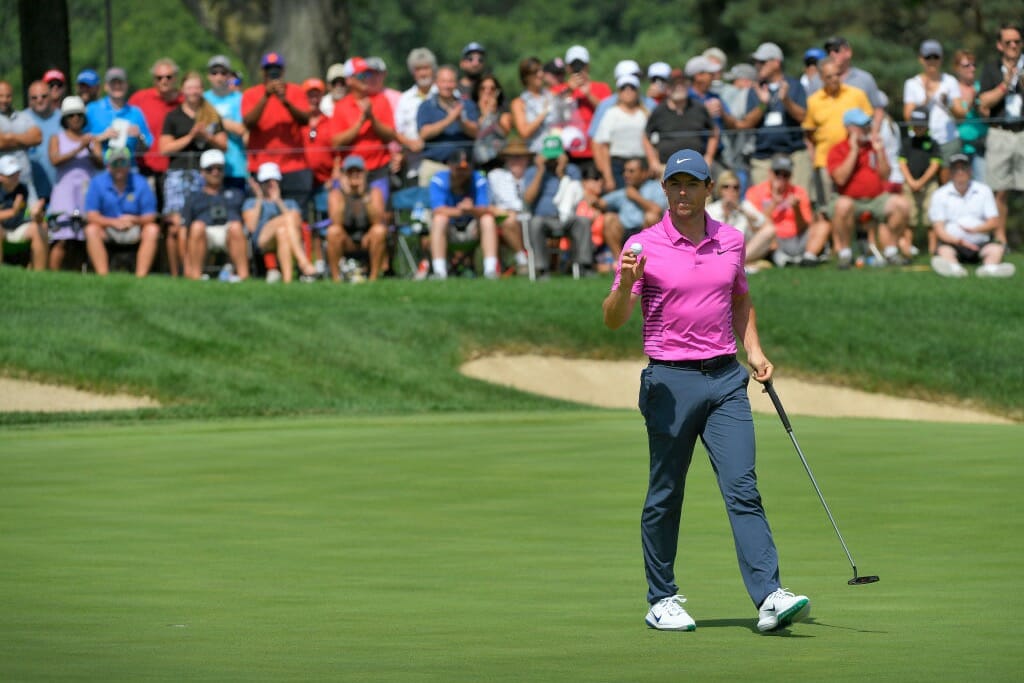 McIlroy posted a three-under par 67 for an eight-under par total, to be trailing just three shots behind the England duo of Tommy Fleetwood (63) and Ian Poulter (67) and next week’s defending PGA Champion, Justin Thomas (64) who head the field on 11-under.

Fleetwood, the reigning European No. 1, continued to impress Stateside in a bogey-free display capped by four birdies from the 10th to the 16th holes on the Firestone course. And the effort in the $10m event certainly will impress his father, Peter.

“This has always been my dad’s favourite event and he came here last year,” said Fleetwood. “He always wanted to get a photograph in front of the Firestone golf ball, so he was really pleased when he came last year.”

McIlroy was also delighted when, after sending his drive some 30-yards left off the second tee to the adjoining fairway, he walked off minutes later with the first of his five birdies.

He also birdied the par- sixth hole in sinking a 19-footer, but dropped a shot at the sixth ahead of a laser-like tee shot into the par-3 seventh to seven feet.

McIlroy bogeyed the 10th and then had seven straight pars before some brilliance from a 17th hole bunker that was measured at just under 30-feet. Then for good measure, McIlroy holed a five-footer on 18 to head to the weekend rounds in a great position in being just three shots of the leading pace.

“It was eventful, an adventure to say the least,” he said. “I was one under standing on the 17th tee and I think if I had to finish 1-under, it would have felt like the worst I could have shot today. So, to get those two birdies on the last two holes is obviously very nice and get a couple closer to the lead.”

“I just felt with some of the drives I hit on the back nine and where I was leaving it, I should have been giving myself chances for birdies and not having to scramble for par. Wedge play, you know,in terms of like direction, they were pretty good, but my distance just wasn’t. I didn’t match it up. I hit it way down there on the 8th hole and left myself 30 feet. I hit it way down there on 13, left myself 30 feet. I flew the green on 10 after hitting a good drive. There were three holes that I should have had birdie chances and I played them in 1-over.”

“So, just a little bit of work on that maybe this evening, but I’m still in with a good chance. I’m only 3 behind heading into the weekend and I’m in a good position”.

Four years ago, McIlroy captured The Open, won the Bridgestone and then a week later lifted the Rodman Wanamaker trophy in winning a second PGA Championship and it prompted a post-round question whether his game is as good now as it was in 2014 and easily the brightest purple patch of his career

“I’m close,” he said. “I’m not quite in control, I’m not swinging it as good as I was back then and I’m working on trying to get it back to there. But, you know, I think as the years go on, I’m more experienced and, you know, even if I’m not playing my best, I can still manage it around and get myself in there.”

“I’m probably as you know, just as good if not better in terms of being a tournament player, if that makes sense, and managing my game. I feel like I’m close to being as good as I was in ’14.”