McGinley stalls as McGovern comes to life at London Club 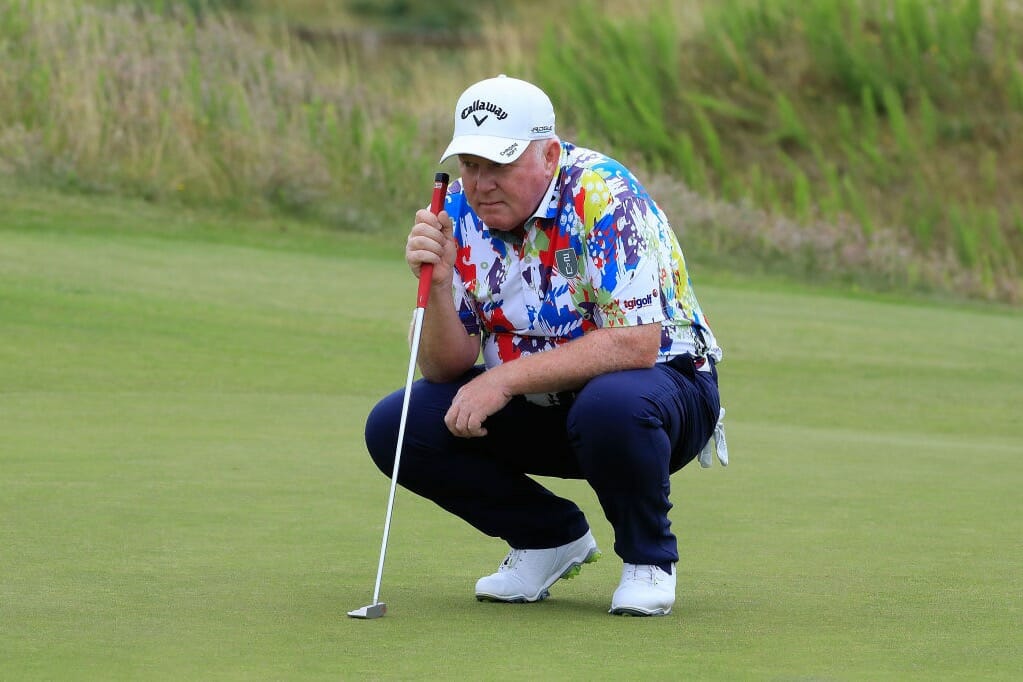 A level par round of 72 saw Paul McGinley drop 17 places down the leaderboard as the hallway cut came into effect at the Staysure PGA Seniors Championship at London Golf Club.

After shooting out of the blocks with a four-under extravaganza in round one, McGinley backed it up like a yoyo in round two and despite five birdies, the Dubliner failed to improve on his promising start in London.

Ronan Rafferty remains within touching distance after an impressive blemish-free 69 moved him inside the top-40.

Yet the story of the day from an Irish perspective was undoubtedly Brendan McGovern who finished like a steam train as he rekindled his hopes of mounting a challenge. The Headfort professional looked out of it at three-over-par through 30 holes but exploded into life with an eagle and three birdies over his last six to respawn into a share of 41st at minus two.

That’s the same number as Des Smyth who finished alongside McGovern after he fired an eagle amongst his solid 70 wallops in round two.

Unfortunately, however, the plus one halfway cut fell one shot too sharp for Phillip Walton (+2) and two too many for Eamonn Darcy (+3).

Magnus P Atlevi and Greg Turner share the Staysure PGA Seniors Championship lead by three shots at the halfway stage after rounds of 64 and 65, respectively.

The Swede backed up his opening 67 with an eight-under-par round to card his lowest 18-hole score since he joined the Staysure Tour as he came from four shots behind to lead. The Kiwi joined Atlevi on 13 under par after his seven-under-par performance as overnight leader Colin

Montgomerie could not improve on his course-record nine under par round of 63.

Atlevi, who last won on the Staysure Tour at the 2016 Paris Legends Championship, began his second round with back-to-back birdies. A further three gains and one bogey saw him join the early pacesetters on Day Two after a four under par front nine.

one dropped shot to set the target after his birdie-birdie finish.

“It’s not every day you make ten birdies,” he said. “I’m driving the ball really well, so I keep getting opportunities to score. I had a couple of eagle putts on the par fives, but you have to make the putts. I’ve been struggling with my putting all year but I’m in a happy place with that right now. I just need to keep doing what I’m doing over the weekend.

“The afternoon is always a bit harder because in the morning the greens haven’t grown, and they are smoother, so you can make more putts. In the afternoon the ball goes a bit further and that makes the course shorter, which allows you to take advantage of some holes.

“To see what Colin and the leading players did yesterday, I knew I had to put the pedal down, because I’m sure the winner will be around 20 under par on Sunday if the weather stays like this.”

Another hot day on the International Course saw Turner light up the leaderboard with his bogey-free five under par front nine as he closed in on the Swede late in the afternoon.

A birdie straight after turn and another on the fourth saw him join Atlevi at the top before the four-time European Tour winner claimed the outright lead with two holes to go. However, Turner was unable to stay there as he made his only bogey of the day on the last but still had a smile on his face at the end of the second round.

“I’ve played pretty well over the first two days. I’ve driven the ball and putted really well,” he said. “The weather has been perfect, and the greens are great, so it’s a good combination and I’m very happy at 13 under.

“If you’re driving the ball well you are going to have lots of chances. The putter has been nice and warm as well, which makes a nice change. We’re only halfway through and there is still a long way to go, but it’s nice to be playing well and teeing off late on Saturday.”

Three shots behind the duo are Santiago Luna, Jean-François Remesy and Jarmo Sandelin, who will look to add the pressure on Moving Day. While Peter Scott matched Montgomerie’s opening day course-record to leap up to tied ninth with the round of the day at London Golf Club.