Shane Lowry carded a final round 69 to finish in a tie for 12th at the RBC Canadian Open and more importantly jumps up 13 spots in the Fed-Ex Cup standings.

Lowry bounced back from three bogeys on his front nine with a barnstorming finish as he birdied 3 of his last 6 holes to finish just outside the top 10 in Canada.

With brother Alan now on bag duties, Canada began of a run of 5 events planned with the end-goal being a top-125 finish on the FedEx Cup rankings and his card secured for 2019, the Lowrys have started as they mean to continue with a timely return to form.

With his exemption for winning the WGC Bridgestone invitational set to expire at the end of the season, Lowrys finish moved him up to a projected 159th in the Fed-Ex standings.

It was also a successful week for Graeme McDowell who finished in a tie for 17th on -13 one shot behind Lowry.

At the head of affairs Dustin Johnson’s only goal Sunday at the RBC Canadian Open was to play the par fives better.
Mission accomplished, and it resulted in a victory.
Johnson birdied all four of the par fives at Glen Abbey Golf Club en route to a 6-under-par 66, and captured his third event of the season by three shots over Whee Kim and Byeong Hun An.

He retained his spot on top of the FedExCup standings with the victory. It was his 19th-career TOUR win, all since 2008. He topped Tiger Woods’ record of 18 in the last decade, and the significance of his accomplishment wasn’t lost on Johnson.
“Obviously I’m doing something very well,” he said. “To even be mentioned in the same sentence as Tiger means a lot. What he’s done for the game, the things he’s done in the game. No one is ever really going to get to that level.”

Johnson said every win is “sweet” but confirmed it’s been more fun to find the winner’s circle since becoming a father.
“To be able to share it with my family is definitely important and definitely means a lot more,” he said. “I talked to Paulina a little while ago and they were watching from home. So it’s always cool to hear that your little man’s watching you on TV.”

There was a weather delay of one hour, 46 minutes on Sunday, but Johnson wasn’t fazed. He made four birdies on the back nine after the delay, and pulled away after playing partner An made a bogey on the par-4 10th.

He spoke about how it was important to hold the led on the FedExCup standings going into The TOUR Championship, and said anytime he could build a lead in the standings, it’s a positive.

“Obviously right now I’m in a very good position,” he explained. “I’m going to have to continue to play well though if I want to be in that number one spot heading into Atlanta for the Tour Championship.” 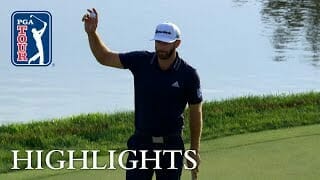