McGinley fades away as Jimenez claims jug and Portrush start 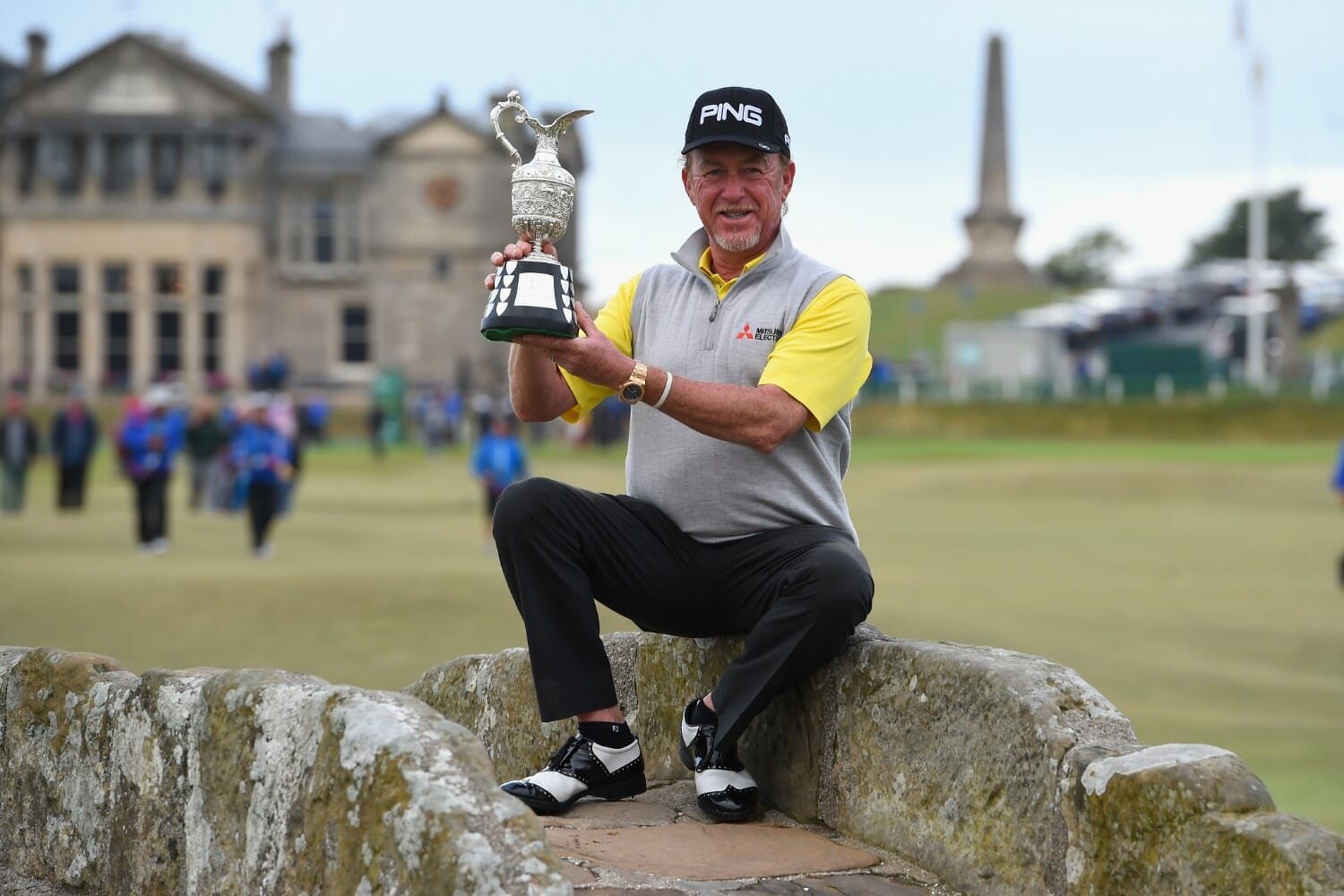 Spain’s Miguel Angel Jimenez has ensured himself a tee time in next year’s Open Championship at Royal Portrush with an emotional victory in the Senior Open.

Jimenez, 54 captured a second over-50s major in just two months posting a final round 69 to win by a shot with a round of 69 for a 12-under par tally on the famed Old Course at St. Andrews with the pony-tailed Malaga golfer denied double Senior Open winning Bernhard Langer, with the German signing for a 68 to finish runner-up in the event for a third time since 2013.

Jimenez not only became the first Spaniard to win the Senior Open since the inaugural event in 1987 but he now joins the late, great Seve Ballesteros as only the second Spaniard to win a major at the Home of Golf.

And the very first drink to find its way into the trophy said Jimenez will be his favourite bottle of Rioja.

“I now will call it my Rioja Jug, yes, of course, it’s amazing”, he said. “I played my first Open nearly 30 years now, and for somebody to say I would not win a Claret Jug well it’s never is too late.”

Jimenez has not contested The Open since 2016 but he got a sneak peek at Royal Portrush when contesting last year’s DDF Irish Open at nearby Portstewart where he finished well behind fellow Spaniard Jon Rahm.

“Bravo and bring it on,” he said smiling widely. “When I played the Irish Open at Portstewart we passed by the Royal Portrush course every day from our hotel and I knew The Open would be there in two years from then.

“I did not get to play Royal Portrush but it looked great and I am now looking forward to getting to play The Open again as I missed it both this year and last year. The last time I played was at Troon in 2016 and now to be going to Royal Portrush will be very special and it will be nice to be in the field as The Open has not been back for many, many years.”

Since turning 50 in 2014 Jimenez has now won six Seniors Tour events with his last two victories being Majors after capturing the Regions Traditions in the US in May and now the Senior Open.

Jimenez commenced his final round enjoying a two-shot lead at nine-under par and after the fourth birdie of his round at the 12th he led by three but then that was cut back to two shots when he bogeyed the 15th ahead of ending with three pars.

Ballesteros captured the second of his two Open Championship title in 1984 at St. Andrews and now Jimenez has joined Seve in lifting a similar claret jug. Jimenez was aged just 20 years back in 1984 and was just a few months into 15-months of mandatory service in the Spanish Army but he now finds himself alongside Seve as a winner at the Home of Golf.

“This is one of my biggest victories and it is amazing to win here,” he said. “This is my second major of the year, and it’s amazing to be the winner of The Open here at St. Andrews the Home of Golf. Seve’s been my a real inspiration through the years, what he’s done. This week, especially the first two rounds when I played with Tom Watson and Bernhard Langer, both of them, the way they were striking the ball, and it’s amazing to play with them.”

Sadly, Paul McGinley’s challenge to become the second Irishman to win the Senior Open ended with a final round 75 for a share of 30th place at five-under par.

The effort earned McGinley €21,151. And it was again the inward half at St. Andrews that took its toll on McGinley having dropped four shots over his closing eight holes. McGinley had played the inward nine in one-over on day one but was eight-over for the next three days while the Dubliner was nine-under for the four rounds over the outward half.