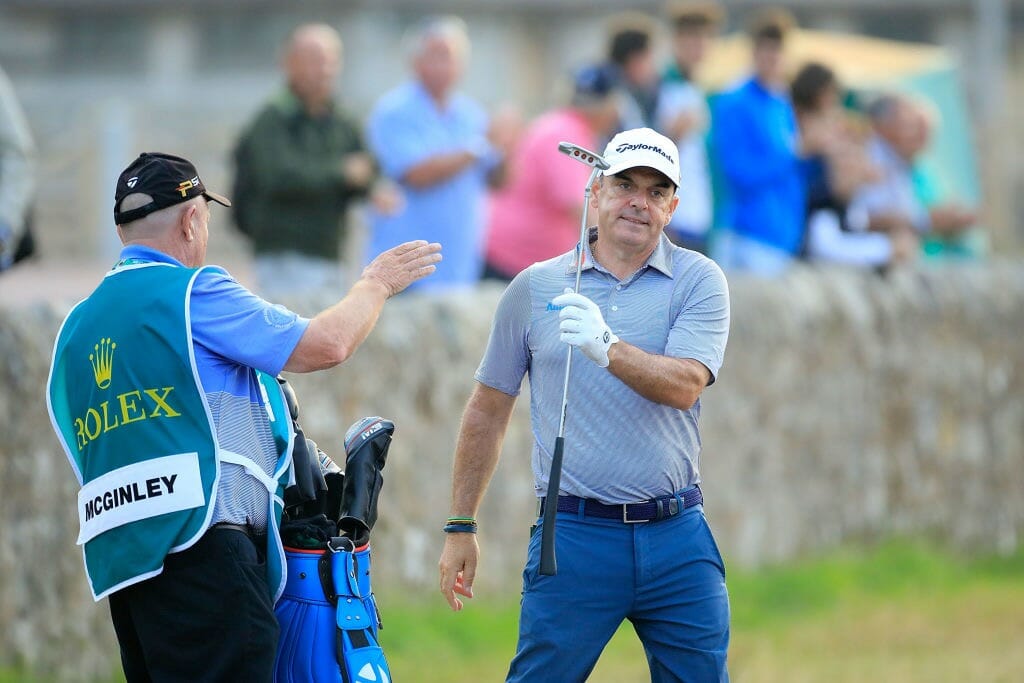 Paul McGinley insists his golf game will need to be better than just ‘okay’ if he is to win the Senior Open championship at St. Andrews.

McGinley posted a third round 72 for a five-under par tally and trails just four shots behind Spain’s Miguel Angel Jimenez heading to the final round of the Senior Open at St. Andrews.

McGinley had been well in contention late in Friday’s second round only to come unstuck with bogeys at 15, 16 and the last in a score of 73 for a five-under tally.

The Dubliner, contesting just his second Senior Open, began day three in the bright but blustery conditions with an opening hole bogey to drop back to four-under but finally found forward gears with three birdies in succession from the fourth hole on the famed Old Course.

McGinley then moved to three-under for his round and eight-under in the $US 2m event when, for a third day running, he birdied the short par-4 10th hole.

He followed that with a bogey at the par-3 11th ahead of an ‘into your face’ fight with the wind over the closing seven holes but dropping shots at 15, a hole McGinley had bogeyed both on day one and two, along with a bogey at 16.

McGinley pared the closing two holes in his score of 72 to be among seven players at five-under par with a total of 23 players within four shots of Jimenez’s two shot lead at nine-under.

“The finishing holes haven’t been kind to me the last couple of days. You just have to play the shots around St. Andrews and I just have not managed to achieve that,” he said in a very downbeat tone.

“I have not been up to the required standard and it all boils down to the fact that I need to play better.

“Everything is just okay.  My putting is okay.  My driving is okay and my irons are okay but I am not hitting the quality shots, and with the way the wind has been blowing the last two days it does require a lot of quality shots.

“I just need to play better tomorrow if I am to come from behind.  It is going to be windy again so it’s a good test at St. Andrews when the wind is blowing.”

Jimenez, 54 battled the bright but very windy conditions in posting a third-round level par 72 and takes a two-stroke lead into the final round.

Seve Ballesteros is the only Spanish-born golfer to have won golf’s oldest Major, in capturing the 1979 Open at Royal Lytham and St. Annes before his memorable fist-pumping triumph five years later at the Home of Golf.

The Senior Open, the over-50s fifth Major, was first staged in 1987 and with Jimenez, nick-named ‘The Mechanic’, now poised to become the very first Spaniard to lift the Claret Jug replica.

“Seve was my reason why I start playing golf and he was like my inspiration as I was 20-years old when he won The Open here,” said Jimenez.

“Well, it would be amazing now if I can join him in that club.  I would love to win but it is going to be a hard day and whoever had the most patience and the most rhythm in these conditions will win.”

Langer looks poised to be Jimenez’s biggest threat having won the event on three occasions since 2010 including a three-shot success a year ago at Royal Porthcawl.

Tom Watson, who like Jimenez and Langer has never won at St. Andrews, had matched his age in shooting a 68 late on Friday and moved into a share of the lead at 10-under when he eagled the fifth and birdied the sixth.

But the eight-time Major champ, who had bid farewell to The Open at St. Andrews in 2015, came unstuck in doubling the par-5 14th and then dropped shots at 16 and 17 in a round of 73 to drop back into a tie for sixth at six-under.

“I am still in a good position just three behind, it’s good to be in the position,” said Watson.

“I wish I had just been a couple shots lower, because on this course, it always bunches up. Right now, I’m in a bunch just behind the leaders and going to have to play some really good golf tomorrow to come out in front.”